Dom DeLuise stars as Dominick DiNapoli, an overweight man who has become addicted to food, something his mother used as a comfort measure while he was growing up. When his cousin Sal dies of obesity at age 39, Dominick’s sister Antoinette (writer/director Anne Bancroft) urges him to see a weight loss doctor. After the exam, the nurse (Madeline Taylor Thomas) begins to read off all of the foods he is to avoid – bread, chocolate, doughnuts, lasagna, etc. His first attempt at this diet fails, as he sneaks bites of lasagna off his brother Frankie’s (Ron Carey) plate when he’s not looking, wrapping it in kale leaves before swallowing. The next day, he helps Mrs. Goodman (Estelle Reiner) pick out some greeting cards at the gift shop he and his sister run, and Mrs. Goodman invites him to a Chubby Checkers meeting where she lost several pounds with help from this support group. Along the way, he meets Lydia (Candice Azzara), who is getting ready to open an antique shop down the street, and Dominick is smitten with her but too shy to ask her on a date. One evening, Dominick has the urge to go on a bender, and calls two members from Chubb Checkers (Richard Karron and Paul Ziegler) to help get him through. Instead, the three discuss food and wind up binging on every scrap of food in the apartment, much to the surprise and dismay of Frankie. Antoinette brings Lydia by the apartment the next morning, and the two decide to begin dating. Dominick soon discovers that maybe love is the best cure of all.

I remember watching Fatso on cable several times over the summer of 1981 (at the age of 16) and enjoying it very much. I had liked many of the films Dom DeLuise had appeared in that were directed by Bancroft’s husband, Mel Brooks (Silent Movie was probably my favorite at the time). The movie, though, has not aged that well, at least for me. I found the comedy and drama somewhat uneven at times, and the plot to be a bit slow. The movie, though, is accurate in its depictions of Italian-Americans, living in a tight-knit community (Dominick and Frankie live in the adjacent apartment upstairs from Antoinette and her family) and more than often screaming at each other. This was Anne Bancroft’s only directorial effort, and began as a short film (which, sadly, is not included in this release) that Bancroft made at the American Film Institute as part of a women’s directing workshop.

Fatso was shot on 35mm film using a very grainy film stock. Shout Factory was provided with an acceptable transfer from 20th Century Fox, with colors that are rather muted (but not faded). Detail is acceptable, although the visible film grain does sometimes make for a softer picture. There are a few noticeable instances of speck, dirt, and minor scratches, but nothing to be overly concerned about. Contrast is also acceptable, with decent black levels that provide adequate shadow detail in darker scenes.

Shout Factory has provided a fairly straightforward DTS-HD MA 2.0 mono soundtrack of the film, with good fidelity and clear dialogue. This is a very dialogue-driven track, so don’t expect much in sonic wowness. It does its job and that’s about it.

Interview with Film Historian Maya Montañez Smukler: Smukler discusses the history of women directors in the US film industry leading up to the release of Anne Bancroft’s Fatso.

Anne Bancroft’s Fatso is an uneven but ultimately bittersweet comedy that showcases the acting range of its star, Dom DeLuise. The movie looks and sounds fine, and it surely is nice to finally have it on Blu-ray, and the newly created special features are a nice touch. 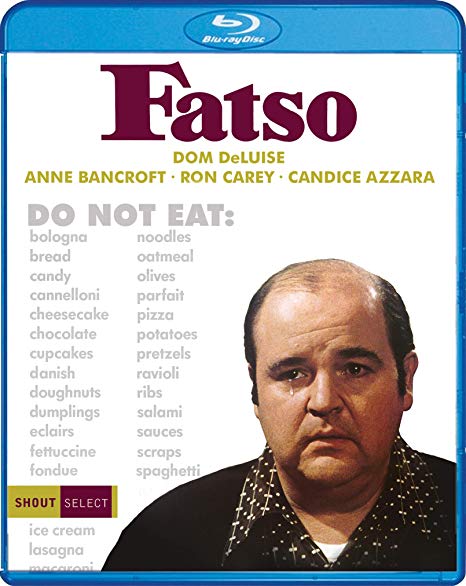