Inconsistent comedy squanders a capable cast and does not find right balance between humor and heart. 2.5 Stars

Father Figures  is the directorial debut of Lawrence Sher, who was the cinematographer on several modern comedies including all three of the Hangover films.  The bawdy approach to the “Who’s your daddy” premise is certainly in that vein.  Owen Wilson and Ed Helms play adult twin brothers who go on a cross country odyssey after learning that their Mother has been lying to them about their father’s identity for decades.

In Father Figures, Owen Wilson and Ed Helms play twin brothers Kyle and Peter Reynolds.  On the day of their Mother Helen’s (Close) wedding to her new husband, Gene (Shearer), Kyle and Peter discover that she has been lying to them about the identity of their biological father for decades.  This sets the hang-loose Kyle and uptight Peter on an odyssey from Boston to Miami and back again as they follow clues about Helen’s past pointing to various individuals who may well be their long lost Dad.

Father Figures tries to balance R-rated lowball humor with a relationship arc between the two estranged brothers at its center.  The result is something of a disappointing mess.  The sex jokes are obvious, repetitive, and not all that clever.  When Wilson and Helms are riffing with each other, there are glimpses of potential for a better movie with humor stemming from their conflicting personalities, but a constant barrage of jokes about their Mother’s adventurous sexual history undermines that potential at every turn.

The plot structure gives it an episodic feel which at least keeps it from becoming boring.  Antics on the road and at the homes of different potential “Dads” mix up the dynamic and balance of power between Kyle and Peter even as it establishes a pattern of hope, disappointment, revelation, and new hope that continues throughout the movie.

The film’s primary asset is a  talented cast that is game for just about anything.  As the anchors for the movie, Wilson and Helms make a decent odd couple, but both of them are squarely in the wheelhouse of characters they have played before.  Viewers cannot help but be reminded of their performances in better written comedies than this one.  The supporting cast is an eclectic collection of Oscar winners (Close, Simmons, Walken), comedy ringers (Shearer, Williams), and, well … Terry Bradshaw (who turns out to be pretty good at playing Terry Bradshaw).

Director Lawrence Sher has spent most of his Hollywood career as a cinematographer and, as one might expect, this is a beautifully shot film.  It achieves a unique look for each of the various locations along the main character’s East Coast road trip without resorting to heavy color filters.  Instead, he relies on lighting, lens selection, and camera placement to  optimize each location and set’s appearance.  He also gets the most out of every single establishing helicopter and crane shot to create a sense of higher production value than you see in most comedies.  Sher’s efforts in collaboration with cinematographer John Lindley are well represented by a sharp and satisfying 1080p AVC encoded rendering on this Blu-ray disc, letterboxed to the film’s 2.4:1 aspect ratio.  Contrast is dialed in perfectly for both night scenes and bright Miami exteriors.

As with most comedies, the film makes fairly subdued use of the 5.1 sound field with the rear channels and subwoofer reserved mostly for supporting music and the rare boisterous sequence such as one involving a train crash.  The DTS-HD MA 5.1 soundtrack conveys the modestly ambitious mix with excellent fidelity.  Additional Dolby Digital 5.1 tracks are available in English Descriptive Video Service, French, and Spanish.

When the disc is first played, the viewer is greeted with the following skippable collection of promos:

Proper extras accessible from the disc’s special features menu include the following:

Deleted Scenes (21:09) 10 scenes not selectable from the disc menu, but chapter encoded.

Pre-menu trailers are identical to the Blu-ray.  The  SD DVD includes the 10 Deleted Scenes that were on the Blu-ray, but not the gag reel.

This Blu-ray Combo Pack includes a paper insert with a code redeemable at digital retailers who support the “Movies Anywhere” or “Ultraviolet” digital copy standards.

Father Figures tries to blend lowball humor with a heartfelt family relationship story, but does not commit strongly enough to either aspect to succeed.  Viewers who are not too demanding and are fans of the film’s talented cast may still enjoy it, but they have all appeared in movies better than this one.  It is presented on Blu-ray disc with a reference quality transfer of the film’s atypically-gorgeous-for-a-comedy cinematography and a solid representation of its conservative audio mix.  Extras are limited to a collection of deleted scenes that expand on some shortened or abandoned sub-plots and a fun but forgettable gag reel. 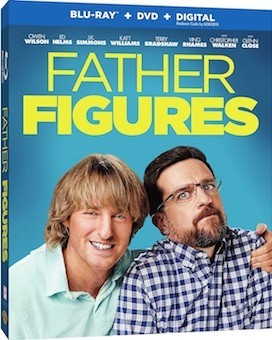