One of the real hard luck kids of network television was Father Dowling Mysteries, a middling crime series that never quite seemed to catch a break.

One of the real hard luck kids of network television was Father Dowling Mysteries, a middling crime series that never quite seemed to catch a break. Its premiere thwarted by the 1988 writers’ strike and its unspectacular ratings during its first run of episodes leading to one network (NBC) dumping it and another one (ABC) picking it up only to hold off its second series of episodes until midseason, it never managed to break into TV’s top thirty shows, and finally the plug was pulled for good at the end of its third season. The CBS/Paramount box of the complete series puts together all three separate season releases from years past with no new masters into one space saving box containing ten discs featuring its made-for-TV pilot film and forty-two individual episodes.

Father Frank Dowling (Tom Bosley) heads up St. Michael’s Catholic Church in Chicago assisted by Sister Stephanie ‘Steve’ Oskowski (Tracy Nelson). Both have inquisitive minds that are always eager to dig deeply for the truth when trouble comes to one of their parishioners or when murder or other crimes somehow come to their attention. Their special calling often grants them entrance to places where ordinary individuals couldn’t or wouldn’t be permitted, and when their garb doesn’t grant them access, Sister Steve’s way with a hairpin opens all doors to their investigations. Back at the rectory, there is also stern housekeeper Marie (Mary Wickes) always ready to grudgingly feed the masses and the Bishop’s bumbling assistant Father Philip Prestwick (James Stephens) who can always be counted on to be in the dark with just about everything. Sergeant Clancy (Regina Krueger) of the Chicago PD is usually around to make an arrest, but she has a nasty habit of never listening to the Father or the Sister and ignoring the obvious until the duo themselves bring the guilty parties to confession or justice.

Yes, Father Dowling Mysteries is a very formulaic crime series. Not quite a mystery show in the Murder, She Wrote style where clues are clearly presented allowing the audience to play along and put the pieces together to guess the culprit before his identity is revealed nor is the show ordinarily in the Columbo mold of showing the crime and perpetrator and then watching the detective arrive at the solution we already know. This show offers for each of its crimes three or four suspects and has its priest and nun then piece by piece eliminate a suspect from their various investigations. Sometimes the two go undercover out of their religious apparel to gather their information, and occasionally they get caught and are in danger of elimination, but the mysteries aren’t anything special in this series, and it’s usually very clear who the guilty parties are long before our main characters finally reach their own conclusions.

Over its three season run, there were certainly some unusual episodes. The writers allowed both of their stars the opportunity to play dual roles: Tom Bosley playing the title character and his identical twin and Tracy Nelson in one episode playing a member of the royal family who switched places with the Sister for an afternoon (shades of The Prince and the Pauper) and in another playing a streetwalker who assisted the nun in her investigation. One episode had a whimsical angel (played by the acerbic James McEachin) come down to assist the duo in their quests. Another featured the two stars serving as models for a new TV pilot being shot featuring a priest and a nun as a detective duo. There was even one episode that alternated a present day mystery with a 1930s noir novel based on real-life Chicago characters. And during the run of the series, it was revealed that both Father Dowling and Sister Steve had had worldly lives before entering the religious life: Father Dowling unknowingly fathering a son (who grew up to be a man suspected of murder played by John Rubenstein) and Sister Steve engaged to be married to a man (William R. Moses who was actually married to Tracy Nelson at the time of filming) she later left.

After four years of playing the dithering sheriff of Cabot Cove who could never solve a case without the assistance of Jessica Fletcher on Murder, She Wrote, it must have been a great relief to Tom Bosley to land the role of Frank Dowling and finally be allowed to solve his own cases. As always, his warm, amiable presence made the show a soothing, untaxing way to spend an hour each week. Tracy Nelson’s character has been written as practically a superwoman with the expert driving skills of a stunt car driver, lock picking skills of master craftsman, and skilled in bowling, one-on-one basketball, goal-tending in soccer, and hustling at pool: all designed to make her worldly-wise Sister Steve someone who can relate to everyone on his own terms. The always welcome Mary Wickes is reliably crusty even if the writers don’t generally give her comedy material worthy of her gifts. James Stephens’ bumbling ineptitude and complete cluelessness to everything around him pushes the bounds of absurdity to the breaking point. Among the more famous guest stars during the run of the series (in addition to those already named) were Tracy Nelson’s real-life grandmother Harriet Nelson (as a nun who clashed with Wickes’ Marie), Ed Winter, Susan Blakely, Leslie Nielsen, Peter Scolari, Stella Stevens, Sada Thompson, John Slattery, Anthony La Paglia, Steven Culp, Tim O’Connor, Yaphett Koto, Bob Dishy, Roscoe Lee Brown, Candy Clark, David McCallum, Sarah Douglas, Bill Macy, Mitchell Laurence, Mark Moses, Charles Frank, Dan O’Herlihy, Kevin McCarthy, Ivan Dixon, and Richard Dawson.

Here are the forty-three entries contained on ten discs in this complete series set:

3 – What Do You Call a Call Girl Mystery

4 – The Man Who Came to Dinner Mystery

7 – The Face in the Mirror Mystery

14 – The Ghost of a Chance Mystery

24 – The Devil in the Deep Blue Sea Mystery

There has been no remastering of the original disc releases for this series, so the 1.33:1 transfers offered here are identical to previous issues of this show. Likely shot on videotape and then transferred to film, sharpness is never very acute, and the soft pictures often seem dated in appearance with brownish hues to the photography and a muddy color palette that’s not very distinguished (admittedly, season three episodes are the strongest looking of the batch). Loaded with moiré patterns and aliasing and with some age-related specks and a little debris, the lack of overscan on modern TVs also occasionally reveals boom microphones over the actors’ heads especially evident in “What Do You Call a Call Girl Mystery.”

The Dolby Digital 2.0 stereo sound mixes on the episodes are quite nice with usually easy to understand dialogue in the center channel and the sound effects and background score given a wider spread into the left and right channels. There are no problems with age-related hiss, crackle, thumping, or flutter.

Episodic Promos: almost every episode contains the 32-second promotional tag for that episode paired in the menu with that particular episode title on the disc.

Not one of the great mystery series of television but certainly a comfortable and pleasant way to spend an hour of crime procedural, Father Dowling Mysteries now is offered in an attractively priced, space-saving package for fans of the show who might not already have it. 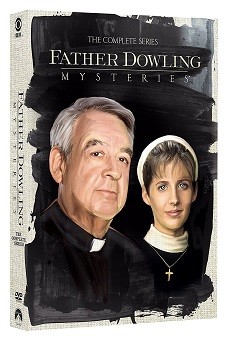