Forum List What's new Dark Style Change width
Log in Register
What's new Search
Menu
Log in
Register
Navigation
Install the app
More options
Dark Style
Close Menu
Posted on May 16, 2021 by Sam Posten
You are using an out of date browser. It may not display this or other websites correctly.
You should upgrade or use an alternative browser.

People on 'ludes should not drive! - Recommended 4.5 Stars 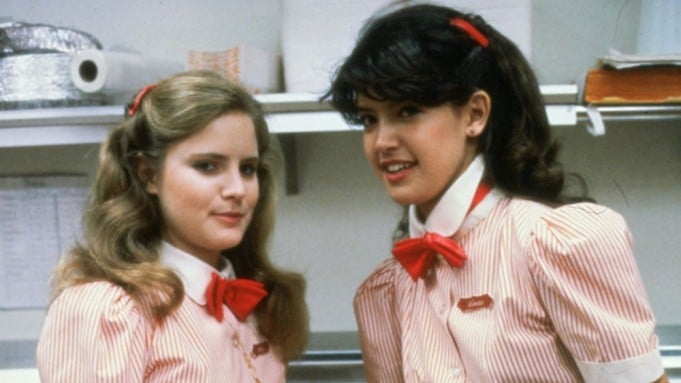 In the go-go early 1980s kids are fast-tracked on the route to becoming adults. For the students of Ridgemont High this means being thrust into jobs they hate, taking drugs, and experiencing sex early. Stacey (Jennifer Jason Leigh) hasn’t had sex yet but wants to, and is getting advice from much more experienced Linda (Phoebe Cates). Brad (Judge Reinhold) jumps from one embarrassing fast food job to the next but still feels like a big deal on track for management success. Damone’s (Robert Romanus) gig is scalping concert tickets at jacked up prices. Mark (Brian Backer) is lovelorn at the movies, and can’t seem to catch the signs that he’s got the greenlight for romance when it’s right in front of him. And Spicoli (Sean Penn), well Spicoli is going to float through life on a cloud of smoke, catching waves and hanging with his buds, even if it kills him.

The adults are all non-existent except for a handful of teachers. Mr. Hand (Ray Walston) is the strict disciplinarian, but even he has a soft side. And Mr. Vargas (Vincent Sciavelli) may be a morbid goof but somehow he managed to marry above his station.

At the center of all this isn’t the highschool, it’s the mall. Heckerling herself caught on to the rise of mall culture and managed to define it and satirize it before America woke up to its coming dominance. She worked with Cameron Crowe to change the focus from the school to the mall despite the heavy importance he put on the former in the book the film is based on, and that made all the difference. 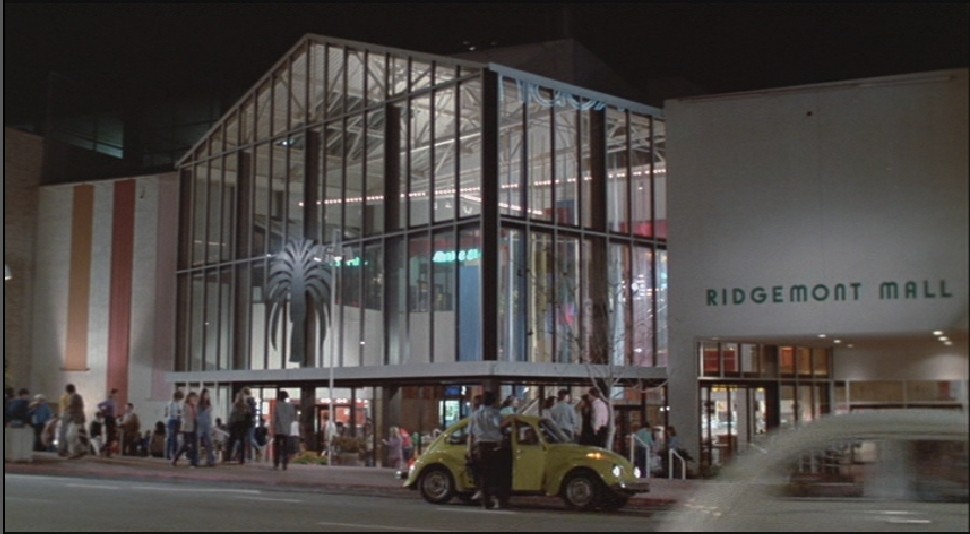 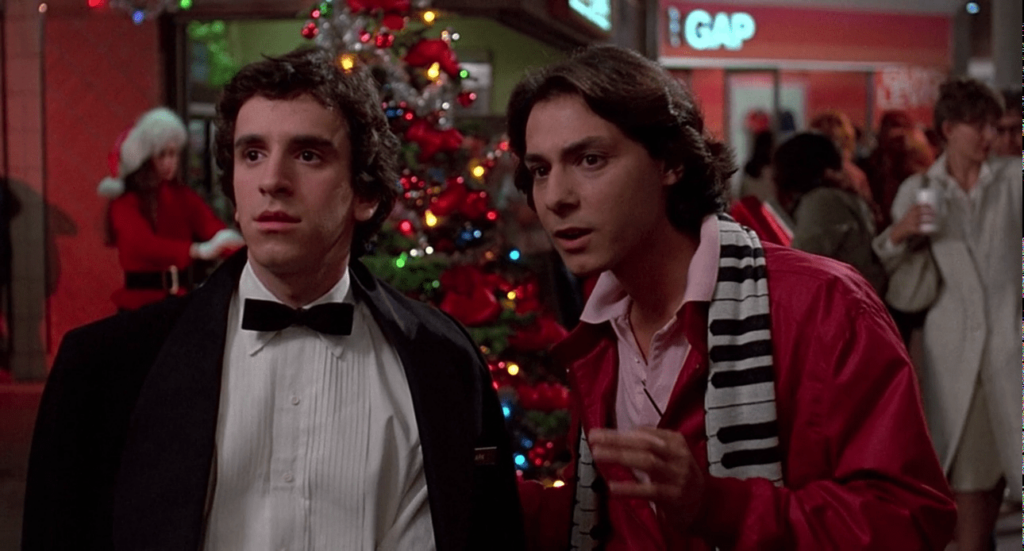 Featuring over a dozen young actors that would go on to stardom (and at least 3 future Oscar winners!), Fast Times hit on all cylinders. While the studio worried it would be a flop, or worse, get saddled with an X rating due to full frontal nudity, early 80s teens and young adults found a film that spoke to an entire generation. Core to their embrace of this film was pairing fully formed characters with real problems to get through and letting them work their way through it in smart, relatable ways. Against a backdrop of “Just say no”, abstinence based sex-ed, abortion shaming and other preaching from adults, this was radical stuff.

While Sean Penn’s Spicoli may have influenced a generation of pot heads, having a wily actor like Penn play him with heart and from a place of love cemented Spicoli as more than a one dimentional dirt bag.

And then there is the infamous Pool scene. Phoebe Cates busting out of her bikini in Judge Reinhold’s fantasy, set to The Cars’ Moving in Stereo was instantly iconic and stands the test of time as one of the best coming (ha) of age scenes in film history. What gets little fanfare is that the film simply moves past it. It’s an embarrassing scenario but one that happens to people all the time, and they aren’t scarred for life. It’s that kind of truth that enables film to transcend time, helping all of us to get past our own hangups, embarrassments, and wishes that we had played some traumatic scene in our own lives differently. This is the water we swim through. 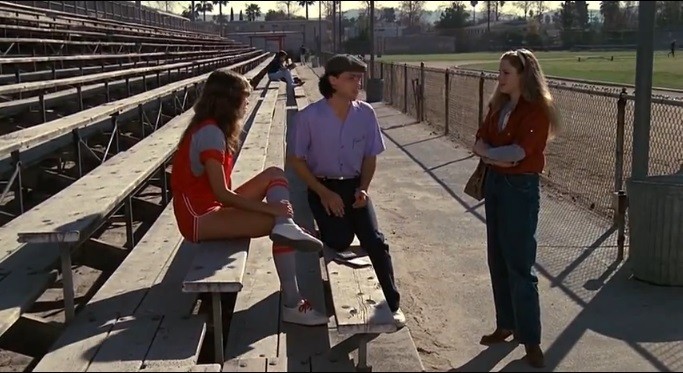 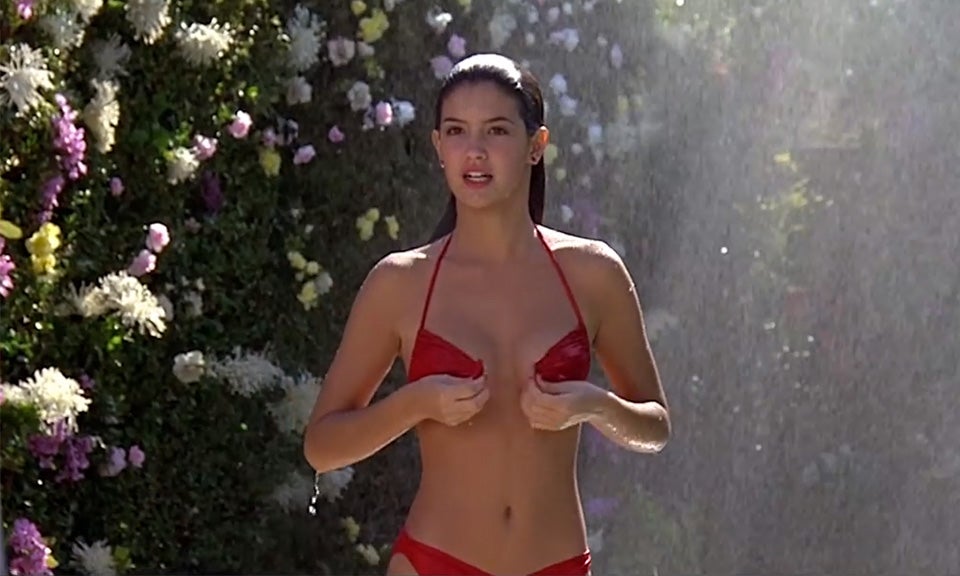 Much has been made online about how this version of the film has a different, tighter crop, but both Criterion and Heckerling have stated authoritatively that this is how the film is meant to be seen. It feels a bit claustrophobic to me, and I am willing to believe that was intentional and matches the theatrical release. I was way more thrown by the grain throughout and a number of instances of ADR not matching up (watch the girls lips at the pizza place at the beginning). The color is very well done and I am satisfied this is about as good as the film can look. There is a good write up in the book about the scan process and I’m curious if we will ever see the full 4k res scan. Per other forum posters the thought is Universal themselves will release the 4K disk down the road, sign me up for that when it comes out. My call is that the film was originally shot using an Ultricam 35 with full open matte and this transfer uses the correct SMPTE crop.

From the book: “This new digital transfer was created in 16-bit 4K resolution on a Lasergraphics Director film scanner from the 35mm original camera negative. Thousands of instances of dirt, debris, scratches, splices, and warps were manually removed using MTI Film’s DRS, while Digital Vision’s Phoenix was used for jitter, flicker, and small dirt.”

Outside of the crop the film has a constant layer of grain that comes from the OCN. Many shots were soft in the original and this scan presents them as shot. The colors are beautifully recreated and match the original intent of the theatrical presentation. Again, when the 4K arrives that won’t ‘fix’ the grain or softness because they are core to the film as shot, so it will be interesting to see if any real improvements can be found in resolution alone. 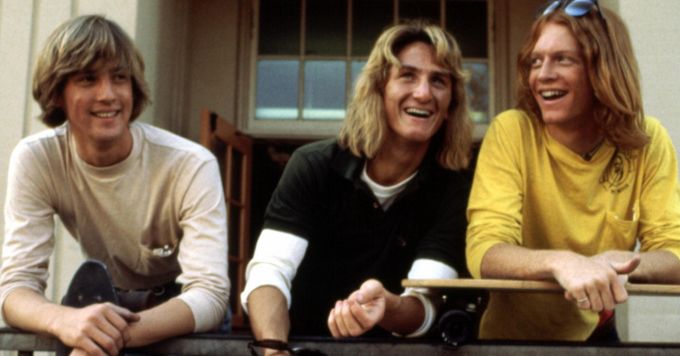 Again from the included booklet: “The 5.1 surround sountrack was created in 2004 by the Universal Studios Sound Department from the original 35mm DME magnetic track and the half inch magnetic music masters. Additional restoration was performed by the Criterion Collection.”

Dialogue is crisp and fun. No significant LFE. The music is glorious and half the reason for the film’s success. Moving in Stereo never sounded better.

Per TheUncool.com:
Heart wrote a song for the film called “Fast Times”. It was not used and later appeared on their Private Auditions album. 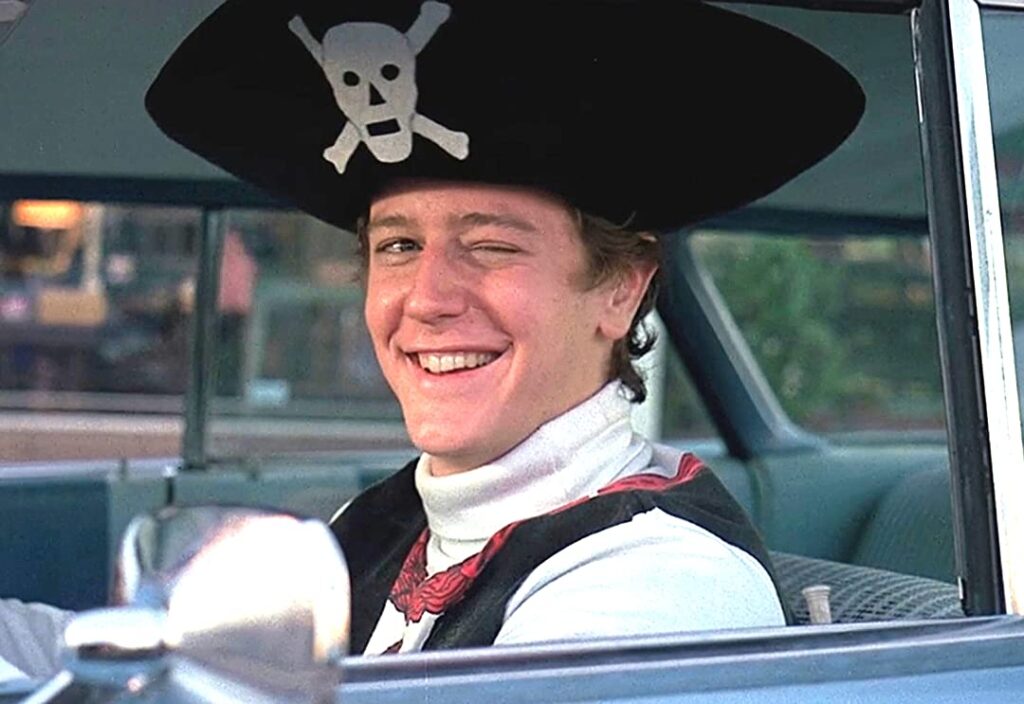 The standout here is a new video interview of Heckerling and Crowe moderated by filmmaker Olivia Wilde. I’ll say this at the top of my lungs: Olivia Wilde needs her own talk show. She guides two very strong personalities through their magnum opus together and really elicits great responses. It’s clear that she really ‘gets’ this film and is a smart and thoughtful appreciator of cinema. I really don’t follow a lot of celebrities so wasn’t really familiar with her outside of a few films, but she is very talented in this arena.

Other extras:
New, restored 4K digital transfer, supervised by director Amy Heckerling, with 5.1 surround DTS-HD Master Audio soundtrack on the Blu-ray
Audio commentary from 1999 featuring Heckerling and screenwriter Cameron Crowe
Television version of the film from the eighties, featuring deleted and alternate scenes
Reliving Our “Fast Times at Ridgemont High,” a 1999 documentary featuring interviews with cast and crew
Audio discussion from 1982 with Heckerling at the American Film Institute
English subtitles for the deaf and hard of hearing
PLUS: An essay by film critic Dana Stevens and, for the Blu-ray edition, a new introduction by Crowe 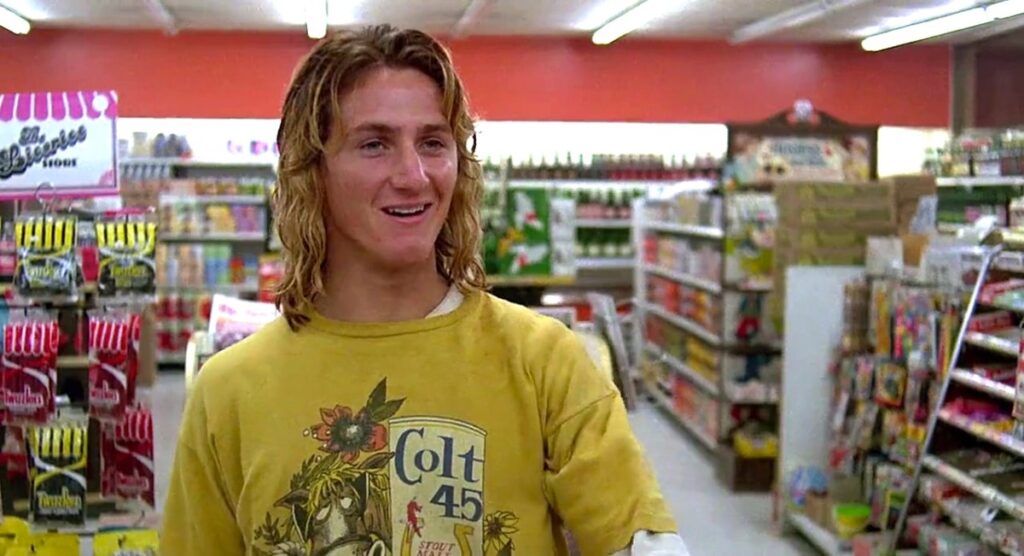 While I would have loved both a 4K version of this release and more in the way of new extras, what we have here is still a strong release, especially for those who already love the film as much as I do. The addition of the TV cut as an extra is a pretty cool idea and Wilde’s interview of Crowe and Heckerling is worth a rental or buy all on it’s own. Definitely recommended.

The adults are all non-existent except for a handful of teachers.
Click to expand...

I always found it odd that they show Stacy's mom saying good night to her before she sneaks out on a date since it's the only appearance of a parent in the movie.

Speaking of the music, I was happy to hear The Go-Gos got into the Rock And Roll Hall of Fame if only because of how good the opening of this movie is with "We Got The Beat".

TravisR said:
I always found it odd that they show Stacy's mom saying good night to her before she sneaks out on a date since it's the only appearance of a parent in the movie.
Click to expand...

But Stacy’s mom has got it goin on

Sam Posten said:
But Stacy’s mom has got it goin on
Click to expand...

That video really should have been included with the Criterion.

Also, RIP Adam Schlesinger, one of the early victims of the COVID crisis.

“ I’ll say this at the top of my lungs: Olivia Wilde needs her own talk show. She guides two very strong personalities through their magnum opus together and really elicits great responses. It’s clear that she really ‘gets’ this film and is a smart and thoughtful appreciator of cinema. I really don’t follow a lot of celebrities so wasn’t really familiar with her outside of a few films, but she is very talented in this arena.”

She is also an emerging great director having directed the hilarious Booksmart.

Tino said:
She is also an emerging great director having directed the hilarious Booksmart.
Click to expand...

Booksmart is a wonderful film! My wife and I were both surprised at how good it was and how much we enjoyed it.

Sam Favate said:
That video really should have been included with the Criterion.

Also, RIP Adam Schlesinger, one of the early victims of the COVID crisis.
Click to expand...

I suspect if the song were a UMG song it would be. But it looks to be managed by BMG ...

Seeing this as a 13 year old film geek in 1981 was revelatory as it was the first youth film of the decade to capture the era's cultural vibe and that great opening is the ultimate 80's suburban mall experience (where I would go to see DAWN OF THE DEAD at midnights). Spicoli was an instant icon and it was one of those teen films that made you feel good about being a teen, despite all the bad shit. My older brother was outraged the abortion scene was so cavalier. I thought it was real and how I would have acted.

I was still in high school when this movie came out and it is one I have yet to add to my collection but I plan on adding the release from Criterion soon.
You must log in or register to reply here.