Forum List What's new Dark Style Change width
Log in Register
What's new Search
Menu
Log in
Register
Navigation
Install the app
More options
Dark Style
Close Menu
Posted on November 4, 2019 by Todd Erwin
You are using an out of date browser. It may not display this or other websites correctly.
You should upgrade or use an alternative browser.
Mindless Fun 4 Stars

Fast & Furious Presents: Hobbs & Shaw is an audience-pleasing good time that doesn’t necessarily require the viewer to have seen any of the F&F films.

There is a line about 38 minutes into Fast & Furious Presents: Hobbs & Shaw that sums up the movie’s premise rather well: “Great, so we’re being chased by the Terminator.” The plot is a bit ludicrous and borrowed from many other movies (particularly recent ones like Mission: Impossible-Fallout and Avengers: Infinity War), with an evil corporation known as Enteon developing a deadly virus meant to wipe out much of the world’s population in order to save the planet, and have enlisted a cyber-enhanced former MI:6 agent Brixton (Idris Elba) to hunt down the rogue MI:6 agent, Hattie Shaw (Vanessa Kirby), who has injected herself with the time-release capsules containing the virus in order to prevent it from falling back into the hands of Enteon. Both MI:6 and the CIA have enlisted Hobbs (Dwayne Johnson) and Hattie’s brother Shaw (Jason Statham) to team up, find Hattie, retrieve the virus, and take down Brixton. That’s quite a mouthful, but it is the chemistry between the four leads (Johnson, Statham, Kirby, Elba) and the over the top direction by David Leitch (Atomic Blonde, Deadpool 2, John Wick) that make the audience forget just how silly the plot and its devices are. The movie is built primarily in the love-hate relationship between Hobbs & Shaw that was first introduced in Furious 7 (which, admittedly, this reviewer has not seen), and it is their banter that makes up much of the comedy in the film, along with cameos by Helen Mirren, Eiza Gonzalez, Ryan Reynolds, and Kevin Hart. The movie does run a bit long at 137 minutes and could have been trimmed a bit here and there, but it is still mindless fun.

Hobbs & Shaw was captured at 2.8K and 3.4K resolutions using Arri Alexa Mini and SXT cameras, then completed as a 2K digital intermediate with a theatrical aspect ratio of 2.39:1. Universal’s Blu-ray release is outstanding, with an extremely faithful AVC-encoded 1080p presentation that continues the studio’s track record of exemplary releases on the HD physical media format. Detail is exquisite, from beard stubble to fabric textures. Colors are bold, vibrant, and not overly saturated. Contrast is also excellent, with deep black levels that retain a great deal of shadow detail.

The Dolby Atmos track on Hobbs & Shaw is never afraid to hold back any punches. This is a loud and active mix, with sounds and music emanating from just about everywhere when needed. LFE is also strong but never overly boomy, helping to accentuate explosions and add an extra low end to the many hip-hop tunes in the soundtrack. Even with all of the noise, dialogue is still clear and understandable throughout.

As with many of Universal’s more recent Blu-ray releases, the Special Features automatically begin after the movie concludes. They are also available individually from the Bonus menu.

Alternate Opening (1080p; 10:14): The same first ten minutes from the film, edited in a different fashion.

Progress of a Fight Scene with Director David Leitch (1080p; 4:57): The director walks the viewer through the making of a fight sequence.

Hobbs’ Family Tree (1080p; 3:20): The importance of the theme of family within the Fast & Furious franchise and Hobbs & Shaw in particular.

Stunt Show and Tell (1080p; 3:41): Director David Leitch walks the viewer through each step of an action sequence.

Keeping It in the Family: A Conversation with Roman and Dwayne (1080p; 5:02): The two discuss their long-term friendship.

Audio Commentary with Director David Leitch: The director covers a lot of ground in this track, from how he became involved in the film, creating the action set-pieces, casting, etc.

Digital Copy: An insert contains a code to redeem a digital copy from Movies Anywhere.

Hobbs & Shaw is mindless fun, and the Blu-ray presents the film as near perfectly as possible. 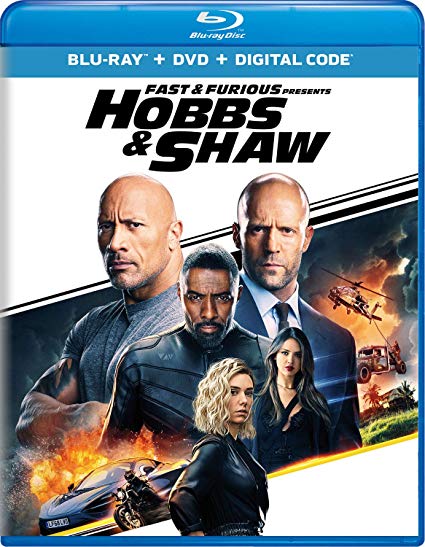