Warner brings Fantastic Beasts: The Crimes of Grindelwald­­ to 4K UHD Blu-ray with a stunning transfer, but the movie itself has its own set of problems.

I rather enjoyed Fantastic Beasts and Where to Find Them when I reviewed the movie on 4K UHD Blu-ray nearly two years ago, and had been looking forward to its sequel, Fantastic Beasts: The Crimes of Grindelwald. To say the sequel was a letdown would be an understatement, but as the end credits rolled, I asked myself, what just happened over the last two plus hours? Apparently, I’m not the only one, the film garnering a measly 37% on Rotten Tomatoes (with a 59% audience score), scoring slightly better on Metacritic with 52%.

The dark wizard Grindelwald (Johnny Depp) has escaped the confines of his New York prison, fleeing to London in search of Credence Barebone (Ezra Miller), in an effort to weaponize him in the wizard’s attempt to, pardon the expression, rule the world. Meanwhile, magizooligist Newt Scamander (Eddie Redmayne) has arrived back in London, having been given an ultimatum – join the Ministry or have his travelling privileges revoked. When he refuses, he is tasked by Albus Dumbledore (Jude Law) to travel to Paris to find Credence before Grindelwald does. Newt is joined by Muggle Jacob (Dan Fogler), who is also searching for his true love Queenie (Alison Sudol). The team is reunited when they find Auror Tina (Katherine Waterston) in Paris, who is also on the trail for Credence. The film contains several more characters and subplots to make one’s head spin, and then throws in a few more just to completely confuse you. There is a final showdown between the Ministry Aurors and Grindelwald, with lots of swirling visual effects, but nothing really exciting. One member of Team Newt switches sides, a link between Grindelwald and Dumbledore is revealed, as is Credence’s true identity.

To be somewhat fair, one should know going in that The Crimes of Grindelwald is the second of a proposed five-part film series whose main intent is to keep the Wizarding World franchise alive and kicking now that the Harry Potter films have run their course. The problem is that this second entry isn’t nearly as fun or magical as the first Fantastic Beasts, too overstuffed with characters and subplots, but ultimately gaining very little traction in telling its pre-Harry Potter epic story. It is even more disheartening when you realize the talent involved here – a screenplay by J.K. Rowling, director David Yates (who helmed the previous installment and the last four Harry Potter films), the top-notch cast, etc. It should also be noted that this review is of the theatrical cut, and not the Extended Cut, which is only available on digital.

Fantastic Beasts: The Crimes of Grindelwald­­ arrives on 4K UHDS Blu-ray in an impressive 2160p HEVC-encoded transfer with both HDR10 and Dolby Vision high dynamic range that preserves the film’s theatrical aspect ratio of 2.39:1. Captured at 6.5k resolution on Arri Alexa 65 cameras and completed as a 4k digital intermediate, detail and overall clarity is exceptional, from minute wrinkles in costumes to individual hais on some of the creatures featured in the movie. Colors are bold and vivid when they need to be (such as Newt’s basement or the Circus Arcanus sequence), otherwise they appear natural and consistent. Contrast is also very good, providing deep blacks with high levels of shadow detail. I should mention that the disc was viewed on HDR10-capable equipment.

Every now and again, Warner surprises me and releases a disc with an Atmos track and foregoes a redundant DTS-HD MA5.1 track, giving me hope that future releases will follow suit. Fantastic Beasts: The Crimes of Grindelwald­­ is such a disc, and we may have to wait until Aquaman surfaces to see if the this becomes a trend (more often than not, it tends to be a rare one-off instance). The Atmos track is a pleasing one, with very active surrounds and heights where necessary, and clear dialogue that is well-prioritized. LFE, though, is somewhat lacking where one may expect it to really kick in.

Wizards on Screen, Fans in Real Life (1080p; 19:22): Ezra Miller (Creedence from Fantastic Beasts) and Evanna Lynch (Luna Lovegood from the Harry Potter series) discuss their love of Wizarding World and take a look at a few scenes from the movie.

Digital Copy: An insert contains a code to redeem a digital copy (in UHD where available) on Movies Anywhere of both the theatrical and extended cuts of the film.

For those that really enjoyed this film, they are in for a treat with exceptional video and audio, plus a decent set of special features. 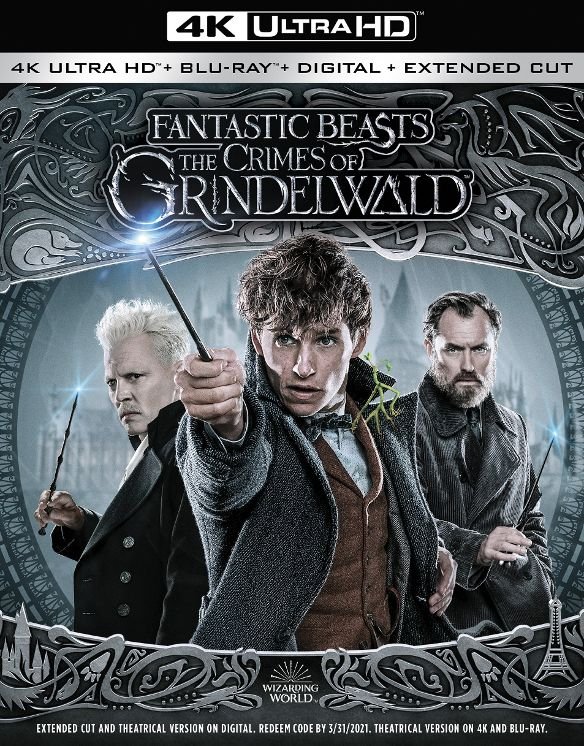