A prequel of sorts, Fantastic Beasts and Where to Find Them introduces several characters that were mentioned as backstory in the Harry Potter movies and books, and forms an interesting jumping off point as an original spin-off from that franchise. Four-time Harry Potter director David Yates returns to helm this film with a screenplay by J.K. Rowling.

When the Harry Potter series of books and movies came to an end with Harry Potter and the Deathly Hallows, many thought that would be the last we ever saw of the Wizarding World. The popularity never waned, with the movies being re-issued multiple times on both DVD and Blu-ray in several different incarnations, not to mention the sell-out crowds at the Harry Potter extensions to the Universal Theme Parks in Orlando and, more recently, Hollywood. The films’ producers knew there was a treasure trove of backstory that the author, J.K. Rowling, had stored away, so going to the well to launch a spin-off using that history seemed like a no-brainer.

Taking place in pre-Depression New York, magizoologist Newt Scamander (Eddie Redmayne) arrives with a suitcase filled with magical creatures, hoping to make his way to Arizona to release a rare Thunderbird into the painted desert. When Newt quite literally runs into Jacob Kowalski (Dan Fogler), several of the creatures escape, including a niffler, a platypus-looking animal that likes to steal shiny objects. Newt chases the niffler into a bank, where Jacob is applying for a loan to open a bakery, but during Newt’s attempt to capture the niffler, Jacob witnesses Newt’s magical abilities. This does not sit well with Tina Goldstein (Katherine Waterston), a demoted Auror with the Magical Congress of the United States (MACUSA). Tina takes Newt and Jacob into custody at her apartment that she shares with her sister, Queenie (Alison Sudol), putting them up for the night until she figures out what to do with them.

Meanwhile, something is wrecking havoc on New York, destroying buildings and murdering citizens. MACUSA Director Percival Graves (Colin Farrell) is investigating the matter, and comes to the conclusion that it is the creatures that escaped from Newt’s bag, and has Tina, Queenie, Newt, and Jacob arrested, erasing Jacob’s memories and sentencing the others to death. The three escape, and uncover a much darker secret as to who is destroying the city and why, and who is ultimately behind it all.

As the Harry Potter films progressed, each story was darker and more mature in tone, which made sense as the audience of the films and books also matured. That is why it is no surprise that Fantastical Beasts is a film aimed at a much older audience than the first Harry Potter. The four main characters are apparently in their late 20s and early 3os, about the same age as the audience that grew up with the series, and there is some sexual innuendo scattered about, particularly the flirting between Jacob and Queenie, not to mention the very odd attempt at capturing the erumpet at the Bronx Zoo. There is also much darker tone in this film, dealing with racism (witches against muggles/no-maj’s) and suppressing one’s true identity. And MACUSA headquarters is not a mystical and magical place like Hogwarts or Diagon Alley. Both director David Yates and author J.K. Rowling (who also penned the screenplay) know their audience well, keeping enough fantasy and wizardry to keep them entertained and hungry for more stories, although the story does start off slow but the pace does gradually build as we get to the final act. As also expected, the technical merits do not disappoint, with beautiful production design (New York was recreated at Warner’s London studios and thru CGI) and wonderfully rendered creatures. A lot of care was also taken with the casting. Eddie Redmayne is awkwardly appealing as Newt, someone who is not real comfortable with his abilities or around people. Katherine Waterston and Alison Sudol have the right kind of chemistry where you can easily believe them to be sisters. Dan Fogler (whom fans of ABC’s The Goldbergs may recognize as Uncle Marvin) is hilarious and sympathetic as the innocent No-Maj with whom the audience can relate to. Finally, Colin Farrell is mysterious enough as the MACUSA director that keeps the audience guessing as what his real agenda is.

Fantastical Beasts and Where to Find Them was captured at 3.4K resolution on Arri Alexa XT Studio cameras and completed as a 4K digital intermediate. This is another reference quality 2160p transfer with HDR from Warner. Fine detail is exceptional, revealing intricate textures in the walls and costumes as well as on the CGI creatures. Colors appear natural even though they are somewhat muted (obviously an artistic choice), but there are noticeable gradations in colors that you won’t see on the Blu-ray edition. Contrast is also very strong, with deep blacks that retain fine shadow details and whites that are bright but never clip.

Both the Blu-ray and UHD discs offer up two surround options in English: Dolby Atmos (with a Dolby TrueHD 7.1 core) and DTS-HD Master Audio 5.1. The clear winner, even for those without a true Atmos setup (like myself), is definitely the Atmos track. This is a much wider and more immersive mix, even when played back in a 5.1.2 configuration with Pro-Logic IIz enabled. The front stage had much more breathing room as action and actors traveled from one side of the screen to the other, and action sequences were much more lively with the surrounds and additional front heights. LFE was also more prevalent on the Atmos track, but never booming or overpowering. Dialogue was clear and understandable, and never drowned out by the mix. This is another reference-quality track.

Before Harry Potter: A New Era of Magic Begins! (1080p; 15:31): Possibly the more interesting featurette on the disc, we get a look at how the film came to be developed, casting the four key roles, and how the film ties into the Wizarding World of Harry Potter.

Fantastical Beasts may start off slow, but it’s a fun ride that gains steam as it nears its conclusion, setting up what could be an entertaining franchise. Video and Audio are reference quality, although the special features are mostly average. 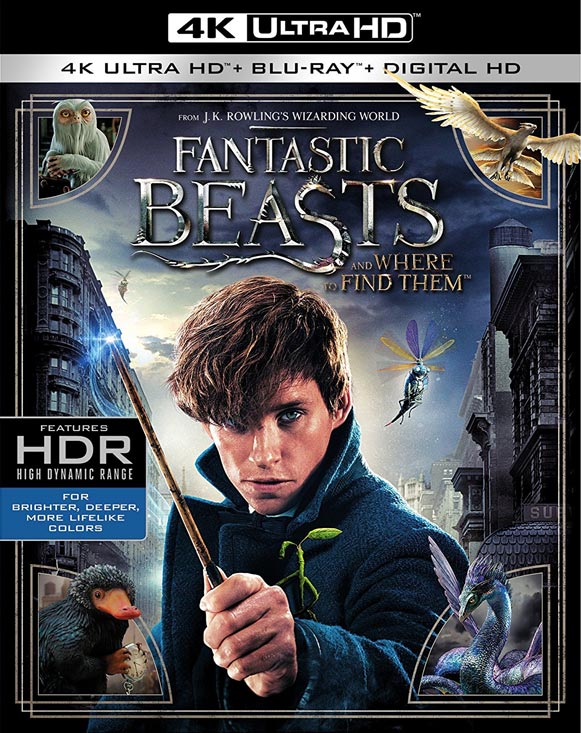