Forum List What's new Dark Style Change width
Log in Register
What's new Search
Menu
Log in
Register
Navigation
Install the app
More options
Dark Style
Close Menu
Posted on September 21, 2021 by Timothy E
You are using an out of date browser. It may not display this or other websites correctly.
You should upgrade or use an alternative browser.
A serviceable sequel that delivers on action. 3 Stars 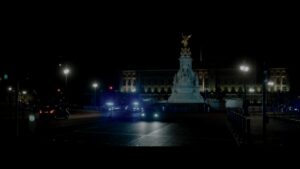 Vin Diesel returns as Dom Toretto with the rest of his crew return for another globe-trotting adventure in the latest chapter of The Fast and the Furious saga. 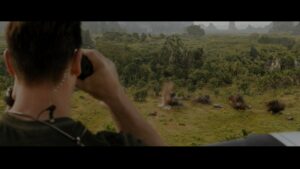 Dom Toretto(Vin Diesel) and his cohorts return in F9, the latest sequel in The Fast and the Furious film franchise.  Writer/director Justin Lin returns with a cast that also includes Michelle Rodriguez, Tyrese Gibson, Jordan Brewster, Chris “Ludacris” Bridges, Nathalie Emmanuel, Helen Mirren, Charlize Theron, and Kurt Russell.  In fact, nearly every major actor who has appeared in one of these sequels returns to this film, including Han, played by Sung Kang.  Han was killed in The Fast and the Furious: Tokyo Drift(2006), but has appeared in a number of the sequels since then, thanks to time-shifting of the chronological order of this film franchise.  Since F9 takes place later than any of the other films, an explanation is provided for Han’s return in this film that is no more implausible than anything else in this series of films.  Even the youngest members of the audience will know that this is fantasy, not reality, by the time that Roman and Tej blast into orbit to take out a rogue satellite in a Pontiac Fiero with a rocket mounted on its back.  (I am not kidding.)  How do they breathe in orbit?  No problem.  Both astronauts are wearing deep sea diving outfits fed by oxygen tanks.
Of course, you do not watch a Fast Saga film for reality and verisimilitude.  (If you look up verisimilitude in the dictionary, you will never find The Fast and the Furious listed under synonyms.)  You watch this series to see the same family of actors return once again to drive fast cars, trade barbs and punches, and shoot lots of guns.  F9 delivers on this promise in its nearly 2 ½ hour length which goes by faster than it seems, just like the Pontiac with a rocket mounted on its back.
Cars, aircraft, even submarines crash and explode without any threat to the mortality of its players in a Fast Saga film.  It takes me back to the days that I played with toy cars in the dirt, having them perform fantastic jumps and aerobatics with any substantial damage to the toys or their imaginary passengers after a crash.  This may be the best explanation for the success of this film series, since its unreality transplants us all back to a simpler time of childhood wonder when the only limits in the world were in the boundaries of our imagination. 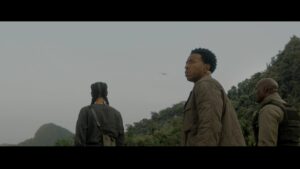 The charm of The Fast Saga is that it never takes itself too seriously.  At one point, Roman stops to question the fact that he seems to survive any vehicular obliteration without so much as a scratch.  In a discussion with Tej and Ramsey, Roman theorizes that they may be all invincible.  The discussion concludes by pulling back from the conclusion that they are invincible because they are figments of the imagination of screenwriter gods, since having Roman, the buffoon of the group, actually figure out the nature of their fictional reality would be the most unbelievable thing to happen in F9.
The MacGuffin this time around consists of the Ares device, which can hack into every computer system on Earth and allow its user to control the world.  Ares consists of more than one component which leads to a quest and a race to beat the villains.  John Cena joins the cast as Jakob Toretto, a previously unrevealed brother to Dom and Mia who is now a super spy and one of the villains seeking the Ares device, which pits brother Jakob against sister Mia and brother Dom.  A series of flashbacks in the film places Jakob’s conflict with his siblings in context with the death of their father.
Give the screenwriters of F9 credit for not taking things too seriously with Roman’s meta perception of his invincibility.  Cena is a nice introduction to the series as a Toretto sibling and one hopes that he will sign up for the inevitable sequels.  If the unrealistic and implausible elements of The Fast Saga do not sit well with you, it is possible that you are overthinking the plot more than is intended.  The Fast Saga of films is not for everyone, though, and you probably know already if this is the type of film that you will enjoy.  If so, then sit back and crank the volume up on your sound system as though it were a throttle, and appreciate the sound and fury of F9. 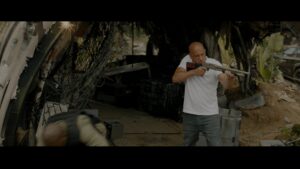 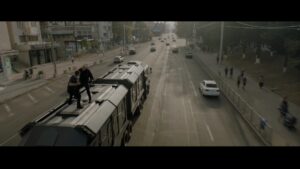 F9 appears on 4K UHD and Blu-ray disc in its original theatrical aspect ratio of 2.39:1.  Both presentations are seemingly flawless with exquisitely brilliant hues provided by HDR on the 4K disc.  These films are a seamless blend of practical effects and CGI which is extremely well served on disc.  Fine detail is superb with nice gradations of shadows and black levels.

English audio is Dolby Atmos on both discs.  The sound stage is used well with directional audio for a fully immersive experience.  There are dialogue scenes and there are action scenes, and rarely the twain shall meet, in the sense that essential dialogue and exposition are saved for quieter scenes with the subwoofer kicking in during the extensive action set pieces.  Your level of desired volume will depend upon the proximity and tolerance of your neighbors. 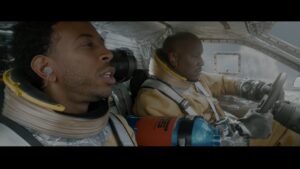 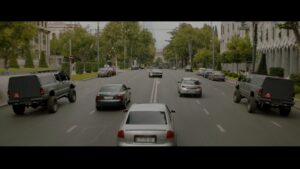 The special features on both discs include all of the following:
Gag reel(3:34):  Flubs and jokes by the cast during production.
F9: All In(45:23):  Cast and crew behind the scenes of production of this 10th film in the series.  This feature is broken down into 9 separate chapters which may be selected individually or with a “Play All” selection.
Practically Fast(7:52):  Featurette about stunts in the film created by CGI and practical effects.
Shifting Priorities(3:59):  This feature shows the evolutions of the characters since the release of the first film in 2001.
Justice for Han(3:37):  Actor Sung Kang and writer/director Justin Lin talk about the resurrection of Han, as do other cast members.
A Day On The Set With Justin Lin(10:00):  A day in the life of a director of a film in The Fast Saga.
John Cena: Supercar Superfan(4:36):  Actor John Cena demonstrates his love for muscle cars in this featurette.
Both cuts of the film also includes an optional feature length commentary by writer/director/producer Justin Lin.
Also included is a paper insert with validation code of digital copy of the film on the MoviesAnywhere app.

F9 is an entertaining, action-oriented film that may be enjoyed without cerebral demands.  The video and audio presentations on 4K disc and Blu-ray are top-notch, and the special features are more than adequate to satisfy demands of fans who want more content before the next sequel.  F9 may not be the best film of the franchise, but not the worst, either, and it provides what you might hope for if this is your kind of film. 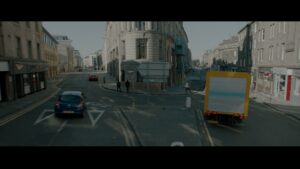 I hope they fix the authoring for other 4K discs that have alternate versions on the same disc. The Blu-ray does this correctly by offering you the choice after pressing "Play." The 4K disc plays the shorter theatrical cut by default, and the longer director's cut can only be accessed through the director's commentary in the special features section. The 4K disc should offer the same accessibility to the alternate cut as does the Blu-ray.

I somehow missed that they made yet another F&F flick. Did this even get a theatrical run? Checked out the trailer on youtube and I don't think I want to see this. Aside from everything looking overly digital and fake, the plausibility of the stunts is laughably poor. This is now bordering on cartoony (maybe it always was?) I've enjoyed most of these films to a point but I think it's time to bow out.

cineMANIAC said:
I somehow missed that they made yet another F&F flick. Did this even get a theatrical run? Checked out the trailer on youtube and I don't think I want to see this. Aside from everything looking overly digital and fake, the plausibility of the stunts is laughably poor. This is now bordering on cartoony (maybe it always was?) I've enjoyed most of these films to a point but I think it's time to bow out.
Click to expand...

Yep, biggest movie of the year so far worldwide* (released in theaters on 6/25):

*Actually second biggest behind the Chinese release, Hi, Mom ($822 million) though I'm not sure if that film is yet released anywhere outside China.
Last edited: Sep 22, 2021

Rented this last night on Blu-ray; one of the first, if not THE first, I missed in theaters. Me and the wife both thought this was "ehhhhh...." even being big fans of the franchise in general, going back to Rob Cohen's superior and spot-on original. I own the original on DVD (still looks amazing) and parts four, five, six and seven on Blu, and Fate of the Furious on UHD Blu.

I don't think this one is a buy.

Todd Erwin said:
I read that there is an issue with the Movies Anywhere code for this film when redeemed anywhere else but Movies Anywhere. Redeeming on MA will give you individual listings of the theatrical and director's cuts in 4K across most retailers, but if you redeem on Vudu, you will receive the theatrical in 4K and the director's cut in HD as a bonus feature.
Click to expand...

Unfortunately, I redeemed my MA code on Movies Anywhere site and the director's cut was not in 4K.

Edit: Via my ATV4K unit and using MA app on iTunes, the movie's does have two separate 4K listings there. Furthermore, the director's cut does play back in 4K on MA's site.

Via my ATV4K unit while using the Amazon app on iTunes, there are two separate 4K listings for theatrical and director's cut. However, the director's Cut doesn't play back in 4K.

In Canada, the code only redeems on Google movies... as the DC version only. Can't get the theatrical version that way.

Unfortunately, I redeemed my MA code on Movies Anywhere site and the director's cut was not in 4K.

Edit: Via my ATV4K unit and using MA app on iTunes, the movie's does have two separate 4K listings there. Furthermore, the director's cut does play back in 4K on MA's site.

Via my ATV4K unit while using the Amazon app on iTunes, there are two separate 4K listings for theatrical and director's cut. However, the director's Cut doesn't play back in 4K.

Sorry!
You must log in or register to reply here.