The Expendables was Sylvester Stallone’s attempt to recapture the spirit of the 1980s action movie, allowing many icons from those films to appear on-screen together for the first time. On that basis, the movie works, but the movie would have benefitted from a more accomplished director.

Note: This release contains the original theatrical edition only on both 4K UHD Blu-ray and Blu-ray.

Barney Ross (Sylvester Stallone) leads a group of mercenaries known as The Expendables, who are hired to overthrow a dictator, General Garza (David Zayas), who has partnered with a former CIA agent, James Munroe (Eric Roberts), to run a drug cartel from the fictional island of Vilena. Barney and his partner, Lee Christmas (Jason Statham), scout the island, only to find that their contact, Sandra (Giselle Itie), is Garza’s daughter and is eventually kidnapped by Munroe as Barney and Christmas escape from the island. Feeling responsible for her capture, Barney and his team, including martial artist Yin Yang (Jet Li), weapons specialist Hale Ceasar (Terry Crews), and demolitions expert Toll Road (Randy Couture), along with Christmas, return to the island and wage war against Garza and Munroe.

The Expendables is a fairly standard plot for a 1980s style action movie, throwing in a few complications along the way, such as the betrayal of ousted member Gunner Jensen (Dolph Lundgren). What bogs the film down is Stallone’s direction, who, at the age of 64 at the time of the movie’s release, may have bitten off more than he could chew by directing, starring, and co-writing the film. Stallone and his cast mention in the supplements that this was a grueling shoot (Stallone alone suffered many injuries), and that Stallone’s directing style of shooting whatever he can and hope it all fits together in the editing room make the final product uneven and at times confusing. I did like the chemistry between Stallone and Statham, and Stallone does get a lot of mileage from his ensemble of past and present action stars. As with most 1980s action movies, though, it’s the females that are poorly underwritten, with the role of Christmas’ girlfriend, Lacy (Charisma Carpenter) added nothing of much note to the storyline.

The Expendables was filmed in Super35 and completed as a 2k digital intermediate in 2010. As good as the original Blu-ray release was, it had issues with contrast and black levels that often appeared milky gray. This upscaled 2160p transfer with HDR resolves those issues, providing more natural and strong contrast and inky blacks that are, well, black. Fine detail is slightly improved, noticeable mostly in wrinkles, scars, and beard stubble on the actors. Colors, while not too overly saturated, do have a more natural gradation and consistency. Film grain is resolved nicely and is never obtrusive.

The disc includes a new Dolby Atmos track (with a Dolby TrueHD 7.1 core) that will knock your socks off, even when compared to the excellent DTYS-HD MA 7.1 track that was on the Blu-ray release. LFE presence is stronger without getting too boomy. The track also has a much wider soundstage and dynamic range, with more precise imaging of sounds in front, behind, and above the listener. Expect to hear gunshots and planes flying overhead and behind you, as well as explosions and anything else you would expect in an action film. Dialogue is clear and understandable throughout, never getting lost in the mix. This is definitely a demo-worthy track!

Unfortunately, Lionsgate has provided absolutely no special features whatsoever on the UHD disc (which is uncommon for the studio). All special features can be accessed on the included Blu-ray edition.

This is a worthy upgrade for those who already own the film on Blu-ray, with better contrast and black levels on the video and Dolby Atmos audio. There are no special features on the UHD disc, so if you are thinking of purchasing the 3-movie UHD set from Wal-Mart, you have been warned. 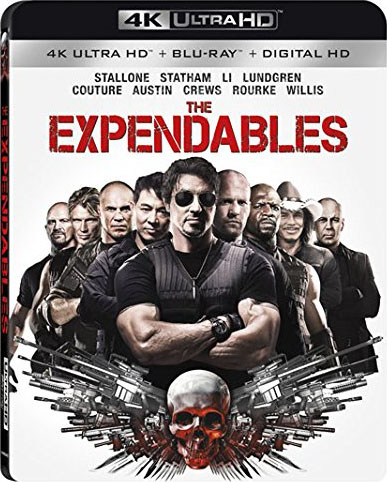