Posted on October 8, 2018 by t1g3r5fan
Infamous sequel to the classic horror film 3.5 Stars

Sometimes, you can have the best of intentions for a movie and it can still go horribly wrong; such is the case for Exorcist II: The Heretic. It not only endured a troubled production, but it had to live in the shadow of its enormously successful predecessor in terms of what audiences expected from a sequel. Understandably maligned in its time by both critics and audiences, the movie now arrives in a Collector’s Edition from Scream Factory for those to judge for themselves.

Four years have passed since the events in The Exorcist, and Regan MacNeil (Linda Blair) is trying to move on with her life. However, her path crosses with Father Philip Lamont (Richard Burton), a priest assigned by the Vatican to investigate the circumstances of the death of Father Merrin (Max von Sydow). Together, along with Regan’s psychiatrist (Louise Fletcher), they discover that Pazuzu hasn’t truly been vanquished and Regan is still at risk from the ancient demon. It’s a journey that goes from New York City to Africa and finally back to Washington D.C., where the old MacNeil House becomes the final battleground for Regan’s soul.

It’s hard to think of now, but Exorcist II: The Heretic actually had a lot going for it when it began production. Several members of the original cast (Linda Blair, Kitty Winn, Max von Sydow) were returning along with some new and distinguished talents (Richard Burton, Louise Fletcher, James Earl Jones) added to the cast. The script by William Goodhart was highly thought of by the cast when they signed on and director John Boorman was still a few years coming off of his breakthrough film, Deliverance (1972); then the trouble soon began to crop up. The script underwent no less than five revisions (on the part of Boorman and “creative associate” Rospo Pallenberg), cast and crew members were either sick (Boorman caught valley fever and was out of action for a month; Winn and Fletcher were dealing with gall bladder infections) or were consistently tardy to filming (Linda Blair), shooting locations initially chosen were unavailable or flat out denied were just some of the problems encountered during production. When it was released, the problems didn’t stop; just one day after the movie premiered, Boorman re-edited the film into a 110 minute version, and that’s the one most people saw in theaters. However, it was to no avail, because the movie had already received a reputation for being not just inferior to the first, but as one of the worst of all time. Despite all of this, the movie does have it fans – the most notable of them being Martin Scorsese.

While some of the criticism is indeed warranted, the movie’s got one thing going for it – it’s never dull. The main question of whether great good attracts great evil is clearly evident throughout, right from the shocking opening involving the death of a faith healer during an exorcism right up to the climax involving Father Lamont struggling with not only his faith, but with the evil doppleganger of Regan. The astonishing production design by Richard Macdonald and camerawork of the distinguished William A. Fraker lends a unique visual style that can be mystical – if you look at it the right way. Finally, Ennio Morricone’s score mixes eerie elements along with tribal and African styled chants; his “Regan’s Theme” can rank among some of the most beautiful and haunting works he’s done. All of this, plus a mixture of some scenes that are serious headscratchers or just enter flat out WTF territory (a tap dancing sequence intercut with the stoning of one of the characters ranks high on that scale in my book) make the movie interesting, to say the least.

The same varying quality can be applied to the performances. Linda Blair, reprising her role as Regan, has a bubbly and effervescent screen presence that does clash with the tone of the movie but it doesn’t make her any less sympathetic. Richard Burton, in one of his more flamboyant performances, makes for an intriguing Father Lamont; whether he took the part in order to secure financing for Equus (1977) – as he claimed in one interview – or did it for the money to help pay for his divorce from Elizabeth Taylor, it’s clear that this one of his lower moments as an actor but no less interesting either. As the psychiatrist Dr. Gene Tuskin, Louise Fletcher appears like she’s walking through much of the movie in a trance – quite a change from her compelling (and Oscar-winning) performance in One Flew Over the Cuckoo’s Nest (1975). Max von Sydow returns as Father Merrin, mostly appearing in flashback in what appears to be an extended cameo appearance. Kitty Winn has more screen time, but is mostly wasted in a thankless return as Sharon Spencer, now as Regan’s paid companion. James Earl Jones makes the most of his brief appearance as Kokumo as an adult – his scene appearing in a locust costume is another strange momemt in an already crazy film. In his final feature film appearance, Paul Henreid is basically a ‘guest star’ as the cardinal who assigns Father Lamont to investigate Father Merrin’s death. Other notable appearances include Ned Beatty as the plane pilot who takes Father Lamont deeper into Africa to find Kokumo, Rose Portillo in a memorable opening spot as the young healer possessed by Pazuzu, and an uncredited Dana Plato (of Diff’rent Strokes fame) as the autistic girl at the psychiatric institute who provides the film with, probably, the most memorably nuts moment.

Presented in its original 1:85:1 aspect ratio, the original 117 minute cut of the movie was taken from a brand new 2K scan of the original film elements. Grain is film like and sturdy, with strong, crushed blacks, even skin tones, fine details present and strong colors, with only slight variances during some scenes employing optical effects. Minimal instances of print damage, scratches, dirt, dust, and other artifacts. This presentation now bests the previous Warner Blu-ray as the best the film has looked on home video.

The original mono soundtrack is presented on a DTS-HD Master Audio track. Dialogue is clear throughout, with strong fidelity and ambiance to sound effects and Ennio Morricone’s score without being too overpowering. Again, an improvement over the Warner Blu-ray in terms of presentation on home video.

Alternate 102 minute International Cut – Although it’s listed on the second separate disc as the “original home video cut”, this is the International Cut of the movie. In addition to the reworked opening scenes, which are narrated by Richard Burton, this version also has some scenes trimmed, reordered, or have alternate takes used, with some music altered as well. Also, the ending is changed, which in turn alters the fate of Father Lamont from the original cut. This version is a little more coherent than the 117 minute version, but that’s just my opinion.

Commentary with director John Boorman – Featured on the first disc and newly recorded for this release, the director explains his involvement with the movie as well as some personal insights about the material. He does pause from time to time, but this is overall an entertaining track to listen to.

Commentary with Scott Michael Bosco – Also featured on the first disc, the special project consultant shares some information as well as his personal involvement with the movie. It’s probably the weaker of the three commentaries, but it’s not without some interesting facts; my favorite: I didn’t even know there were only a very small number of prints made of the original cut of the movie!

Commentary with Mike White – Featured on the International Cut of the movie, The Projection Booth Blog writer really delves deep into the troubled production of the movie in this track. It’s easily the most informative and insightful commentary of the three.

What Does She Remember? – An Interview with Linda Blair (19:16) – In this newly recorded interview, the actress shares some memories about the production as well as some feelings about it. Featured on the first disc.

An Interview with editor Tom Priestley (6:57) – In this brief, newly recorded interview, the film editor of the movie – who replaced the original editor John Merritt during production – shares his memories of working on the film. Also featured on the first disc.

Still Galleries – Five different still galleries of photos taken from, during and about the movie: there’s the black and white production stills (126 photos at 10:32), color stills (53 photos at 4:34), some stills taken from a scene deleted from the movie (4 photos at 26 seconds), behind the scenes stills (52 photos at 4:25), and the poster and lobby card stills (95 photos at 8:03). Some of these stills were provided by Brett Cameron and Scott Michael Bosco. All of this can be found on the second disc.

Exorcist II: The Heretic was, and still is, a polarizing movie in the movie franchise; most won’t think too highly of it while some may find some value in it – I tend to find myself in the latter camp. Scream Factory has done a great job of producing a mostly comprehensive Collector’s Edition of the movie, which will be bound to provoke new feeling of derision or praise, depending on how you view the material. If you’re one of those who find value in it, this edition is worth getting for the special features alone and can retire the old Warner Blu-ray because this is probably the best the film has looked on home video. 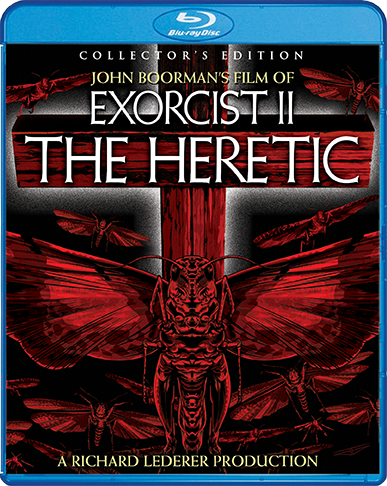