Director Ridley Scott tries his hand at retelling the story of Moses and the Hebrew’s Exodus from Egypt in Exodus: Gods and Kings. The end result is a 2 1/2 hour epic that is gorgeous to look at, particularly in UHD, but struggles in its storytelling and casting.

Exodus: Gods and Kings takes the familiar story of Moses, the Prince of Egypt, and how he helped lead the Hebrews, the slave labor to Pharaoh, leave Egypt and form the nation of Israel, but tries too hard to fill in the gaps and rethink the legend to make it palatable to modern, possibly non-religious audiences. His story is a major part of just about every monotheistic religion, and it is this familiarity of the main plot points and the screenplay’s freedoms with the conventions of that story that often work against each other, resulting in a film that has little heart or emotional connection with the audience. As the movie opens, Moses (Christian Bale) is a General in Pharaoh Seti I’s (John Turturro) army, second in command to Ramses II (Joel Edgerton), about to lay siege to the Hittites. Before the battle, the High Priestess (Indira Varma) prophesies that “A leader will be saved, and his savior will someday lead.” When Moses saves Ramses life during the battle, Ramses starts to become suspicious and jealous of Moses, particularly when Pharaoh shows more favoritism towards Moses. Moses, though, doesn’t believe in prophecies. That is, until he begins to learn who he really is, starting with a meeting with one of the Hebrew elders, Nun (Ben Kingsley), who tells him that he was born a Hebrew slave until he was given to Pharaoh’s daughter, Bithia (Hiam Abbass) and raised under Pharaoh’s roof as her own son. When Seti dies and Ramses takes control of Egypt, the truth finally comes out and Moses is exiled (another liberty taken in the source material). Moses finds his way to Midian, falls in love with Zapporah (Maria Valverde), and meets God in the form of a young boy named Malak (Isaac Andrews), but only after suffering a concussion during a mudslide down a mountain. Malak tells him to return to Egypt to see the suffering that his people are enduring and to help set them free. Moses arrives in Egypt as a revolutionary, trying to gather the Hebrews in an uprising that ultimately fails, until Malak steps in and tells Moses to step aside and see what God can do, thus bringing the ten plagues (through some impressive CGI) upon Egypt one after another without any interaction between Moses and Ramses and the infamous “Let my people go” until just before the final plague of the death of the first born. Ramses gives in after his son dies during the plague, leading to the big showdown during the parting of the Red Sea (which Ridley Scott depicts more as the prologue to a major tsunami wave than anything majestic as seen in Cecil B. DeMille’s Ten Commandments with Charlton Heston or DreamWorks Animation’s Prince of Egypt). The casting of Christian Bale as Moses was a bold choice that doesn’t quite pay off, especially with Bale’s inability to settle on an accent to help define his character, although he and Joel Edgerton do have some chemistry as the brothers at odds with each other. Sigourney Weaver’s role as Ramses’ mother Tuya and Ben Kingsley as Nun are reduced to nothing more than cameos, and Aaron Paul is almost unrecognizable as Joshua (another role not completely fleshed out).

As with most of the first wave of UHD Blu-ray releases, Exodus: Gods and Kings was completed in 2K for theatrical release, having been shot digitally with the RED Epic MX Dragon in 5K. Fox has upscaled the completed 2K image to 2160p, retaining the film’s original theatrical aspect ratio of 2.40:1, and then regraded using High Dynamic Range. Before I delve into my observations, it should be noted that I reviewed this disc on what is currently the only available UHD Blu-ray player on the market, the Samsung UBD-K8500, connecting the main HDMI output to an LG 65UF8500 (which unfortunately does not support high dynamic range or HDR10) and the secondary HDMI output to a Marantz SR5008 receiver for lossless audio decoding. That being said, the UHD is a vast improvement over the previous Blu-ray release (which my colleague Matt Hough gave a 5 out of 5 for video). Colors appear more natural and solid, without any banding or bleeding. As one would expect, detail also excels, particularly the fabrics and intricate jewelry worn by Pharaoh and the meticulous hieroglyphs on Moses’ sword and palace walls. Contrast was also improved with deeper blacks and an overall brighter picture without appearing washed out, although in some instances shadows are so well-defined that they obscure backgrounds.

The UHD Blu-ray contains the same DTS-HD Master Audio 7.1 track as the Blu-ray release. I lowered my score a half point because the film was released to theaters in Dolby Atmos, which was skipped over on both the Blu-ray and UHD editions in favor the DTS-HD MA 7.1 track.

Here’s a surprise – two of the bonus features have been ported over to the UHD disc.

Audio Commentary with Director Ridley Scott and Co-Screenwriter Jeffrey Caine: Scott and Caine were recorded on separate occasions, with Scott obviously focusing more on the production of the film and Caine on developing the screenplay and adapting the source material.

The Exodus Historical Guide: A subtitle option providing historical and Biblical background to the story as it unfolds on-screen.

Blu-ray copy: The movie in 1080p, plus all of the special features included on the single-disc BD edition (commentary, Historical Guide, and Deleted Scenes in 2D and 3D).

Exodus: Gods and Kings is a beautiful film to watch, but hard to connect to on a story or character basis. This UHD is another top performer in the video department, but the Blu-ray still looks outstanding. For those with UHD sets with 1080p 3D capability, it’s likely a tough choice between 3D Blu-ray or 2D UHD. 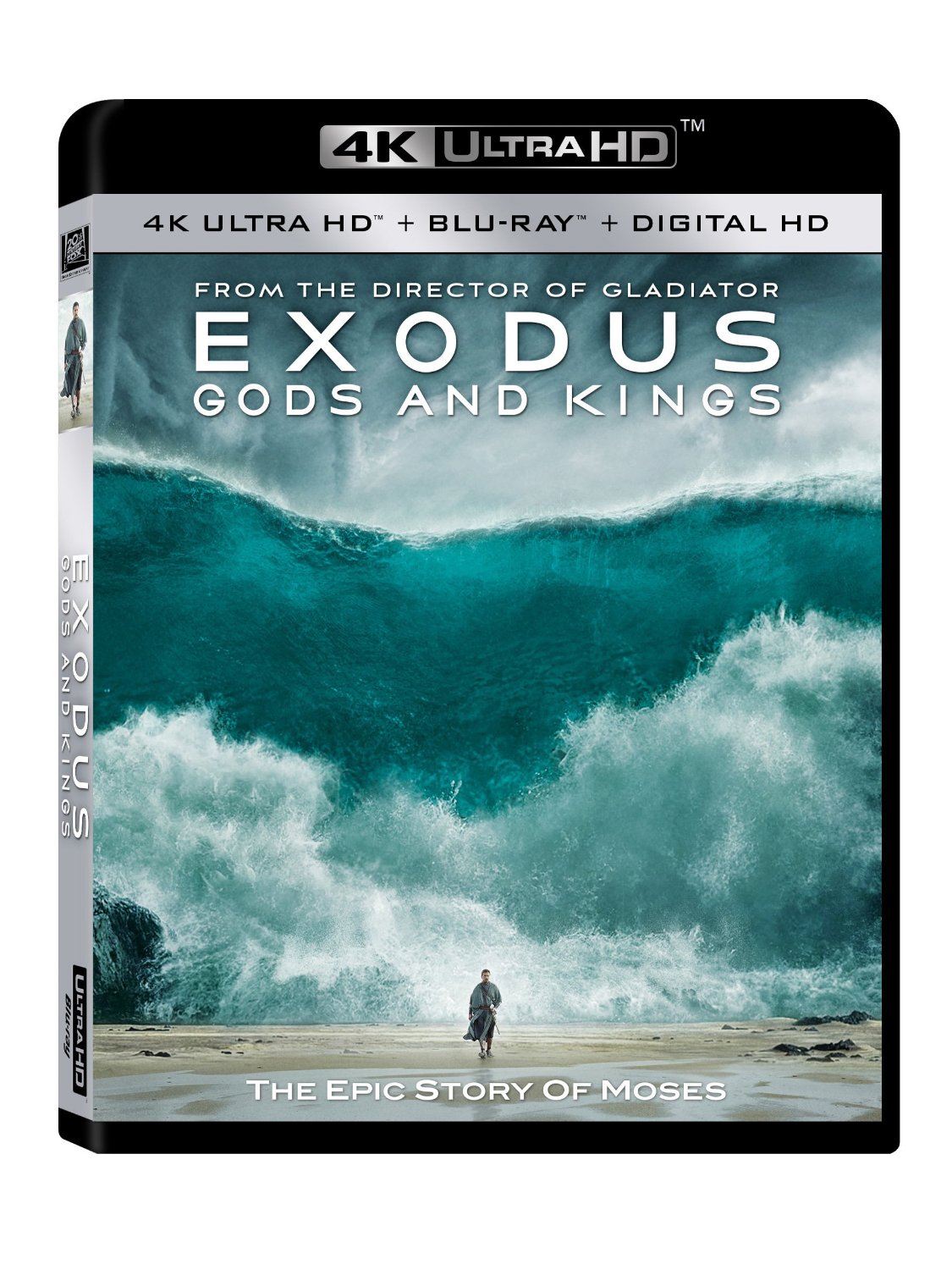