Forum List What's new Dark Style Change width
Log in Register
What's new Search
Menu
Log in
Register
Navigation
Install the app
More options
Dark Style
Close Menu
Posted on June 9, 2017 by Todd Erwin
You are using an out of date browser. It may not display this or other websites correctly.
You should upgrade or use an alternative browser.
Thinking Man's Sci-Fi 4.5 Stars

Perhaps one of the best independently made science fiction films in recent years, Ex Machina is also an intriguing game between three characters, trying to determine if a humanoid robot with artificial intelligence is sentient. The film won an Oscar for Best Visual Effects in 2015.

Caleb (Domhnall Gleeson), a young programmer, gets more than he bargained for when he wins an office pool to spend a week in seclusion with Nathan (Oscar Isaac), the CEO of his employer, Blue Book. Nathan has created a humanoid robot with artificial intelligence, named Ava (Alicia Vikander), and he wants Caleb to interview her and conduct a Turing test to determine if she is capable of thought and consciousness; in other words, sentient. Nathan’s plans, however, go much deeper than that, and some of the secrets Caleb will discover by the end of the week are just downright creepy.

The film marked the directing debut of Alex Garland, who also penned the screenplay. Garland is a talented writer, having written movies like Dredd, Sunshine, and 28 Days Later. Many critics have compared his directing style in this film to that of a young Stanley Kubrick, and they are not that far off. Ex Machina is a very character driven story, and Garland likes to use long takes, often with no dialogue, and cut away to dream-like vistas and flash backs and forwards. Oscar Isaac, who is almost unrecognizable as Nathan with his shaved head and scraggly beard when compared to what is his best-known role as hot-shot pilot Poe Dameron in the current Star Wars trilogy, is superb as the megalomaniac control freak that seems to be enjoying this game of cat and mouse a bit too much. Domhnall Gleeson is very convincing as a young and very intelligent American who was orphaned as a teenager but still somewhat innocent to the ways of corporate America. The real standout, though, is (future Lara Croft) Alicia Vikander as Ava, who brings a complete innocence and childlike wonder to her role, which really helps to sell her as a newly developed intelligence. The effects, which consist mostly of making Ava’s structure transparent with wires and glowing electrodes inside, are virtually seamless, and you can clearly understand why this little low-budget import took home the Oscar for Best Visual Effects in 2015. It’s kind of a pity that the studio that produced the film, Universal, did not have enough faith to release the film in the US, and instead sold the distribution rights to A24 and Lionsgate.

Ex Machina was completed as a 4K digital intermediate, and as excellent as the previous Blu-ray release was, this new UHD release is a noticeable improvement. The 2160p transfer with HDR10 provides a dramatic increase in fine detail, from the facial recognition patterns on Caleb’s face in the opening sequence to the textures on Ava’s “skin” and electronics and many of the wide vistas surrounding Nathan’s compound. Colors are more natural, with more realistic gradations. The power breach sequences, which are bathed in red, are also improved, with an added sense of depth and deep reds that don’t bloom. Contrast is also stronger, with deeper blacks that retain shadow detail and bright whites that don’t clip and still retain detail as well. This is an excellent transfer, once again, from Lionsgate.

Ex Machina contains the same DTS-X track that was included on the previous Bly-ray release, which will downgrade to DTS-HD Master Audio 7.1 for those, like myself, that are not equipped with the spatial format. For a very dialogue-driven soundtrack, there are some wonderful moments where this track shines, such as the helicopter flyovers at the beginning and end of the film, the use of musical tones throughout, etc., which are often panned around the listening space very effectively. Dialogue is clear and understandable, never getting lost in the mix. LFE is also very strong, providing some extra oomph to the track where needed, but never sounding boomy. The original 5.1 theatrical mix has been included in DTS-HD MA, as well as a DTS Headphone:X stereo track.

Digital HD Copy: An insert contains a code to redeem a digital copy from UltraViolet Partners.

Ex Machina is another wonderful catalog title from Lionsgate that has been released in UHD, with noticeably improved video.

I have this 4K disc in hand but have not watched it. Soon...Soon.

'member that one time Poe Dameron and General Hux hung out in a secluded house? Pepperidge Farm 'members...

This is en route to me, I can't wait to watch it once it arrives. Surprisingly hard to get a hold of (local stores didn't have copies and Amazon was sold out for a bit).

I 'memba! When Poe Dameron and General Hux hung out with Lara Croft? 'Memba that?

I also 'member when Kylo, Poe and Sexy Back sang a song. 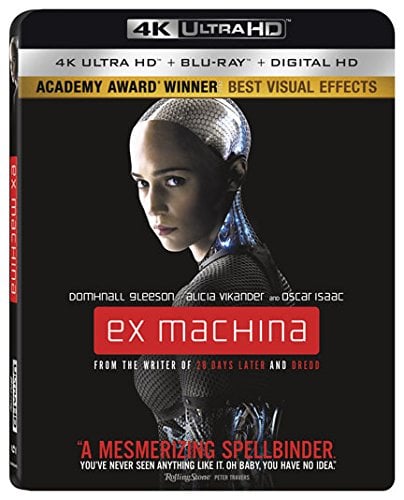