Genuinely terrifying throughout its run and constantly surprising, too, CBS’ Evil proves itself one of the most recent television season’s most wonderful surprises.

Among the best and certainly most unusual new series of the 2019-2020 television season was CBS’ Evil. Produced by Robert and Michelle King, who brought originality and fervor to the legal procedural with The Good Wife, the series focuses its attention on the nature of evil all around us in alternately funny, scary, and most importantly thought-provoking scenarios that always keep you guessing: is evil supernatural at its core or is there a rational basis for its presence? The season’s thirteen episodes cleverly offer arguments on both sides of the coin dazzling the viewer with its creepy inventiveness that puts something like the latest reboot of The Twilight Zone to shame.

Tasked by the Catholic diocese in New York to investigate accounts of possessions and miracles, priest-in-training David Acosta (Mike Colter) recruits agnostic forensic psychologist Kristen Bouchard (Katja Herbers) and atheist technology expert Ben Shakir (Aasif Mandvi) to team with him to give each investigation both a spiritual and pragmatic interpretation. Among other cases, they explore a couple of demonic possessions, a resurrection miracle, a demonic child, a self-proclaimed prophet, a ghost, an instance of stuck song syndrome, and a demonic pregnancy. What they find in these cases is both startling and oftentimes violent with quite a bit of gore for a network series shown visually. In most instances, each side of the explanation for these events is offered allowing those of either persuasion to feel satisfied with their findings and conclusions making the series one of the few that doesn’t offer pat answers to the conundrums it has created. And even more startling is the full circle surprise the writers spring on the audience in the season finale which is an eye-opener, one of several that are sprinkled throughout the thirteen episodes. The question of the devil being a reality or merely a symbol of evil is eventually attended to late in the season.

But the series has another component: Kristen is a working mother with four pre-teen daughters (Brooklyn Shuck, Skylar Gray, Maddy Crocco, Dalya Knapp) who during the season manage to invite into the house a number of unsettling forces that give the frazzled Kristen (who’s already being plagued almost nightly by a demonic night terror who calls himself “George” – Marti Matulis) plenty to worry about on the domestic front, especially once she finds herself locked in head-to-head combat with a threatening rival forensic psychologist Leland Townsend (Michael Emerson) who spends the season throwing a series of roadblocks that frustrate and thwart Kristen. Primary among those is his wooing and winning of Kristen’s divorced mother Sheryl (Christine Lahti), a grandmother who refuses to give up her “youth” in manner and dress and who is so besotted with Leland that she does his bidding even when the well-being of her daughter and granddaughters is put at risk. With Kristen’s husband Andy (Patrick Brammall) away for much of the season as a mountain climbing guide, the young mother finds herself juggling many balls in the air throughout much of the season.

Mike Colter is wonderful casting as the “apprentice” priest: physically imposing but spiritually unsteady as he occasionally uses hallucinogens to communicate with God. Ironically, despite that massive physique, Colter’s David Acosta takes a fair amount of punishment during the season especially in a succession of three late season episodes where he’s victimized quite severely to the point of near death. Katja Herbers can alternate between spunky kitten and pouncing tigress with equal ease. Aasif Mandvi as Ben gets the fewest opportunities among the three leads, but he can often bring a wry point of view to some of the more serious phenomena they are investigating. No one outdoes Michael Emerson for creepy insidiousness; his Leland Townsend ranks right alongside his other great villains. While she’s behaving recklessly in her delirium at late-in-life love, Christine Lahti offers her usual professionalism even if the writers do let her down in having her fall so foolishly and nonsensically into one bad decision after another without giving her daughter’s prior experiences and the concrete evidence she has even the slightest thought. Robert and Michelle King readily admit that allowing Kristen’s four daughters to continually talk at the same time was their idea, one they find hilarious, but for a viewer, it’s a motif whose welcome is worn out as early as the second episode.

Here are the thirteen episodes contained on three DVDs in the season one set:

11 – Room 320 (the most genuinely suspenseful episode of the season)

The series’ widescreen aspect ratio of 1.78:1 is faithfully delivered in these standard definition transfers which have been anamorphically enhanced for widescreen televisions. Despite the lack of high definition, the images are mostly solid with very few visual artifacts to plague them (only some slight moiré was visible). Color is very bold when it needs to be and is otherwise nicely controlled and consistent. Black levels are excellent, and edge enhancement has been minimized. Each episode has been divided into 6 chapters.

The disc offers both network quality Dolby Digital 5.1 and 2.0 stereo surround audio tracks. Both are full and enveloping with excellent placement of the dialogue in the center channel and the music and sound effects cannily placed in the various surround channels. The LFE channel can be quite forceful in some of the more intense moments during the season.

Deleted/Extended Scenes: thirteen scenes are offered spread over the three DVDs, each tied to the episode from which it was extracted.

Evil: Season One: Genesis (20:16): creators/producers Robert and Michelle King discuss their genesis for the series and their various ideas about casting the leading roles. Stars Mike Colter, Katja Herbers, Aasif Mandvi, and Michael Emerson discuss their individual roles and the journeys they undertake during the season (the interviews were shot during production of the show’s final episode).

Does Evil Exist? (3:52): Robert and Michelle King, Mike Colter, Katja Herbers, Aasif Mandvi, and Michael Emerson each discuss their ideas about good and evil and how they find it incarnated in the real world.

Genuinely terrifying throughout its run and constantly surprising, too, CBS’ Evil proves itself one of the recent television season’s most wonderful surprises. While a Blu-ray release of the season’s thirteen episodes would have been preferable to this DVD release, a good upconverting player will provide a passable make-do for fans of the show or its illustrious cast. Highly recommended! 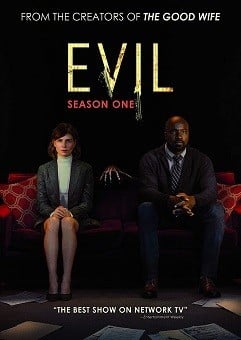