Richard Linklater, writer/director of 2014’s critical darling, Boyhood, returns with Everybody Wants Some!!, billed as a spiritual successor to his defining 1993 film, Dazed and Confused, and the result is an easygoing comedy and two hours that you’ll enjoy spending with a group of (mostly) likeable, funny and fun guys living in the moment.

“I’m too philosophical for this sh#t!”

In the summer of 1980, freshman pitcher, Jake (Blake Jenner) arrives in town the weekend before college starts up and meets up with his spirited, boisterous teammates at the house they will all share. He is introduced to an eclectic bunch of playful young men, a mix of the mellow and the assertive; the distracted and the engaged. Over the course of the weekend this ‘team’ will crash parties, disco dance, infiltrate a country bar, and enjoy an assortment of harmless, timeless antics before school officially begins.

Everybody Wants Some!! is a playful affair, reliant upon familiar conversations amongst ‘buddies’ delivered by a wonderfully energized and engaged cast who fill out a collection of familiar characters without ever having them fall into the ‘caricature’ trap. Ostensibly we follow freshman Jake as he arrives and navigates his way through meeting new people and situations – including falling for Beverly, a beautiful redhead (played by the lovely Zoey Deutch). But director Richard Linkater’s latest exploration of people is welcomingly broader and less obvious than this narrative. This is an ensemble piece cast with pleasing precision that effortlessly takes us back to 1980 and clear-minded sense of uninhibited fun.

The film sports a large cast and each character is given time to become a recognizable person – reminding us of someone we know, or standing out enough amongst his peers to stay with you. Blake Jenner is Jake Bradford, the wide-eyed freshman that can just about handle himself with his new and older teammates. He’s a likeable young man and pulls off both the innocence and the wildness of college freedom. Tyler Hochlin’s uptight, skilled batsman Glen McReynold’s isn’t so much likeable as understandable. He’s competitive and ornery, but you understand who he is.  Ryan Guzman’s Kenny Roper is playful and dependable, while Will Brittain’s southern simpleton, Billy “Beuter” Autrey, is oddly charming as the butt of his teammate’s collective jokes. Temple Baker plays Tyron Plummer, the most ‘jock’-like of the group, and Austin Amelio’s stringy, bold and betting-prone Nesbit is disposed to his own outbursts of over-confidence. Tanner Kalina’s Alex Brumley is the gullible, suggestable member of the crew. Forrest Vickery’s “Coma” is a well mustached, assured, member. Juston Street’s “Jay” is the awkward, tightly wound transfer to the team, and unintentional comic dart-board. Finally, Quinton Johnson’s Dale Douglas is grounded, equally fun-loving, but wise beyond his years. And perhaps the most compelling of this collection of characters is Glen Powell’s Finnegan (“Finn”) – a near-perfect specimen; an intelligent and witty crackerjack with the ladies and unofficial leader of the team.

Unlike Linklater’s most recent masterwork, Boyhood, Everybody Wants Some is a considerably less ambitious affair, and, frankly, likely has a more outwardly limited appeal. While the subject may seem crafted for those who understand the easy relationships established by a group of young men inhabiting the same space and time for a common cause (in this case, a successful college baseball team), Linklater’s writing and the performances by a very good collection of actors broaden that appeal. Personally, I found parallels of experience despite not playing on sports teams or being surrounded by sun-soaked young men in perpetual pursuit of alcohol and ladies. The parallels – where the film resonates most personally – is from all the snappy banter, playful ribbing, and lighthearted shenanigans this collection of boys get into with each other. And it is from examining that rare moment in our lives where time seems to stand still; where responsibility is off on the horizon, and for a brief time all that there is in life is the fun and momentary abandon where we can just ‘be’.

It is in that undercurrent – in a film largely absent of a narrative thrust (outside of tenuously following a newbie arriving, finding his ground, and falling for a girl) – where Everybody Wants Some!! is at its most potent. And much like Boyhood, Everybody Wants Some!! isn’t really about a beginning, middle and end. It isn’t about plot, it is about creating and examining moments in time. There’s a transient quality to the film, meandering through the weekend before school starts filled with the cumulative effect of little moments – flipping through an LP collection, overdoing it with cologne, stepping up with one of the guys gets in a scuffle. These moments will ring true in some way to many.

Paramount brings Everybody Wants Some!! home in color-rich, warm, pleasing 1080p HD image on Blu-ray, featuring excellent detail, fine contrast, and natural skin-tones. Shot digitally (with the Arri Alexa), there’s crispness to the image that belies the analog memories many may have of the era (that perhaps shooting on film would have more obviously complimented), but the advantage of digital here is the effortless transportation of us, the viewer, back to the reality of that time – and that works nicely for what writer/director Richard Linklater seems to work to achieve.

One might expect a relatively low-key exercising of the English DTS-HD Master Audio that leads the audio options for a Linklater film. But the frequent use of music from 1980 – that ranges from classic rock and roll, early rap, and the seemingly timeless (read: unchanging) country music – gives Everybody Wants Some!! more than a few occasions to stretch its legs a little amongst the dialogue-drive scenes. It is still, on average, a low-key audio affair but suitable to the material and clean and clear all the way.

A lite collection of special features, none of which peel back the layers of the film in any meaningful way – and are more like snacks or a few ways to continue having a light, fun time with the movie. The most substantive feature, at a little over 25 minutes, is the “More Stuff That’s Not in the Movie,” a collection of outtakes and footage from the set. The rest of the special features are snippets running 5 or so minutes each looking at the cast’s skills videos (audition tapes showing off their baseball skills), preparing for their roles, and writer/director Linklater’s encyclopedic knowledge of the era.

Everybody Wants Some!! More Stuff That’s Not in the Movie

Ultraviolet Digital Version of the Film

Everybody Wants Some!! delights in the cast and the distinct, flawed, and a recognizable group of characters enjoying the endless weekend before college starts. These young men are characters plucked from Linklater’s memories of people he knew (with the exception of Finnegan, whom Linklater intended to be that perfect person most think of when embellishing stories of they we were like “Back in the day”,), and they are funny, likeable, interesting, and reminiscent of people many of us likely knew… or perhaps know still. 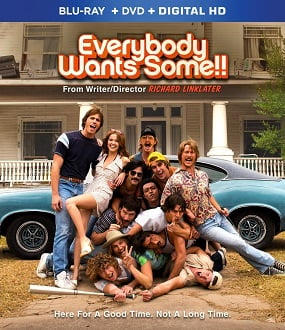