Everest is an unexpectedly strong mountain movie from director Baltasar Kormakur (2 Guns), covering the true story of the events that happened at Mount Everest in 1996.   There are some strong performances here, including Josh Brolin and the always-reliable Jake Gyllenhaal, but the real star of this movie is the mountain itself. Shot in three different locations (including the lower parts of the real Everest), the movie firmly and viscerally places the viewer as close to a real high altitude climb as anyone would ever want to be. The effect is accomplished through the strong work of both picture and sound. Everest is offered in high definition 3D, which repeatedly immerses the viewer in snow and frozen air. The sound mix is in Dolby Atmos (which will downconvert to 7.1 if you don’t have that capability) and is just as immersive as the 3D image.   This is a really interesting movie to experience, just on the technical level. The fact that it actually tells a good story as well is an unexpected and welcome boon. If you have not seen this movie, or if you’ve just seen the trailers (which really just set you up for some kind of snowy action movie), I am happy to Recommend this for purchase.   This is a demo-quality disc, and even if you just watch it in 2D, you’ll still get a solid experience from the sound mix alone.

SPOILERS: The story being played out here is almost completely built from true events that happened on Everest in 1996, as has been seen in many earlier books and films, including Into Thin Air.   This is one of the more memorably foolish situations to happen in the last 30 years, and the strength of the movie is that Baltasar Kormakur repeatedly shows how things could have been resolved without the tragedy that happened instead. The problem was started by having a large group of amateur mountain climbers all trying to reach the summit of Mount Everest at the same time, on a single day when the weather conditions would permit them to get to the top.   Given the altitude of the peak, such a climb must be handled very quickly and efficiently – something rendered impossible by the number of people trying to make it and made worse by major bottlenecks along the way (climbing lines were not restored in a crucial area right below the peak, thus delaying everyone by hours into the danger zone). The primary hero of the story, Rob Hall (Jason Clarke) was the group’s expedition leader, a man who specialized in bringing amateurs up to the summit, and he clearly knew better than the way he conducted things on the fateful day. For this movie’s purposes, Hall is shown knowingly allowing an amateur climber (played well by John Hawkes) already having serious problems to get to the peak way after the time he should have been on the way back down. This is compounded by a major miscommunication with climber Beck Weathers (Josh Brolin) that results in Weathers thinking he’s supposed to wait near the summit rather than go back down the mountain.

MORE SPOILERS: Adding injury to the situation, as happened in real life in 1996, is the massive storm system that moves in and blankets the area before several of the climbers can get out of the danger zone. The tragic result was that groups of climbers were cut off from each other and 8 people were killed on the mountain, including both of the expedition leaders.   There was one unexpected twist, however – Weathers actually survived nearly being frozen on the mountain and somehow walked back down. This would be an unbelievable plot point if it weren’t actually true. (The real Weathers lost his arms and nose to the cold, but is still alive today to tell the tale.)

YES, MORE SPOILERS: In telling the story of what happened on the mountain, the movie actually, thankfully, takes its time to lay out the details.   Over an hour is spent developing the characters and discussing the various dangers before the real trouble starts.   During that time, the home viewer is given a firsthand experience of making the initial climb to the lower altitudes, helped greatly by the immersive 3D and the 7.1 mix.   Once the climbers get into serious trouble, the movie alternates between wild moments of dealing with a harrowing snowstorm and quieter interludes where the seriousness of the climbers’ predicament becomes clear. (It’s surprising how much the movie is able to dramatize conversations over 2-way radios in this manner.) By the time the movie approaches the 2 hour mark, the viewer really feels like they’ve spent a couple of days on Mount Everest, under the worst conditions possible.

FINAL SPOILERS:   Not everything in the movie completely works. Robin Wright is frankly wasted in a side story about Weathers’ wife back home, and some of the character beats feel perfunctory along the way.   But the overall thrust of the movie is strong enough to withstand these issues. The movie is billed as an adventure thriller, but I think of it more as an adventure drama, with some thrilling elements thrown into the mix.

The 3D Blu-ray of Everest has been available to home theater viewers since January 19th. I note that the movie is actually a conversion rather than native 3D, but it’s been handled extremely well, and to be fair, it would not have been realistic to lug 3D cameras up to high altitudes in Nepal and Italy, especially in heavy snow conditions.  The packaging also includes Blu-ray and SD DVD editions of the movie, with all three discs including varying amounts of special features. Instructions for downloading a digital copy of each movie are included on an insert in the packaging.

Everest is presented in a 3D 1080p MVC transfer (avg 20 mbps on the left, 12 mbps on the right – with the right channel rising in bitrate as more dimensionality is presented).   This is a solid 3D presentation, using the natural topography of the area for separation at some times, and using foreground falling snow at other times. There are multiple diorama opportunities that the conversion uses at every turn, essentially providing a look into a world inside the window.

Not to be outclassed, the 2D Blu-ray (AVC transfer averaging 34 mbps) also looks terrific. I’ve noted that the movie was actually shot in three different locations for Everest: the actual Nepal location for the lower altitude areas, a snowy mountain range in Italy for the mid-altitude areas, and then greenscreen stage work for the peak areas. It is a tribute to the work of all involved that these areas all blend together fairly well, and the CGI doesn’t announce itself.

Everest is presented for non-Atmos home theaters in an English DTS-HD Master Audio 7.1 mix (avg 4.3 mbps, going up to 7.5 mbps in the big scenes), along with English and French DTS 5.1 mixes and an English DVS 2.0 mix. This is a heck of a sound mix, throwing wind and other atmospherics into all of the channels and applying the subwoofer at crucial points for good measure.   The 7.1 mix is a downconversion of the Dolby Atmos mix that better-equipped viewers will be able to enjoy, but it’s plenty solid on its own terms as well.

Feature Commentary with Director Baltasar Kormakur (AVAILABLE ON BLU-RAY AND ON DVD) – This is a packed commentary by Kormakur, who goes into great detail about where various scenes were shot, how they were accomplished and how the scenes reflect what actually happened during the real events.   Kormakur discusses the lengths to which he and his crew went to present the situation as realistically as they could – including casting an actual helicopter pilot who performed some heroics at the time.

Race to the Summit: The Making of Everest (ON 3D & 2D BLU-RAYS AND ON DVD) (10:59, 1080p AVC) – This eleven minute featurette is actually pretty comprehensive, going over the broad strokes about how the movie was put together.   The usual talking heads sound bites are present, but the featurette does give a solid overview.

Learning to Climb: The Actors’ Journey (EXCLUSIVE TO BLU-RAY) (4:42, 1080p) – This shorter featurette deals with the training and hardships the actors needed to undergo in order to deal with the real environments where they were shooting.   Some of the cast mention this having been a fairly difficult shoot, particularly when filming in extremely cold weather and in the middle of a blizzard.

A Mountain of Work: Recreating Everest  (EXCLUSIVE TO BLU-RAY) (5:13, 1080p) – This featurette shows the three distinct areas where the movie was primarily made, including the Nepal shoot at the real mountain, and some bitterly cold moments in Italy for the middle altitudes. The highest altitudes were shot on a stage in London, given that it would have been impossible to actually film anything at the real peak.

Aspiring to Authenticity: The Real Story (AVAILABLE ON BLU-RAY AND ON DVD) (6:47, 1080p) – This featurette gets into the real events that the movie portrays, including interviews with the survivors.   Beck Weathers offers his own perspective on what happened to him and how the experience changed him.

DVD Copy – The DVD edition is also included in the packaging, holding the movie in anamorphic widescreen and using a Dolby Digital 5.1 sound mix (@448 kbps).   The commentary and two of the featurettes are included as bonuses: Race to the Summit and Aspiring to Authenticity.

Everest is a surprisingly strong movie, and one that is definitely worth even a casual viewer’s time. The story, built from the true events at Mount Everest in 1996, is well-constructed, but the true draw here is the immersive 3D picture and sound. As someone who had serious issues with Baltasar Kormakur’s Contraband a few years back, I’m delighted to see him put together a package as good as this.  For both the technical strengths, and for the quality of the movie itself, this Blu-ray is Recommended for purchase.

Gee, only 4.0 for Mt Everest ?. Pickey. I was trying to put a smiley here but the menu
didn't show up. Software growing pains I guess?

And you're right that the software has been giving me fits. I'm still learning all the stuff I need to do to post.
Last edited: Feb 19, 2016

Click on the smiley in the toolbar and it will show you all the smilies, or you can type a colon and end parentheses to create one : +) = 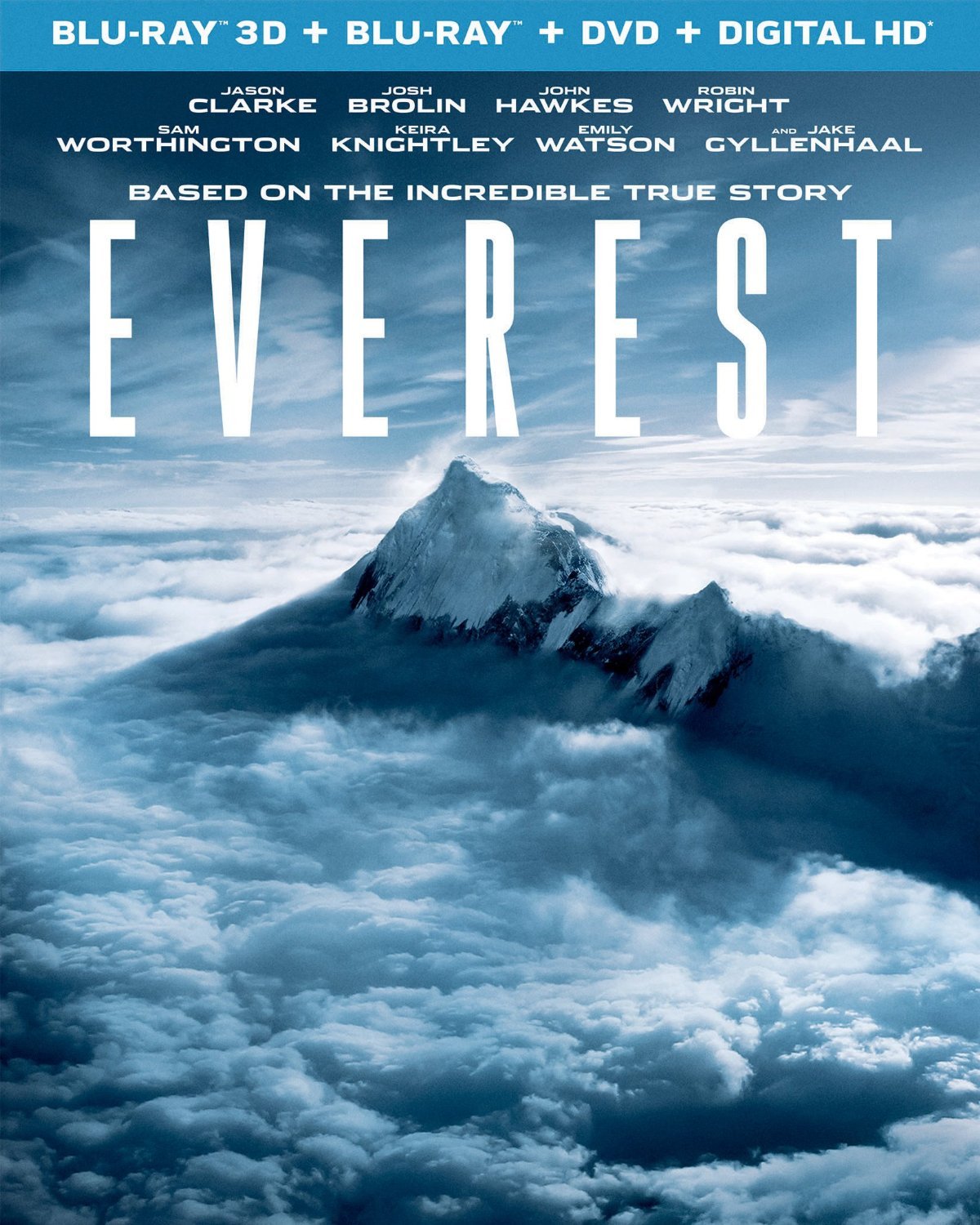