Forum List What's new Dark Style Change width
Log in Register
What's new Search
Menu
Log in
Register
Navigation
Install the app
More options
Dark Style
Close Menu
Posted on May 25, 2016 by Matt Hough
You are using an out of date browser. It may not display this or other websites correctly.
You should upgrade or use an alternative browser.
Typical Nicholas Roeg drama is visually arresting and narratively frustrating 3.5 Stars

It won’t be everyone’s cup of tea, but Nicholas Roeg’s Eureka offers up an unusual saga of too much, too soon combined with his patented arresting visual motifs and a tone of unsteady melancholy.

One thing you can always be sure of going into a Nicolas Roeg movie: it’s not going to be remotely like any other director’s work. Roeg’s films always seem off-kilter a bit, visually unique, and often challenging intellectually, but they’re rarely easy to like, and that’s certainly true with his 1983 opus Eureka. With a handful of unlikable main characters and a narrative that sometimes seems at cross purposes with itself, Eureka ends up being mostly an uneven viewing experience, but for those looking for something somewhat off the beaten path, it’s certainly worth investigating.

Loner gold prospector Jack McCann (Gene Hackman) with the aid of a psychic madam (Helena Kallianiotes) manages to uncover a tremendously lucrative gold strike in the Yukon in 1925 that makes him among the world’s wealthiest men. Twenty years later, Jack is basking in his leisurely life in the Bahamas, but he’s not happy. He knows he’ll never be able to recapture the feeling of that immense discovery, and the other aspects of his life: a drunken wife (Jane Lapotaire), a recalcitrant daughter (Theresa Russell) who revels in her lusty marriage to ne’er-do-well Claude Maillot Van Horn (Rutger Hauer), and a Miami mobster (Joe Pesci) turning up the heat to purchase McCann’s Bahamas property for a casino give him a feeling of being under siege and helpless in solving any of his problems.

The screenplay by Paul Mayersberg based on a true life story captured in the book by Marshall Houts finds itself split between the story of the unhappy, disillusioned Jack McCann and the events in the life of his spirited if somewhat misguided and libidinous daughter Tracy. With its focus divided between two rather equally disagreeable characters, the narrative never really seems secure in the story it’s telling, but director Nicolas Roeg doesn’t let that stop him from staging and shooting some really arresting sequences: the almost fairy-tale like discovery of the gold cavern, a too-long voodoo ritual, and a disturbingly brutal murder that involves head battering and eventual beheading, torching, and tar and feathering. After that, the film spends much of its remaining running time on a trial sequence that’s a mix of the tempting and the tedious: tempting because of some of the personalities involved in the proceedings and tedious because we know the accused didn’t do it but are not shown exactly who did, neither the writer nor the director interested in creating and solving a murder mystery. Elsewhere, Roeg indulges in one of his most signature motifs: linking objects, people, even scenes together in rapid cuts that disregard continuity and create that unbalanced, offbeat texture to the film which with the right subject matter (Don’t Look Now, The Man Who Fell to Earth) can capture and hold the attention grippingly but in lesser cases (as here) make for an ultimately unsatisfactory viewing experience.

Gene Hackman does what he can with the enigmatic prospector, a loner by nature and mistrustful later on of even those closest to him. Theresa Russell has a field day with Tracy, sexually adventurous (a sequence where she slithers over her husband fore and aft is quite something) and determined to live life on her own terms while Rutger Hauer offers an alluring possible gigolo (definitely a philanderer but where his love truly lies remains one of the film’s many paradoxes). Ed Lauter plays the underwritten character of McCann’s friend and partner Charles Perkins with spirited frustration, and Joe Pesci serves up another of his usual Mafioso thugs with few if any nuances. Mickey Rourke is more appealing as the mobsters’ consigliere, but Jane Lapotaire’s drunken, unsatisfied wife is a rather stock characterization.

The film has been framed at 1.85:1 and is presented in 1080p resolution using the AVC codec. Sharpness is usually good to very good though there are occasional problems with focus pulling leading to softer than expected shots. Color control has no problems with saturation levels, but occasionally skin tones go way too rosy. Contrast has been equitably applied toward producing the best possible image. Black levels are good but not great. There are dust specks here and there throughout (one heavy saturation of them at one point), but otherwise age-related artifacts have been kept under control. The movie has been divided into 24 chapters.

The DTS-HD Master Audio 2.0 mono sound mix seems very era-appropriate. Dialogue has been nicely recorded and comes across without incident. Stanley Myers’ background music and the atmospheric effects are all balanced neatly with the dialogue. In quieter scenes, there is some soft hiss which can be heard, but it’s not a major distraction to the listening experience.

Nicholas Roeg Discussion Track: on an alternate audio track, a discussion with director Nicholas Roeg followed by a question and answer session is held at the National Film Theater after the premiere of the movie in 1983. The director talks about his career in films, his influences and mentors, and speaks directly about Eureka.

Paul Mayersberg Interview (53:18, HD): the film’s screenwriter discusses the origins of the story, the film’s eventual plot, the use of the occult throughout the movie, and his impressions of some of the unique characters.

Jeremy Thomas Interview (13:35, HD): the film’s producer shares memories of the various locations used in the film, his many experiences working with Nicholas Roeg, his admiration for the music used by Stanley Myers, and the problems with the film’s distribution caused by a change of studio heads.

Tony Lawson Interview (13:06, HD): the movie’s film editor talks about the difficulties of his work process and recounts some of the scenes from the movie that stick most firmly in his mind.

It won’t be everyone’s cup of tea, but Nicholas Roeg’s Eureka offers up an unusual saga of too much, too soon combined with his patented arresting visual motifs and a tone of unsteady melancholy. There are only 3,000 copies of this Blu-ray available. Those interested in purchasing it should go to either www.twilighttimemovies.com or www.screenarchives.com to see if product is still in stock. Information about the movie can also be found via Facebook at www.facebook.com/twilighttimemovies. 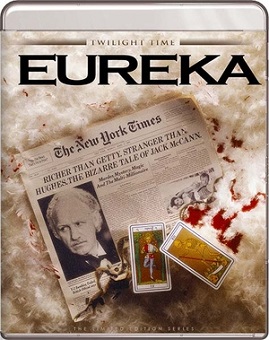