Emotiva’s anticipated top-of-the-line 9.1.6 AV processor, the RMC-1, priced at $4,999, will ship to dealers and users on November 15, 2018. The unit will include 4K UHD video management and can be expanded out to accommodate 24 channels of object-based audio. Some of you may remember that the product was originally previewed at CEDIA Expo 2017, and the company says that the RMC-1 is a ‘no-holds-barred AV processor’ that will support the latest Dolby Atmos and DTS-X object-oriented surround sound formats, as well as UHD 4k video sources.

The RMC-1 will also sport 16 fully balanced channels, including an all-analog preamplifier section, 32-bit AD/DA conversion, and an advanced 4K UHD video management system. Eight HDMI inputs and dual HDMI outputs support 2.0b and HDCP 2.2, ensuring ‘theater-like’ video quality from all 4K UHD HDR and Dolby Vision sources and equipment. A full list of specifications can be viewed below this article. 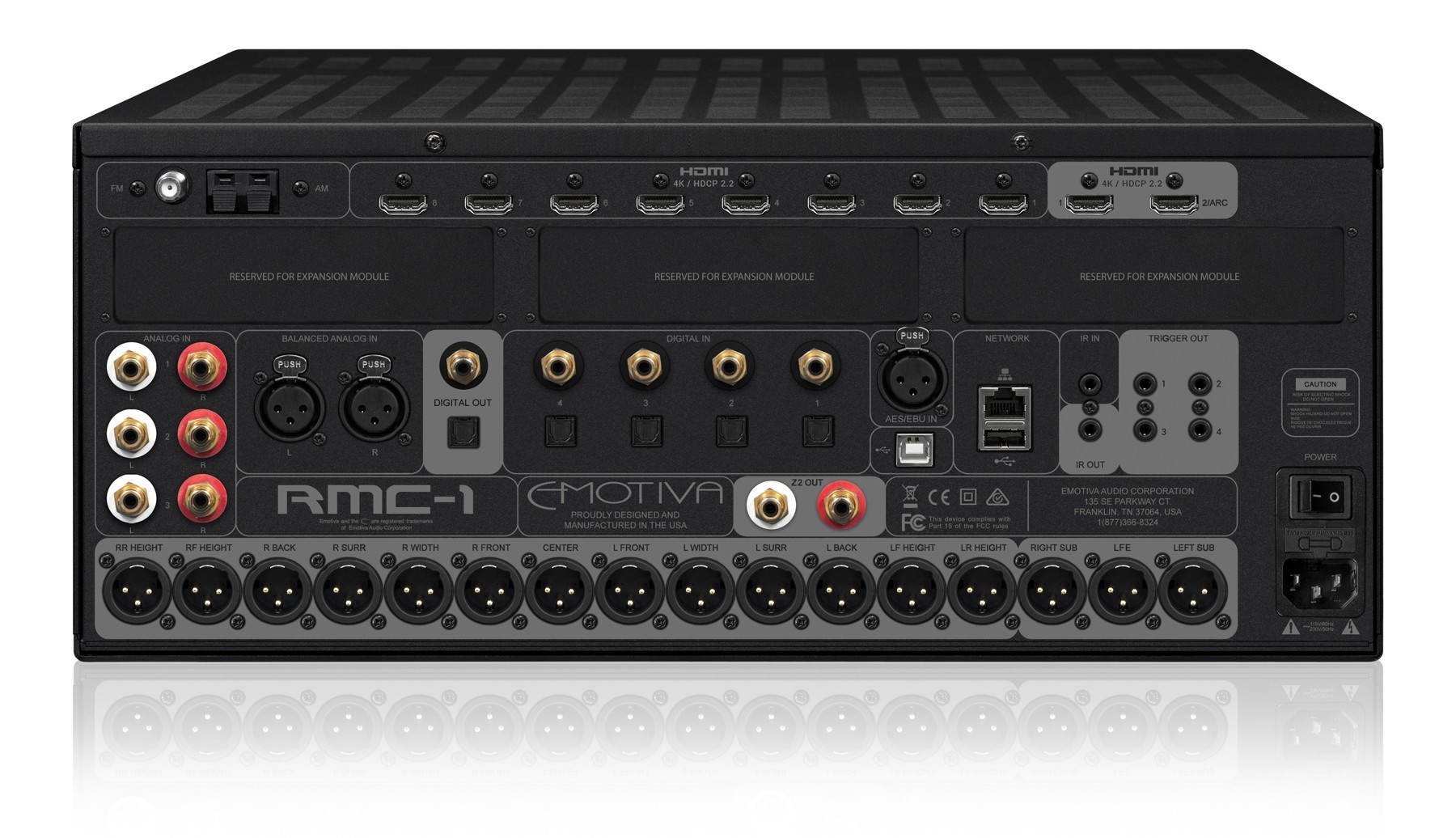 “Since we first announced the RMC-1, it has been one of the most requested of our upcoming models, especially by custom professionals who understand the amount of performance and value packed in its chassis,” said Dan Laufman, President and Founder, Emotiva Audio Corp. “We achieved our goal of designing and building the best AV processor in our company’s history. Of course, we’re talking about Emotiva, so the price is drastically lower than what you would expect for such an extraordinary product.”

The RMC-1 will feature a full 16 channels of Dolby Atmos and DTS:X surround sound in a 9.1.6 channels configuration, with a decoded audio signal for each channel that is processed by a separate AKM Verita 32-bit DAC, operated in ‘Differential Reference’ balanced mono mode. Support is provided for native audio decoding of single and double-rate DSD digital audio signals, accepted from either HDMI or USB sources.

Emotiva says that he precision circuitry will rival the most pricey audiophile preamps, while the unit’s ‘Reference Stereo’ mode should provide a listening experience that promises ‘unparalleled’ performance at the price point. Dirac Live room correction is also on board running all 16 channels at 96kHz sample rate, as well as 11-band parametric equalization on every channel for those who prefer to do their own tweaking. There is also compatibility with Room EQ Wizard room correction and analysis software.

A ‘simple’ menu system is accessed from front panel controls, and there is an included infrared remote and various network remote control options. System status is displayed on dual 64 x 256 front panel OLED displays, as well as a color on-screen display. Fully modular construction should ensure easy updates and service. The RMC-1 is made in the U.S.A. at the company’s headquarters in Franklin, TN.

Full features and specs of the RMC-1 below: