Forum List What's new Dark Style Change width
Log in Register
What's new Search
Menu
Log in
Register
Navigation
Install the app
More options
Dark Style
Close Menu
Posted on February 10, 2021 by Todd Erwin
You are using an out of date browser. It may not display this or other websites correctly.
You should upgrade or use an alternative browser.
Another solid 4K catalog release from Sony 4.5 Stars

Although available for several years digitally in 4K, Sony has released Neill Blomkamp’s Elysium, the follow-up to his debut feature District 9, on 4K UHD Blu-ray.

Writer-Director Neill Blomkamp continues his bleak look at the future of our society, specifically the ever-widening division of the have’s and have not’s, in his 2013 feature Elysium.

Elysium was captured at 3.3k resolution on RED Epic cameras and completed as a 4K digital intermediate (although visual effects were rendered at 2K and upscaled to 4K). The film has been available on UHD digital with both HDR10 and Dolby Vision high dynamic range for at least 3 years, with Sony now releasing the film on UHD Blu-ray with HDR10 only. As expected, this is another terrific-looking catalog release from Sony on UHD physical media. Detail receives a slight uptick, thanks to both the higher resolution (compared to its 1080p Blu-ray counterpart) and higher bitrate of UHD physical media. The major difference here is in the deeper blacks, more distinctive shadow details, brighter whites, and more life-like colors with the wider color gamut.

Sony’s UHD Blu-ray release of Elysium includes a lossless Dolby Atmos track that is a more immersive improvement over the already excellent DTS-HD MA 7.1 track from the prior Blu-ray releases (and is also included on the UHD disc as an option). Sounds are placed more precisely and move more fluidly on this Atmos track, adding in heights to immerse the viewer even more in the action sequences. LFE is more robust (as it usually is on most Atmos mixes), while dialogue is clear and understandable throughout.

Other than a collection of trailers, there really isn’t any new special features in this collection, although it is nice that Sony has included some of the more interesting extras on the UHD disc (which are duplicated on the accompanying Blu-ray that is identical to the disc included in Sony’s 3-movie Neill Blomkamp collection from 2017).

Digital Copy: An insert contains a code to redeem a digital copy (in UHD where available) on Movies Anywhere and redeemed towards a free movie from Sony Rewards.

Sony rarely disappoints with their catalog releases on UHD Blu-ray, and Elysium is no exception. 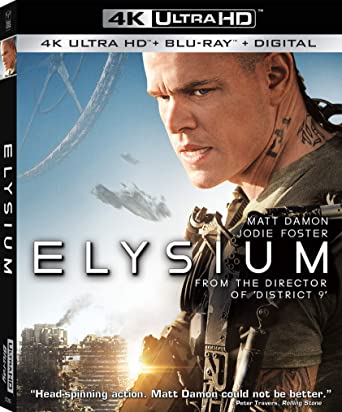