The WWE Studios’ formula of stalk and fight action scenarios for its home video feature films continues cheerily along with James Nunn’s Eliminators.

The WWE Studios’ formula of stalk and fight action scenarios for its home video feature films continues cheerily along with James Nunn’s Eliminators. Completely paint-by-numbers action filmmaking, the movie offers decent scenes of man-on-man/men combat along with plot turns that will frustrate and mortify most thinking viewers. The quality of the home video picture and sound lifts the enterprise into the professional realm, but it might be nice if the studio writers could concoct something less cookie cutter for its next home video enterprise.

A mistakenly coincidental home invasion in a London suburb outs former operative Thomas (Scott Adkins) now in witness protection with his young daughter (Lily Ann Stubbs) triggering her international arms dealer grandfather (James Cosmo) to send a hitman (Wade Barrett) to kill his son-in-law and bring his granddaughter to him. The hospitalized Thomas now must elude both the London police who aren’t convinced he’s not a murderer and the man contracted to kill him while somehow finding his daughter being held in an unknown social services safe house.

The Bobby Lee Darby-Nathan Brookes screenplay is full of holes (three masked men killed with their own guns in a private home by its owner and yet the police accuse him of murder and later refuse to believe a diplomatic order to release him; the operative and his handler hear the hitman in the adjoining safe house apartment and don’t take immediate cover knowing he has immense firepower at his disposal; the protagonist finally gets the adversary sworn to kill him at gunpoint and he doesn’t eliminate him and later ties him up with rope and doesn’t suspect he has a reason for wearing gloves) that don’t paint a very positive picture of the intelligence of the characters involved in the story. If one is only interested in the cat and mouse pursuit between the operative and the hitman, there’s a decent ebb and flow of close calls and narrow escapes (though the body count is alarmingly high for innocent bystanders yet there is no all point’s bulletin alerts about the lethal hitman on the loose). The movie’s primary reason for existing, the face-off between action star Scott Adkins and WWE wrestler Wade Barrett, does give fans what they’ve paid for: there are two different fights, both nicely staged and shot even though Adkins appears half a foot shorter and about fifty pounds lighter than his Goliath-like opponent which Barrett must compensate for by quite a bit of bending and stooping while the camera shoots from a lower angle to mask the height difference. Other chase moments and fights where Adkins must defend himself against multiple assailants (one impressive fight takes place in a small elevated cable car) are also competently handled, and director James Nunn even tries to work in some arty shots of light through windmill blades and barn timbers for some added visual variety.

Scott Adkins has done similar work in several of these made-for-home video action movies, and he’s very effective given the limited characterization built into the script (it’s not his fault the screenplay doesn’t paint him as very clever or intuitive). One believes he really does want to keep his daughter safe and will move heaven and earth to do so. Wade Barrett (IMDB lists his real name as Stu Bennett; Wade Barrett is the WWE character concoction for him) makes a fine relentless villain though, as with most action films (not just those produced by the WWE), no human body could take the continual punishment of body blows, skull cracks, and slams through walls and remain intact). Daniel Caltagirone is Thomas’ CIA handler Ray who tries his best to keep his charge safe from his pursuers, an honest portrayal, and James Cosmo is the ruthless grandfather out to reclaim his granddaughter and put an end to the man he blames for the death of his daughter Emma. Ty Glaser as social worker Stacey, Olivia Mace as Cooper’s henchwoman Hannah, Lily Ann Stubbs as the innocent Carly, and Stephen Marcus as the hard-headed Detective Quinn all offer more than acceptable performances.

The film is framed for home video at 1.78:1 and is presented in 1080p using the AVC codec. Filmed digitally, there is a very clean look to the photography with sharpness nearly always crisp and detailed (only a couple of slightly softer shots go against the norm). Color is excellent with appealing and believable skin tones. Contrast has been consistently applied, and black levels are very good if not always top notch. The movie has been divided into 20 chapters.

The DTS-HD Master Audio 5.1 sound mix is very rudimentary with most of the atmospheric effects directed toward the front soundstage. The rear channels get occasional echoes from dialogue and the rock songs on the soundtrack. Dialogue is pretty much contained in the center channel.

Hand-to-Hand Bishop (6:06, HD): director James Nunn and stars Scott Adkins and Wade Barrett discuss the fight scenes in the movie with fight coordinator Tim Man. The training necessary for the combat and the staging of one fight in a small cable car get special attention.

Bishop for Hire (3:22, HD): Wade Barrett discusses modifying his combat work for filming in this brief featurette which also has director James Nunn and co-star Scott Adkins praising his efforts in the movie.

Exactly what the made-for-home video action crowd expects it will be, Eliminators has a professional sheen to it despite its elementary plotting and its one dimensional characters. Decent video and audio quality will likely keep fans of this kind of action junk food happy. 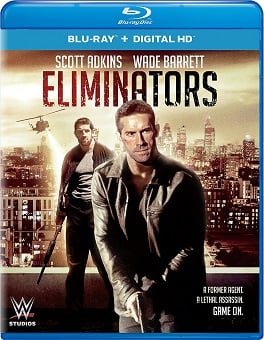