Why no season sets instead? 4 Stars

Disney’s popular animated series Elena of Avalor makes another return to DVD with the two-part episode from season one (often referred to as a “movie”), Realm of the Jaquins, with two additional and somewhat unrelated episodes plus ten bonus shorts.

In Realm of the Jaquins, three younger jaquins, Nico (Wilbur Zalvidar), Ciela (Jenna Lea Rosen), and Avion (Lincoln Melcher) are trying to qualify as guardians so that they can stay and protect Avalor. If they fail, they must return to their home realm of Vallestrella forever. Nico fails the test when Victor Delgado (Lou Diamond Phillips) shoots at and breaks one of the statues Nico was supposed to retrieve. Elena decides to travel to Vallestrella to demand that Nico be given a second chance, inadvertently allowing Victor and his younger sister Carla (Myrna Velasco) to enter the forbidden realm. Victor and Carla are there to free Marimonda (Noel Wells), an evil forest sprite (are they any other kind?), as a diversion to overthrow Avalor. Elena and the cast sing a few songs, meet the oracle sun bird Quita Moz (Cheech Marin), and eventually save the day. Little does Elena know that Victor and Carla’s deception worked, reuniting them with evil sorceress Shuriki (Jane Fonda).

The disc also includes season two episodes Three Jaquins and a Princess and Shapeshifters, which do not really further the storyline from Realm. In fact, there is such a gap in the storyline between Realm and Shapeshifters, that I really wish Disney would release full season sets on DVD, or at the very least volumes in episodic order, than this sporadic releasing of a handful of episodes per disc release.

The animation on all three episodes is colorful and quite well-done for a television series, with little to no frame stuttering or motion blur. The two-part Realm of the Jaquins obviously had a higher per-minute budget than the other two episodes included, which would indicate the studio had an eye to release this episode on DVD as a mostly stand-alone release to begin with.

As I stated above, the episodes included are very colorful, and I saw very rare and brief instances of banding in this 480p MPEG-2 standard definition transfer. Detail was surprisingly good, especially when upscaled to 2160p by my Sony UBP-X800 UHD Blu-ray player.

Disney has given this DVD only Dolby Digital 2.0 stereo tracks in English, Spanish, and French. In English, it provides a nice, wide front soundstage with very good separation as characters move out of frame. Music and effects are spread rather evenly across the front and towards the rears when played back in Pro-Logic or Dolby Surround mode. Dialogie is clear and understandable throughout.

A total of ten “bonus” shorts are included, split between two “series.”

Adventures in Vallestrella: Elena and her sister Isabel travel and explore Vallestrella in five shorts, each running 1:48 – Flight of the Butterfrog, Sleeping Sunbird, Fast Food, Peabunny Boogie, and Human Nature.

Scepter Training with Zuzo: Spirit fox Zuzo (who makes his first appearance on this disc in these shorts) helps train Elena on how to use her magical Scepter in these five shorts, each running 1:48 – The Heist, Royal Treasury Escape Room, Nothing But Blaze, Stowaway, and Don’t Be Our Guest.

The four episodes (Realms is technically a two-part episode presented as a double) are entertaining, and video quality is very good for a DVD, but I’d rather see Disney release their television product in season sets or volumes instead of these random episode choices. 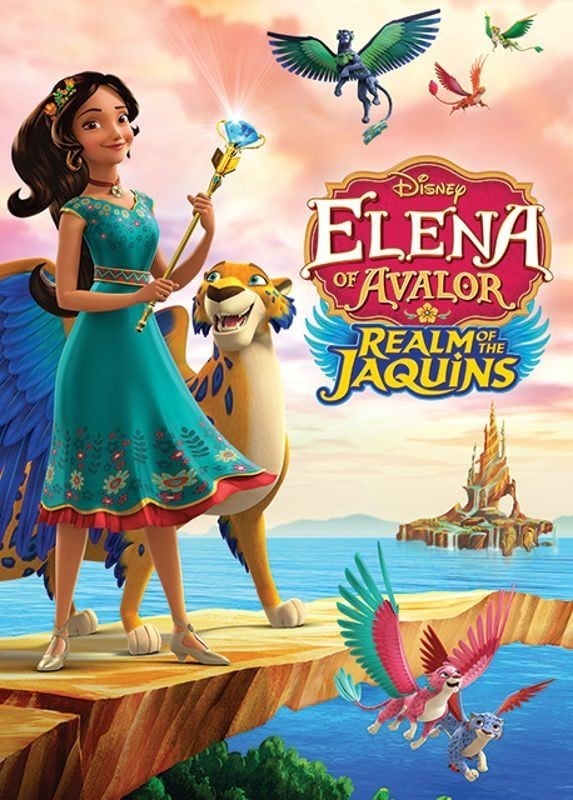