The best season yet for this singular mystery series. 4.5 Stars

Season six of CBS’ Elementary found the perfect balance between plot development and character interaction making for the best set of episodes in the show’s history.

The episodes for the sixth season of CBS’ hit procedural Elementary were a long time coming. Instead of premiering the series in the fall or even at midseason, the network in their infinite wisdom held the show back until late spring with only a couple of weeks left in the 2017-2018 season. The majority of the season’s twenty-one episodes were broadcast during the summer months where a small but fiercely loyal audience consumed them. And as the old adage goes, “good things come to those who wait,” for the sixth season is likely the very best one in Elementary’s storied history with a raft of marvelous mysteries that rank among the most baffling ever to appear on the series, involving story arcs for all four principal characters, and a wonderful season-long villain who didn’t wear out his welcome. And the biggest surprise arrived while the sixth season was playing out. CBS renewed the show for yet another season.

True to its superior mystery nature, the program’s writers outdid themselves this season with puzzling plots which more often than not begin as simple abductions, thefts, or killings and often unwind themselves cunningly in all kinds of unexpected directions with usually unexpected perpetrators unmasked in the show’s final minutes. Among the last of the weekly drama series with self-contained mystery elements surrounded by ongoing character story arcs, Elementary has now become the zenith of crime shows on network television. And the show’s very unexpected but terrific change of direction in the season finale (which, when written, was thought to be serving as a series finale before the unexpected renewal) promises a seventh season of new mysteries in a different locale and with a different supporting cast.

But this season’s arcs remained almost all well thought out and involving. Sherlock Holmes (Jonny Lee Miller) finds himself suffering from Post Concussion Syndrome (PCS) in the first third of the season’s episodes. Not at his best, he becomes an easy mark for the season’s major adversary, a serial killer named Michael Rowan (Desmond Harrington). As explained in one of the bonus features in the set, the show’s order was increased from thirteen episodes to twenty-one while filming was underway, so Michael of necessity takes a long sabbatical from the show in the middle of the season while Sherlock is recovering from his PCS allowing a majority of the shows to be about something else other than a serial killer of women on the rampage. And once he does return to the show, his return is anything but predictable also contributing to the excellence of the season overall. As for Joan Watson (Lucy Liu), she deals with the death of her biological father in the early going bringing her back into contact with her half-sister Lin (Samantha Quan), must cope with her mother’s (Freda Foh Shen) slowly advancing Alzheimer’s, and later begins the lengthy process of trying to adopt a child as a single mother, a plot hook that works its way into a couple of this year’s cases. Detective Marcus Bell (Jon Michael Hill) is tapped for a potential job with the U.S. Marshal Service thanks to a recommendation by Sherlock making his time as the third side of the investigative triangle quite finite. And Captain Tom Gregson (Aidan Quinn) learns that his police officer daughter Hannah (Liza J. Bennett) is an alcoholic, a situation which will have some repercussions for other members of the team later on.

Jonny Lee Miller, Lucy Liu, and Jon Michael Hill all manage to direct an episode apiece this season in addition to their weekly acting chores, and each does well with the assignment. As for their performances, Miller and Liu especially imbue their performances with an added force this season, possibly because they expected the season to be their last, and a farewell sequence in the season finale episode is so rich with emotion and camaraderie that it’s a master class in acting and reacting. Desmond Harrington underplays beautifully as the serial killer. Quiet and menacing as opposed to bombastically maniacal, Harrington makes a superb foil for Jonny Lee Miller’s Sherlock, and his final confrontation with Joan will remind some keen-eyed viewers of The Shining. Recurring characters from seasons past also pop in for a visit. John Noble is featured in a couple of episodes as Sherlock’s notorious father Moreland, and Rich Sommer returns as the eccentric mathematician Harlan Emple when a student of his goes missing. Award-winning stage stars like Christian Borle, Michael Cerveris, Dan Butler, Karen Ziemba, Tonya Pinkins, and Brian Stokes Mitchell add luster to the season’s list of suspects.

Here is the list of twenty-one episodes contained on six discs in the season six set:

1 – An Infinite Capacity for Taking Pains

10 – The Adventure of the Ersatz Sobekneferu

16 – Uncanny Valley of the Dolls

18 – The Visions of Norman P. Horowitz

21 – Whatever Remains, However Improbable

The transfers are presented in their widescreen television aspect ratio of 1.78:1 and are anamorphically enhanced for widescreen televisions. At 480p quality, these are mostly outstanding transfers. Sharpness is exceedingly crisp and inviting most of the time with as much detail as can be squeezed from standard definition video. Color is quite warm and nicely under control throughout with appealing and realistic skin tones. Black levels are rich, and shadow detail is nicely delivered. There are occasional problems with moiré or aliasing expected with standard definition, but they aren’t excessive anomalies. Each episode has been divided into 6 chapters.

The disc offers both Dolby Digital 5.1 and 2.0 stereo surround sound mixes. Both are effective. For the purposes of this review, the Dolby Digital 5.1 mix was utilized for all but one episode. The score by Sean Callery is the primary inhabitant of the surround channels, and it’s effectively and wittily placed to maximize the series’ mixture of quirky and dramatic moments and sounds very expansive in most episodes. Being a dialogue-heavy show, the recording of voices is very professionally done with the dialogue residing in the center channel. Sound effects occasionally do pan through the soundstage or occupy split channels, but with the series being shot in New York City, more of the city’s ambiance could be reflected in the audio mix. Bass seems especially heavy this season.

Deleted Scenes: three scenes are presented across the season, attached to the episodes from which they were taken (episodes 7, 17, and 21).

Six of One, Half a Dozen of the Other (20:56): Creator-producer Rob Doherty discusses the season’s story arcs and how they were impacted by CBS’ increased episode order once filming had begun. Also discussing their characters and story arcs are Jonny Lee Miller, Lucy Liu, John Noble, Aidan Quinn, and Jon Michael Hill.

Season six of CBS’ Elementary found the perfect balance between plot development and character interaction making for the best set of episodes in the show’s history. And with the surprising turn of events in the season finale, it sets the show up for a potentially marvelous new season of adventures with our two heroes. Highly recommended despite the lack of a high definition release.

As expected, CBS has announced that the upcoming seventh season of this wonderful show will be its last. All 13 episodes for its final season have already been shot, so it's just waiting to be shown. No word on when that will be yet.

It had a good run as I just hope they wrap the show up appropriately without any BS.

https://tvbythenumbers.zap2it.com/more-tv-news/elementary-concluding-seventh-season/
Expand signature
Crawdaddy's favorite "The Mandalorian" Quotes: "This is the Way" and "I have Spoken"

I have not kept up with the blog info and thought that this had just ended with Sherlock and Watson across the pond - thought it was a perfect ending particularly with the closing shot. 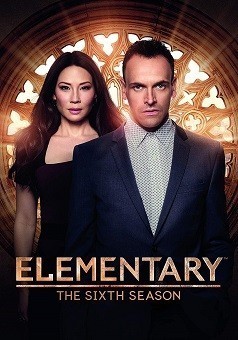