Forum List What's new Dark Style Change width
Log in Register
What's new Search
Menu
Log in
Register
Navigation
Install the app
More options
Dark Style
Close Menu
Posted on September 19, 2019 by Matt Hough
You are using an out of date browser. It may not display this or other websites correctly.
You should upgrade or use an alternative browser.
An above average season to bring the series to a close 3.5 Stars

CBS’ Elementary can point with pride at seven unusually successful seasons of mystery and mayhem.

CBS gifted the production team of its hit procedural Elementary and its many fans an unexpected surprise by renewing the show for a final thirteen-episode season. Series creator Rob Doherty was quite taken aback by the unexpected renewal as he had delivered what he thought (and was) a dynamite series finale at the conclusion of season six. However, with thirteen new episodes to create, the writers had their work cut out for them digging themselves out of a hole they had dug with their former conclusion which would allow Sherlock Holmes and Dr. Watson to return to New York from their new London home to continue with their adventures.

Sadly, the writers weren’t fully successful with their walk-back. There is never really adequate explanation of how Holmes was cleared of the murder charges against him (to which he had falsely confessed to get partner Joan Watson off the hook) especially since the real murderer (known to Sherlock and Joan as the daughter of their beloved Captain Gregson) is never seemingly brought to justice. It’s a messy detail that’s just swept under the rug. Instead, the writers take a page out of the Bones playbook and craft a super villain for the show’s final season: Odin Reichenbach (James Frain), a billionaire with infinite resources and the full cooperation of every major governmental agency here and abroad. He’s a software genius who’s crafted a way to anticipate murder sprees before they happen. He then dispatches underlings vigilante-style to kill the killers before they strike. Sherlock (Jonny Lee Miller) and Joan (Lucy Liu) stumble onto the suspicious activities from London in episode two when Captain Gregson (Aidan Quinn) is strangely wounded at an empty baseball field which returns them to New York to investigate. Finding the man who shot him is fairly routine, but the greater web of vigilante justice underneath Gregson’s shooting occupies most of the rest of the season in the long-range story arc.

Of course, there are also individual cases for most of the episodes which begin and end before the conclusion of each episode. As is usual with these mysteries, the conundrums the show’s staff writers have created are superb: twisty and always surprising often taking us in quite a different direction from where the investigations first began or seem headed. This season, models attacked with acid, a secret storage facility for smuggled goods, a sniper on the rampage, and a sculptor’s murder all prove the starting points for some great problems for our intrepid duo to solve. And in the season’s best episode, the return of perpetual liar Cassie Lenue (Ally Ioannides) who begs Holmes and Watson for their help in solving the murder of a woman who once was her foster mother gives rise to a baffling case not made easier by Cassie’s continual string of falsehoods and misdirections. The series finale jumps ahead three years to allow us to see the futures of the show’s principals after the (most unsatisfying) dispatch of their season-long nemesis.

In addition to each of them directing an episode during the final season, Jonny Lee Miller and Lucy Liu (who goes blonde for some unfathomable reason for these last thirteen shows) inhabit these characters with the surety and snap that they’ve always possessed. Jon Michael Hill as Detective Marcus Bell and Aidan Quinn as Captain Gregson offer solid support throughout, and John Noble makes a welcome reappearance as Sherlock’s father for one memorable episode near the end of the series. James Frain enacts a striking villain: calm and collected even when spouting the most hair-raising suppositions, and a special shout-out needs to be offered to both Tim Guinee who returns as NSA Special Agent McNally and especially Jordan Gelber as the unsung New York medical examiner Dr. Eugene Hawes who has parried quips and quotes with the duo for seven seasons.

Here are the thirteen episodes contained on three discs in the seventh season set:

3 – The Price of Admission

7 – From Russia with Drugs

The transfers are presented in their widescreen television aspect ratio of 1.78:1 and are anamorphically enhanced for widescreen televisions. At 480p quality, these are mostly outstanding transfers. Sharpness is exceedingly crisp and inviting most of the time with as much detail as can be squeezed from standard definition video. Color is quite warm and nicely under control throughout with appealing and realistic skin tones. Black levels are rich, and shadow detail is nicely delivered. Try as I could, I wasn’t able to discern any aliasing or moiré patterns present in these images, quite a surprise for standard definition DVDs. Each episode has been divided into 6 chapters.

The disc offers both Dolby Digital 5.1 and 2.0 stereo surround sound mixes. Both are effective. For the purposes of this review, the Dolby Digital 5.1 mix was utilized for all but one episode. The score by Sean Callery is the primary inhabitant of the surround channels, and it’s effectively and wittily placed to maximize the series’ mixture of quirky and dramatic moments and sounds very expansive in most episodes. Being a dialogue-heavy show, the recording of voices is very professionally done with the dialogue residing in the center channel. Sound effects occasionally do pan through the soundstage or occupy split channels, but with the series being shot in New York City, more of the city’s ambiance could be reflected in the audio mix. Bass seems especially prominent this season.

Deleted Scenes: five scenes during the season’s final three episodes are paired with the episodes from which they were excised.

Mystery Solved: The Final Season (24:04): creator/executive producer Rob Doherty explains the conundrum the writers found themselves in having to undo what they had done at the end of season six. Then, what they did with season seven is discussed by Doherty and also Lucy Liu, Jon Michael Hill, and Aidan Quinn. Strangely, Jonny Lee Miller is not present for any interviews about the final season.

Holmes Is Where the Heart Is (7:35): Members of the writing staff including Rob Doherty, Jason Tracey, Tamara Jaron, Jordan Rosenberg, Jeffrey Paul King, Bob Goodman, and Robert Hewitt Wolfe discuss how writing for this series has made them better of their jobs.

CBS’ Elementary can point with pride at seven unusually successful seasons of mystery and mayhem. That the final season wasn’t its best is somewhat surprising, but even at its weakest, the show has always offered welcome entertainment that has never talked down to its audience. Recommended!

When the entire series is made available in HD on iTunes at a reasonable price then and only then will I spend my money on buying this wonderful series on a home video format. Other than that, thank you for your review.
S

Good review, thanks. I agree the weakest parts of the season were the transition back to New York, and Watson's blonde hair. I would add that it was a mistake not bringing Moriarty back in some way.

stuartfanning said:
I would add that it was a mistake not bringing Moriarty back in some way.
Click to expand...

Well, she exists as an off-screen puppeteer in a couple of episodes, but I know what you mean. Having her back in the flesh would have been a nice coda for the series. I guess Natalie was just too busy to come back.

Robert Crawford said:
When the entire series is made available in HD on iTunes at a reasonable price then and only then will I spend my money on buying this wonderful series on a home video format. Other than that, thank you for your review.
Click to expand...

Similar sentiments here too from a slightly different perspective.

Maybe I'll revisit this show in the future. (Maybe not).


(On a more general tangential rant).

I've found that it is largely hit-or-miss for me, as to whether a particular show has any rewatch value for me. This hit-or-miss can be further subdivided in regard to whether I'm watching on the dvr, dvd/bluray, streaming, reruns, etc ...

Most of my bad experiences with tv on dvd/bluray, were shows which had an extremely high rewatch value for me during their original first-runs where I watched then-current new episodes as many as a dozen times during the week(s) between new episodes. Though when I finally picked up the dvd (or bluray) season sets, these exact same shows had very little to no rewatch value for me on dvd/bluray. For example such as shows like Fringe, Person of Interest, the Nikita reboot, , etc ...

One very extreme case for me is The Big Bang Theory. I've found that this show is only watchable for me in live daily reruns and (formerly) first-run episodes on generic network tv. For reasons I don't understand, I've found that The Big Bang Theory is very difficult to watch on dvd/bluray. Also the times I recorded reruns on the dvr, I almost never watched them and they ended up being deleted unwatched. (I've found this was also the case for Star Trek reruns where I liked watching them in live daily reruns, but found very litte rewatch value for the exact same episodes on dvd/bluray or recorded to the dvr).

Currently the only shows which have any rewatch value for me on dvd and/or reruns, is stuff like Criminal Minds and the NCIS franchise. I'll admit it will be a crapshot roll-of-the-dice as to whether this will still be the case for me in the future, once Criminal Minds and/or NCIS go off the air completely. In practice, I've found that most tv shows' rewatch value for me nosedives to almost zero, once the show in no longer producing new episodes. For example, back in the day I use to watch daily CSI franchise reruns just about every day. Fast forward to today, I find that I have no interest anymore in watching the daily CSI reruns.

I confirmed it here when I noticed some discoloration on a season 1 disc. "Had" to watch the pilot, then fast-forwarded the other three episodes plus bonus features to ensure they still tracked / played OK.

The disc is fine, and it was tons of fun for me seeing that pilot for the first time in a few years, now that we know where various storylines and characters ended up.

In "normal" viewing my wife and I are in the middle of the 6th season - there were some shows she missed on broadcast due to work schedules - and we look forward to revisiting the 7th.

With this many episodes and a plethora of convoluted mysteries, I find it very hard to remember the solutions of individual cases with most of the episodes in any given season. Just like with Perry Mason: I can watch the entire run of nine seasons, wait a few months, and then begin watching and not be able to piece together solutions before they're presented at the end.

But that's the way I encounter return visits to these mysteries. Others may have variable mileage.
You must log in or register to reply here. 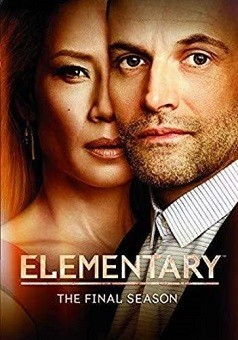