Season Four turned out to be a stronger season for Elementary than the previous one with a brilliant string of cleverly concocted mysteries and a really interesting set of story arcs for the show’s main characters.

It seems as if the producers of CBS’ hit Sherlock Holmes procedural Elementary seek to shake their show up each season fearing, perhaps, that without constant change a series will stagnate and fans will lose interest. So, in season two, Sherlock Holmes’ enigmatic brother Mycroft popped in and out of the season eventually drawing Holmes and Watson into dire foreign intrigue. In season three, Holmes gained a new assistant for half of the season, an abrasive Cockney lass who eventually learned the craft of investigating and went off on her own adventures. For season four, Holmes’ powerful but mistrustful father Morland joined the show inserting himself into the lives of our two intrepid investigators until his own story came to a head in the season’s final three episodes. With Morland’s portrayer John Noble not a part of the regular cast for season five, who knows what the producers have in store for the new season.

Season four introduced three ongoing story arcs for three of the principal characters on the series which sporadically came to the fore during other routine investigations. For Joan Watson (Lucy Liu), both an abrasive cop from another NYPD precinct along with a heretofore unknown half-sister brought out-of-the-ordinary interest to a number of season four episodes. For Sherlock Holmes (Jonny Lee Miller), romance of a somewhat quirky variety reared its head, the object of his affection being an autistic young lady with a fondness for cats. And most importantly since his involvement with the dynamic detective duo spanned the season, Sherlock’s father Morland Holmes (John Noble), an international multi-millionaire power broker and deal maker, reenters his son’s life ostensibly to check on his son’s progress on rebuilding his sobriety after falling off the heroin wagon at the end of season three but actually to investigate the murder of his girl friend and late in the season to protect himself, Sherlock, and Joan from attack from an unknown enemy.

Even with one or more of those on-going stories interrupting the flow of the regular procedural aspects of Elementary, the season nevertheless provided a wealth of perplexing mysteries, many with most unusual and unpredictable solutions. Sherlock, Joan, NYPD Detective Marcus Bell (Jon Michael Hill), and precinct Captain Thomas Gregson (Aidan Quinn) find themselves facing cases involving the murder of doppelgangers, a doctor gutted and stripped to become a skeleton, an amazingly clever teen girl con artist, the killing of a Russian gangster, the shady manipulations of a for-profit university founder, death at the roller derby, a puzzling invasion of a notorious biker clubhouse, some weird murders in heavily protected Chinatown, a murder over skyscraper air rights,, the death of a survivalist, and most famously, Elementary’s riff on The Hound of the Baskervilles (Britain’s Sherlock did its Hound tribute in season two).

With his father a constant irritation for him and love finally returning to his life years after his upset with the notorious Irene Adler, actor Jonny Lee Miller really gets the chance to display a wide range of emotions this season as Sherlock Holmes. The relationship with Watson has deepened this season as well so that when he learns late in the season that she’s been doing work for his father behind his back, the verbal face-off between Miller and Lucy Liu provides one of the season’s acting highlights. Liu’s Joan is more skilled and proficient than ever meeting many challenges head-on and never backing down from a fight or a challenge. John Noble brings a marvelous sense of mystery to the role of Morland Holmes and while he doesn’t appear in every episode, his every appearance is certainly a treat. Jon Michael Hill and Aidan Quinn continue with their solid performances as Bell and Gregson, and guest stars ranging from John Heard to Tate Donovan to Virginia Madsen (a love interest for Gregson) add additional spice to the series.

Here are the twenty-four episodes contained on six discs in the season four set:

2 – Evidence of Things Not Seen

6 – The Cost of Doing Business

11 – Down Where the Dead Delight

The transfers are presented in their widescreen television aspect ratio of 1.78:1 and are anamorphically enhanced for widescreen televisions. At 480p quality, these are mostly outstanding transfers. Sharpness is exceedingly crisp and inviting most of the time with as much detail as can be squeezed from standard definition video. Color is warm and nicely under control throughout with appealing and realistic skin tones. Black levels are rich, and shadow detail is nicely delivered. There are occasional problems with moiré and aliasing, but they aren’t excessive. Each episode has been divided into 6 chapters.

The disc offers both Dolby Digital 5.1 and 2.0 stereo surround sound mixes. Both are effective. For the purposes of this review, the Dolby Digital 5.1 mix was utilized for all but one episode. The score by Sean Callery is the primary inhabitant of the surround channels, and it’s effectively and wittily placed to maximize the series’ mixture of quirky and dramatic moments and often sounds rather expansive. Being a dialogue-heavy show, the recording of voices is very professionally done with the dialogue residing in the center channel. Sound effects occasionally do pan through the soundstage or occupy split channels, but with the series being shot in New York City, more of the city’s ambiance could be reflected in the audio mix.

Deleted Scenes: eight scenes are spread across five of the six discs in the set. They are attached to the episodes from which they were extracted.

Mina, Cassie & Ally ((7:14): executive producer Robert Doherty and actors Jonny Lee Miller, Lucy Liu, and Jon Michael Hill extol the performance of young actress Ally Ioannides who portrays the enigmatic Mina/Cassie in the episode “Miss Match.” The actress also speaks about her impressions of the character and her delight of being on the show.

Wag the Dog: Hounded (3:45): a brief discussion by producers Robert Doherty and Robert Wolfe on the creation of the dog for the episode “Hounded,” the program’s tribute to The Hound of the Baskervilles.

The Sounds of Fourth (19:57): an overview of season four’s major story arcs provided by the show’s regular cast and show creator Robert Doherty.

Villainy! (8:49): producers Robert Doherty and John Polson discuss the writers’ approach to the creation of villains for the show’s mystery plots and mention some of their favorites from season four.

Father Holmes (5:25): John Noble expresses his delight with the character of Morland Holmes and his admiration for the top flight production of the series. Co-stars Jonny Lee Miller and Lucy Liu rave about his participation in the season.

Season Four turned out to be a stronger season for Elementary than the previous one with a brilliant string of cleverly concocted mysteries and really interesting story arcs for the show’s main characters. Apart from the standard definition box set release rather than a high definition series of transfers, there’s not much to criticize about this CBS/Paramount release. Recommended! 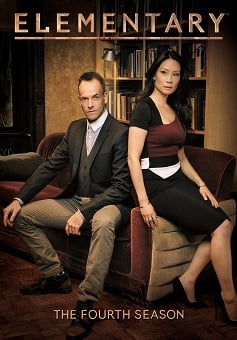