Posted on August 28, 2017 by Matt Hough
An excellent fifth season for the venerable detective series. 4 Stars

An excellent fifth season of Elementary afforded all of the cast the chance to expand their characters in new directions and offered viewers another tantalizing array of mysteries on which to puzzle.

The fifth season of Elementary retained its complex procedural puzzle structure and added a new long-range story arc for the season, this time dealing with someone related to Dr. Watson’s previous life rather than its being friends or family of Sherlock Holmes sidetracking the team. The results were pretty much the same as the previous seasons: superb mysteries most weeks and a step-by-step process of telling the backstory and new story with the new recurring character who appears in about half of the season’s episodes.

The new character that reenters the life of Joan Watson (Lucy Liu) and Sherlock Holmes (Jonny Lee Miller) is Shinwell Johnson (Nelsan Ellis), a former member of the South Bronx Killers street gang (known through most of the season as SBK), now released from prison and looking to get his life back on track. During the eleven episodes in which his story appears (usually subsidiary to another investigation but increasingly more important in the season’s final episodes), Joan tries to help him land a job and find a decent place to live but later comes to learn that he’s edging back into gang life, supposedly as an FBI confidential informant to bring down the problematic street crew. But Shinwell’s story turns out to be a complex one going back to the murder which had landed him in prison, the present-day prickly relationship with his teenage daughter, and various members of the FBI and police department who are using him for their own agendas. Joan and Sherlock try to run interference for him to keep him from either going back to jail or being killed, but the season culminates in a several part story involving the leadership of SBK and one particular member’s plans of leaving the gang and getting away with numerous crimes including murder.

The two supporting regulars also have forward movement in their personal lives this season. Captain Gregson (Aidan Quinn) becomes increasingly serious about his relationship with his MS-afflicted girl friend Paige (Virginia Madsen), but even more important to the season is Detective Marcus Bell’s new relationship with ADA Chantal Milner (Chasten Harmon). Several episodes this season reflect problems Bell and Chantal encounter with Chantal’s ex-husband Roy (Robert Christopher Riley), a former detective who knows a few things about setting up situations that drag down one or both of them into nerve-fraying confrontations that don’t portend a happy end. Sherlock himself seemingly ends his quirky romance with savant Fiona Helbron (Betty Gilpin) even though several episodes had been given over to developing it in season four.

As for their closed-ended cases this season, they rank among the best of the series. While a couple of cases make mention of the Musgrave ritual and the beryl coronet (names associated with the Doyle canon), only one case revolves around a famous name from the original stories: Lady Frances Carfax only here it’s a mystery surrounding the abduction of a famous bass guitar with that name. Sherlock’s former third season protégé Kitty (Ophelia Lovibond) also returns this season for a two-part episode. Additionally this season are conundrums concerning a serial bomber, the kidnapping of a computer programmer, a snake venom murder plot, the death of the inventor of a new synthetic meat product, the search for a stolen log book of an infamous pirate, and the murder of a reality show contestant. Of course, in almost all of these cases, what appears to be the crime often leads to something much more dastardly and complex than it first appears to be which is what makes Elementary such a treat to watch. Alone among CBS’ procedurals, its mystery plots are the most convoluted and require careful attention if the viewer has any hopes of arriving at the solution before our intrepid detectives.

Once again, the writers continue to give Jonny Lee Miller remarkable material to perform within the confines of his genius Holmes character. This season, there are several confrontations with Watson not only over Shinwell’s intrusion into their lives but also her suspicions that something about Sherlock is off (it is, as it turns out, as revealed in the season’s final two episodes, another somewhat irritating device inserted by the writers to give the series a shaky cliffhanger to end the season). Lucy Liu’s Watson is steadfast to a fault in trying to help her former patient Shinwell, but Watson spends much of the season rather harried with her being spread very thin trying to help Sherlock, Shinwell, and Marcus, all to the ignoring of her own personal life. Nelsan Ellis does a fine job with Shinwell Johnson, keeping him rather enigmatic and somewhat dangerous through his tenure with the show. The actor’s unexpected death, of course, precludes any further use of his character in flashbacks next season, but it was great that Ellis had this complicated character to act before his passing. Aidan Quinn and Jon Michael Hall do their usual sturdy jobs as the police with whom Holmes and Watson work.

Here are the twenty-four episodes contained on six DVDs in the season five case:

3 – Render, and Then Seize Her

4 – Henny Penny the Sky Is Falling

5 – To Catch a Predator Predator

8 – How the Sausage Is Made

9 – It Serves You Right to Suffer

17 – The Ballad of Lady Frances

20 – The Arts of Sleights and Deceptions

The transfers are presented in their widescreen television aspect ratio of 1.78:1 and are anamorphically enhanced for widescreen televisions. At 480p quality, these are mostly outstanding transfers. Sharpness is exceedingly crisp and inviting most of the time with as much detail as can be squeezed from standard definition video. Color is quite warm and nicely under control throughout with appealing and realistic skin tones. Black levels are rich, and shadow detail is nicely delivered. There are occasional problems with moiré or aliasing, but they aren’t excessive. Each episode has been divided into 6 chapters.

The disc offers both Dolby Digital 5.1 and 2.0 stereo surround sound mixes. Both are effective. For the purposes of this review, the Dolby Digital 5.1 mix was utilized for all but one episode. The score by Sean Callery is the primary inhabitant of the surround channels, and it’s effectively and wittily placed to maximize the series’ mixture of quirky and dramatic moments and sounds very expansive in most episodes. Being a dialogue-heavy show, the recording of voices is very professionally done with the dialogue residing in the center channel. Sound effects occasionally do pan through the soundstage or occupy split channels, but with the series being shot in New York City, more of the city’s ambiance could be reflected in the audio mix.

Deleted Scenes: eight scenes are spread across three of the six discs in the set. They are attached to the episodes from which they were extracted.

For the Hundredth Time (6:04): the cast and crew celebrate the series’ 100th episode.

Flashbacks (6:18): in the year’s best episode “Over a Barrel,” sequences from three episodes from previous years are restaged in order to attach them to events in this new story. Producers Jeffrey Paul King and John Polson and costume designer Rebecca Hoffer discuss what had to be done to make these scenes work in the modern story.

The Fifth Elementary (20:39): an overview of the fifth season as a whole. Speaking about the challenges and achievements of the season are producers John Polson, Jeffrey Paul King, Robert, Doherty, Bob Goodman, and Robert Wolfe and actors Nelsan Ellis, Lucy Liu, Jonny Lee Miller, Jon Michael Hill, and Aidan Quinn.

Reasoning Backward (10:22): writer/producers Robert Doherty, Jeffrey Paul King, Robert Wolfe, and Bob Goodman discuss where ideas for new mysteries come from and their approach to making the puzzles as complex as they can.

An excellent fifth season of Elementary afforded all of the cast the chance to expand their characters in new directions and offered viewers another tantalizing array of mysteries on which to puzzle. Apart from the standard definition box set release rather than a high definition series of transfers, there’s not much to criticize about this CBS/Paramount release. Recommended! 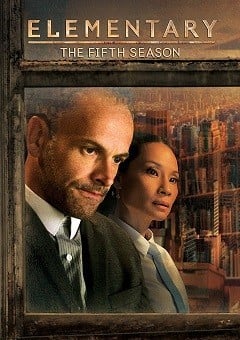