Writer-director Bo Burnham and star Elsie Fisher create something magical with Eighth Grade: that rare blend of truthful storytelling that feels absolutely real and authentic and that can play well with both teenage and adult audiences. Although eighth graders in 2018 face a digital landscape unique to their time, Burnham and Fisher are able to use the trappings of today to explore what proves to be a very universal, timeless story. Eighth Grade is a film that deserves to find its audience on home media.

Writer-director Bo Burnham’s debut film is the rarest of things: a story that’s hyper-specific to a particular time and age that is able to use that specificity to tell what’s ultimately a universal story that can be enjoyed by people of all ages. In exploring what it means to be on the verge of high school in 2018, Burnham and actress Elsie Fisher authentically capture that age in all of its glory and folly. Much like actual eighth graders, the film has moments of spectacular awkwardness punctuated by small victories.

As Kayla Day, an eighth grade student finishing her final week of middle school, Fisher is absolutely extraordinary. The entire movie sits on her shoulders, and she handles it beautifully. It’s extraordinary to see such a vulnerable and open performance from any actor, let alone one so young. By letting us see Kayla in all of her awkward glory, rather than the smoothed-out version of imperfect that films like this usually substitute, Fisher immediately wins the audience’s sympathy. Though Kayla makes mistakes and exercises imperfect judgment at times, rather than distancing us, she makes us care more.

In crafting the story, it’s clear that Burnham has a lot that he wants to say: about youth and how children seem to grow up faster all the time; about technology and the way it can amplify isolation and bullying; and so much more. What’s particularly delightful about Eighth Grade is how well Burnham is able to explore all of these issues organically through Kayla’s point of view, without it ever feeling contrived. Burnham doesn’t have to announce his point of view or beat the audience over the head with it. By simply placing Kayla in the situation and allowing us to experience it with her, her experience is made universal. Burnham also has a keen instinct for just how long scenes need to play out, with every moment of the film’s 94 minute running time used to maximum effect.

A great deal of Eighth Grade either takes place on screens, or involves Kayla interacting with screens. Eschewing the technique of superimposing the screen content over the frame, which is the way many modern films with a heavy screen presence show the audience the content, Burnham makes the more grounded choice of showing Kayla interacting directly with her devices, and showing close-ups of those devices rather than on-screen graphics. This was an inspired choice, which emphasizes the physical closeness that Kayla has with her devices in contrast to the wider distance she has with the people in her real life. Burnham also uses the light from these devices to color the look of the film; scenes with Kayla typing on her iPhone, for instance, bathe her in harsh light that’s not particularly flattering, much like social media itself is often a distorted reflection of how we look. In the few moments that Kayla breaks away from her devices, the lighting reflects this change, and she’s shown to look much better than the harsh glow of her screens make her appear.

With the supporting cast, Burnham has assembled a group equal to Fisher; they all come across as naturally as she does, making her world look and feel more complete. Special mention must be made of Josh Hamilton as Kayla’s father, Mark, a single parent demonstrating infinite patience as he tries to make sense of his daughter’s secret world. Emily Robinson plays Olivia, a high school student who Kayla is paired with for a sneak preview of high school life, and who offers Kayla an unexpected friendship. As Kayla’s peers, Catherine Oliviere, Jake Ryan and Luke Prael are authentically age-appropriate and each nail their moments. Daniel Zolghadri has a small but crucial role, as one of Olivia’s friends, in an important scene that is by far the film’s tensest moment.

Eighth Grade is presented in its original theatrical aspect ratio of 1.85:1. Director Bo Burnham and cinematographer Andrew Wehde are clever in their use of lighting and framing, giving the film a visual design that is more thoughtful than expected. In scenes where Kayla is interacting primarily with screens, either glancing at her iPhone or using her laptop, they allow the harsher glow of the screen to drive the look. But in moments where Kayla is interacting with real people, especially in scenes with her father, the film takes on a warmer and more inviting look. These subtlety effective shifts are well-represented on the Blu-ray.

The film’s audio is presented in the lossless DTS-HD MA 5.1 format. As was the case with the visuals, the sound design is very effective, making clever use of the soundstage in ways that immerse us into Kayla’s world without feeling forced or gimmicky. In one early scene, the serenity of Kayla’s music from her ever-present headphones, engulfing us in the surrounds, is pierced by her father’s unwelcome questioning about her day; it’s a trick that’s been used a thousand times but is really well executed here. In a later scene, where Kayla is navigating her way through a swimming pool filled with more popular kids who don’t notice her, the sound of the water rustling through the surrounds places us there with Kayla. Again and again, the sound design puts us in Kayla’s shoes, allowing us to feel her experiences in all of their emotions.

Audio Commentary with Writer-Director Bo Burnham and Actress Elsie Fisher – Burnham and Fisher have a loose chat as they view the film. It’s clear that neither has prepared notes for the track, and while this kind of informal recording doesn’t always work, there’s something about Burnham and Fisher together that is endearing to listen to.

You’re Not Alone: Life In Eighth Grade (14:49, HD) – A brief but informative behind the scenes look with comments from Burnham, Fisher and the rest of the cast.

Deleted Scenes (11:55, HD) – Deleted moments from the film are presented together as a single piece; the disc does not present the option to select deleted scenes individually, nor does it add any context to the scenes. While the scenes play well on their own, they would have been redundant in the context of the finished film.

Digital Copy – A digital copy coupon is included which allows a single redemption at either Vudu or FandangoNow.

Eighth Grade is a wonderful film. Writer-director Bo Burnham handles the material with great sensitivity and honesty, and star Elsie Fisher is completely authentic in the lead role. Though it’s a smaller story, the visual and audio design is enormously effective at transporting the audience into the film’s world and to see it through the eyes of its unforgettable protagonist, Kayla. The Blu-ray release from Lionsgate does an outstanding job of representing the look of the film on disc. A charming audio commentary and an above average behind-the-scenes featurette add additional value, though the film’s re-watchability is the disc’s greatest appeal.

I have nothing to add except that I I agree with pretty much everything you said in your review.

I think this is one of the best movies of the year and I am really glad to have the disc.
Reactions: TravisR and Josh Steinberg

Filmed a mile from my house. Found that out by noticing a menu from a local restaurant on the refrigerator in her kitchen.
Reactions: Josh Steinberg

We are showing 'Eighth Grade' next weekend in the Booth Bijou Garage Theater. We saw the film at our favorite cineplex and, while I loved it, I was also just a tiny bit creeped out by it. Young Elsie Fisher does such an amazing job of portraying a struggling Eighth Grader, I found myself feeling like it was too real and offered too much of an inside view of a 13-year-old's personal life. It made me feel like a bit of a voyeur, seeing things that I shouldn't really be watching.

I am looking forward to discussing the film with our friends after they've seen it.

A great review! I didn’t buy this BD as I’m trying to limit my disc purchases because I’m running out of bookcases. Therefore, I decided to buy the 4K/Dolby Vision download from iTunes for $9.99. I watched it today and I must say it’s one of the best films I’ve seen this year as it really details the difficulties that shy, not so confident eighth graders go through in today’s social media world. They’re connected and disconnected at the same time with life and the realities of what they’re facing day to day. Without question, it was much easier to navigate eighth grade in my youth than it is today. Elsie Fisher was amazing as the protagonist. As she stated in one of the bonus features that it was easier for her to project her own experiences into her performance, since, she starred in this film that vary summer after graduating eighth grade herself.
Reactions: Josh Steinberg and Tino
You must log in or register to reply here. 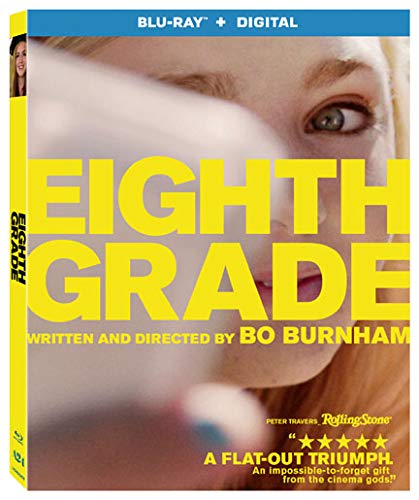