Forum List What's new Dark Style Change width
Log in Register
What's new Search
Menu
Log in
Register
Navigation
Install the app
More options
Dark Style
Close Menu
Posted on February 8, 2017 by Matt Hough
You are using an out of date browser. It may not display this or other websites correctly.
You should upgrade or use an alternative browser.
Outstanding teen dramedy dealing with the trials of adolescence rings true. 4 Stars

Kelly Fremon Craig’s The Edge of Seventeen is an angst-filled teen dramedy that’s darker in mood and tone than other popular movies that focus on the cloudy, mystifying time of adolescence.

Kelly Fremon Craig’s The Edge of Seventeen is an angst-filled teen dramedy that’s darker in mood and tone than other popular movies that focus on the cloudy, mystifying time of adolescence. It’s a sober and affecting look at a teen loner who feels no one else in the world is on her wavelength, sprinkled with enough dry wit and awkward, goofy rites of passage to keep things from ever getting too depressing and hopeless.

Nadine (Hailee Steinfeld) finds herself a junior in high school with but one friend from childhood, Krista (Haley Lu Richardson), and absolutely nothing else going for her. Her older brother Darian (Blake Jenner) is BMOC with piles of friends and adored by all, and her widowed mom (Kyra Sedgwick) is more interested in finding a man for herself than in trying to help Nadine sort out her own messy teen troubles (not that Nadine would let her even if she wanted to). When Krista and Darian fall for one another, Nadine’s worst nightmare comes true, and in demanding Krista make a choice, Krista naturally opts for love over a friendship with strings leaving Nadine now with no one in her corner. Of course, if she’d really open her eyes to the world instead of being so bottled up with her own emotions, she’d see that she does have people in her life who care: classmate Erwin (Hayden Szeto) and history teacher Mr. Bruner (Woody Harrelson) who allows her to berate and bully him while lending a patient ear to her many tales of woe.

Writer-director Kelly Fremon Craig certainly captures the angst of adolescence in all its selfish attention to “me” in her central character Nadine even if the writer in her can’t help but give Nadine too many lengthy monologues where she sputters on about her problems and torments to any available ear (to be fair, the monologues are beautifully written and filled with wit and snark in equal measure). Nadine is one of those characters you want to give a loving, affectionate hug of assurance to after you finish strangling her (at some point, every other major character in the piece has this same reaction to her), and we must watch helplessly as she makes mistake after mistake eventually hitting rock bottom before finally waking up to the truth: that the world is no more against her than anyone else but that she must work on her own shortcomings while embracing her strengths if she wants to get anywhere and achieve any kind of inner peace and contentment. Craig directs some wonderful moments: Nadine and Erwin’s sputtering camaraderie at a carnival and in his parents’ palatial heated swimming pool and later in his bedroom when she recognizes that he has real gifts she could be celebrating with him, a quasi-romantic encounter with her crush Nick Mossman (Alexander Calvert) that is equal parts funny and dire, and all of her conversations with Mr. Bruner, a man of few words but of necessity ones that need to be spoken.

While not quite a one-woman show for Hailee Steinfeld, it’s the nearest one could come to it in today’s cinematic climate, and she’s simply brilliant throughout: snarky, smart, sly, and troubled in equal measure. Blake Jenner has a real career high as her popular brother who has far more on his plate than Nadine has ever imagined. With the emphasis on the teen story, Kyra Sedgwick’s mother Mona is a bit underwritten, but the actress plays what she has with verve and sensitivity. Woody Harrelson has several wry, dry sequences as the understated Mr. Bruner. As Nadine’s two closest friends, Haley Lu Richardson’s Krista is quite appealing in her being caught between a rock and a hard place, and Hayden Szeto is a wonderful, caring boy pal who would like to be more if only Nadine would open her eyes. Alexander Calvert has all the right postures as the confused Nick, the object of Nadine’s sexual fantasies who, even when she can have what she wants, refuses to let herself go through with it, and Eric Keenleyside as Nadine’s doting father in the early scenes is all one could wish for in a dad.

The film’s 1.85:1 theatrical aspect ratio is faithfully rendered in this 1080p transfer using the AVC codec. Shot digitally, the movie generally looks sharp and detailed with only a few instances here and there where images don’t quite sparkle. Color is beautifully represented with accurate and appealing skin tones. Contrast has been consistently applied for an excellent picture, and black levels, especially in the pool sequence, are most impressive. The movie has been divided into 20 chapters.

The DTS-HD Master Audio 7.1 sound mix uses pop tunes and Atli Orvarsson’s background score as the most consistent source of the transfer’s surround sound elements. Dialogue has been well recorded and has been placed firmly in the center channel. Ambient sounds are used sporadically but well in the film’s extended soundstage.

Deleted Scenes (4:03, HD): three scenes can be watched together or individually.

A winning combination of comedy and drama covering a few pivotal weeks in the life of an angst-filled high school junior, The Edge of Seventeen makes a firm case for itself as a movie well worth seeing, and the outstanding video and audio quality of the Blu-ray release makes the possibility of a rental or purchase even more appealing.

Highly recommended! One of my favorites of 2016! We're showing it next week in the Booth Bijou Garage Theater.

Mark Booth said:
Highly recommended! One of my favorites of 2016! We're showing it next week in the Booth Bijou Garage Theater.

Same here! This film gets my highest recommendation.

Another ringing endorsement here. It seems like every third teen movie is touted as "Just like a John Hughes movie!" but this one actually achieves that.
You must log in or register to reply here. 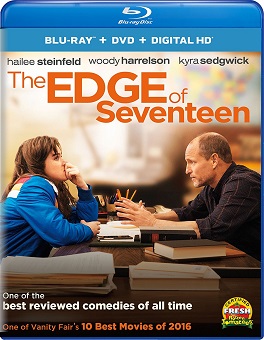