Forum List What's new Dark Style Change width
Log in Register
What's new Search
Menu
Log in
Register
Navigation
Install the app
More options
Dark Style
Close Menu
Posted on March 10, 2017 by Richard Gallagher
You are using an out of date browser. It may not display this or other websites correctly.
You should upgrade or use an alternative browser.
Entertaining thriller with some spectacular scenes 4 Stars

Edge of Eternity is an above-average thriller which features spectacular CinemaScope views of the Grand Canyon and an exciting climax. It is now available on Blu-ray from Twilight Time with an excellent transfer from Sony.

In northern Arizona a well-dressed man drives a beat-up sedan on a dirt road adjacent to the Grand Canyon. He pulls over and walks to the canyon rim with a pair of binoculars. He is unaware of the fact that he is being watched by a man who has been hiding behind some rocks. The latter man emerges from his hiding place, releases the sedan’s emergency brake, and pushes the car toward the unsuspecting man who is gazing out across the canyon. The intended victim manages to jump aside just in time. The car plunges over the rim and a fight ensues. The attacker comes out on the short end of the fight by falling to his death, and the roughed up survivor staggers away on foot.

Thus begins Edge of Eternity, a solid thriller from director Don Siegel (Invasion of the Body Snatchers, Dirty Harry). Shortly after the fight Deputy Sheriff Les Martin (Cornel Wilde) is patrolling the area in his police cruiser when he encounters a grizzled former gold miner, Eli Jones (Tom Fadden). Eli lives in a cabin at the idle Kendon gold mine, where he maintains the grounds and generally keeps an eye on things. Eli is something of an eccentric who is given to tall tales, so when he tells Les about a stranger at his cabin the deputy dismisses it as another of Eli’s fantasies. Just then a speeding Ford Thunderbird convertible flies by and Les sets off in pursuit, leaving the frustrated Eli behind.

Following an exciting high speed chase down a wicked dirt road with hairpin turns, Les writes up a traffic ticket for the attractive but reckless female driver. She is Janice Kendon (Victoria Shaw), the daughter of the gold mine’s owner. She is obviously attracted to the handsome deputy, and he in turn is hardly blind to her charms. Les is a lawman who left his previous job as detective in Denver under a cloud, and Janice is an educated and adventurous woman who wistfully reminisces about the days when her home town was thriving. Meanwhile Eli returns to his cabin and finds that the stranger who visited him is now hanging by a noose with his hands tied behind his back. When Sheriff Edwards (Edgar Buchanan) arrives, he discovers that the stranger carried no identification and even the labels from his suit and shirt are missing.

The once-booming mining town outside of Kingman is now nearly a ghost town. The price of gold in the United States was frozen at $35/ounce in 1934, and the increased costs of mining in 1959 made it economically unfeasible to keep the Kendon mine open. The only business of note is a saloon owned by Scotty O’Brien (Mickey Shaughnessy), where the local men come to drown their sorrows. When a third man turns up dead, the local District Attorney berates Sheriff Edwards and Deputy Martin, who have been unable to even identify the dead stranger, much less develop a motive or a suspect.

Cornel Wilde and Victoria Shaw are adequate in their roles, although the romantic sub-plot fails to create any real sparks. Mickey Shaughnessy is effective as bartender Scotty, and Edgar Buchanan is his usual avuncular self as the sheriff. Jack Elam and Dabs Greer have small roles, and Don Siegel makes a Hitchcock-like appearance as a man by the pool at the El Trovatore Motel (which is still in business, by the way) on Route 66. The script, by Marion Hargrove (writing under the pseudonym “Kurt Swenson”) and Richard Collins, is a bit unfair as murder mysteries go because it provides essentially no hints about who is behind the killings until the perpetrator is unmasked. However, the real star of Edge of Eternity is the fabulous location camerawork in and near the Grand Canyon. There are breathtaking scenes of a small seaplane flying through the canyon and landing in the Colorado River, and the final scene on a real tram across the canyon is worthy of repeated viewings. Other scenes were filmed on location in Kingman and the old mining town of Oatman.  Incidentally, the business about mining bat guano (look it up) is authentic!

The CinemaScope image is properly framed at 2.35:1 and is delivered in 1080p via the AVC codec. The picture is sharp and clean, with accurate colors (even though it was filmed is the frequently problematical Eastman Color), good contrast, strong black levels and fine shadow detail. Film grain has been retained to maintain a pleasing, film-like experience.

The spectacular cinematography by Burnett Guffey (All the King’s Men, From Here to Eternity, Bonnie and Clyde) includes some amazing aerial photography

The DTS HD-MA 1.0 mono soundtrack is in excellent shape. Every word of dialog is clear and understandable, and the music by the prolific Daniele Amfitheatrof is free of distortion.

The limited extras on the Blu-ray disc include a commentary track by film historians Nick Redman and C. Courtney Joyner, and the isolated music track.

It is too bad that no “making of” featurette exists, because I would love to see how the astonishing stunts in the climactic scene were done.

Edge of Eternity is an underrated thriller which should please anyone with a decent home theater setup. However, viewers who have a fear of heights may find some of the scenes to be difficult to take!

This Blu-ray has been released in a limited edition of 3,000 units, so readers who are interested in purchasing it should go the Twilight Time website or the Screen Archives website to verify that it is still available.

Great review Richard...I'm looking forward to seeing TT's Edge of Eternity...I haven't seen it since I was a kid, but it sounds like it has the virtue of some spectacular Grande Canyon vistas and some great stunts also...Don Siegel knew how to do action movies, of course...I admire Cornel Wilde for his solid if unremarkable studio picture work, Leave Her to Heaven, Road House, etc... but especially so for his independent producer and directing work in the later films The Naked Prey and Beach Red...acting in these films also...

Saw EDGE OF ETERNITY on a double bill with THE MOUSE THAT ROARED in 1959 when I was 9 years old and thought it was the coolest movie I had ever seen. My order is in and I can't wait to re-visit this.

There is a scene in EDGE OF ETERNITY where a character, (Tom Fadden), hums the Dragnet theme, (Dum..De..Dum..Dum). The last time I saw EDGE on TV the Dragnet bit was replaced with the Beethoven 'V' For Victory, (Dit..Dot..Dot..Da). Has the Dragnet bit been restored to this release?
Last edited: Mar 11, 2017

Watched the blu-ray for the first time today. Good image and commentary. One of lovely Victoria Shaw's few films.

I picked this up as a blind buy shortly after it’s release and I enjoyed it immensely. I’m out of town on vacation at the moment but I’ve been thinking about revisiting it for a while; thanks for the thread bump reminder, I think I’ll make this a priority when I get home!

I'm enjoying a rewatch of this trip back in time on this fine TT blu-ray.
You must log in or register to reply here. 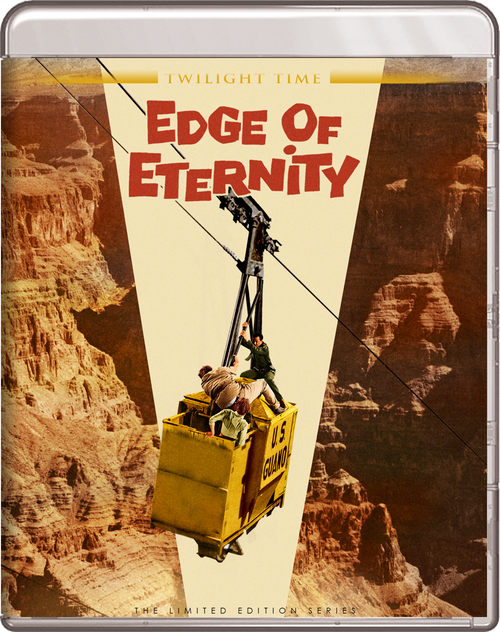