Following the success of Airport (1970) at the box office, Universal Studios quickly looked to cash in on the trend of disaster pictures they helped usher in. However, the success of Irwin Allen’s The Poseidon Adventure (1972) forced the studio to step up their game; the result, Earthquake, offered up a Grand Hotel style cast with innovations in technological and special effects. Previously released by Universal on both DVD and Blu-ray, Shout Factory has licensed the film for their Shout Select line and given it a two disc “Collector’s Edition”.

The city of Los Angeles is home to millions of people but we bear witness to the lives of a handful of its citizens. Successful engineer Stewart Graff (Charlton Heston) finds solace from his troubled marriage to the possessive Remy (Ava Gardner) with Denise Marshall (Genevieve Bujold), the widow of Stewart’s deceased friend; Remy tries to save the marriage by manipulating her father Sam (Lorne Greene) into offering Stewart the company presidency. LAPD officer Lew Slade (George Kennedy) is facing a personal crossroads after being suspended for decking an obtuse colleague following a high speed chase; daredevil motorcyclist Miles Quade (Richard Roundtree) is hoping for his big break when a casino in Las Vegas shows interest in his act. Their lives come to a screeching halt when a 9.9 earthquake strikes the city and rains down death and destruction; now they have to pick up the pieces and try to survive the now devastated City of Angels…

Coming in at the height of the disaster genre craze, Earthquake does succeed as a decent entertainment that’s overshadowed by the technical achievements. The big pluses here are the innovations in special effects and sound – Sensurround was created to replicate the immersive feeling of an actual earthquake – that give the impression of an actual disaster happening; they deservedly earned the film’s 2 Oscar wins for Sound and a Special Achievement Award for the visual effects. Technical achievements aside, the film’s critical problem lies with the script; some scenes were cut out prior to the movie’s release, leaving holes in the stories of a few of the characters – for example, we know that Stewart and Remy aren’t very happy with each other but we never know the reason for the tensions in the marriage other than Stewart’s affair. Another complaint with it seems to lie in the pacing and dialogue; it takes until nearly the halfway point in the movie before we finally get to “the big one” that devastates Los Angeles. In short, director Mark Robson does a good job with the material, but a few flaws in the story keep it from reaching the upper echelons of the genre, as represented by Irwin Allen’s productions of The Poseidon Adventure and The Towering Inferno; it’s still entertaining enough, though.

Charlton Heston is his usual stiff-jawed self as Stewart; he would also appear in three more disaster themed movies for Universal: Airport 1975 (released the same year as this movie), Two-Minute Warning (1976), and Gray Lady Down (1978). Ava Gardner is glamorously bitchy as Stewart’s manipulative wife, but there’s just no way Gardner is convincing as Lorne Greene’s daughter (sorry, I just had to say it). Greene (as Stewart’s powerful father-in-law) and George Kennedy (as the rogue officer with a great speech before the police captain) come off best here out of the ensemble cast; Richard Roundtree is solid as the stunt driver aspiring to be the next Evel Knievel. Also worth mentioning are Genevieve Bujold as Stewart’s love interest, Barry Sullivan as the head of the California Seismological Institute, Marjoe Gortner as a perverted National Guardsman, Lloyd Nolan as a doctor, Victoria Principal as the sister of the stunt driver’s partner, Monica Lewis as Mr. Royce’s secretary, Gabriel Dell as the partner of the ambitious stunt driver, John Randolph as the mayor of Los Angeles, Donald Moffat and Kip Niven as Sullivan’s colleagues at the Institute (the latter making the bold prediction about “The Big One”), George Murdock as a National Guard colonel, an uncredited Lonny Chapman as the police chief who suspends Slade, and Walter Matthau (billed as Walter Matuschanskayasky – which lead to the urban legend that this was his birth name) as a drunk.

The film’s 2:35:1 aspect ratio is preserved in this brand new HD transfer taken from a 2K scan of the film’s interpositive. The film opens with the Sensurrond bumper, unseen on previous home video editions and since its initial theatrical release. Film grain is organic throughout, with fine details rendered faithfully and a strong color palette. Minimal instances of age related artifacts and issues are present but not enough to distract from viewing; overall, this is likely the best the film has ever looked on home video.

There are three options for this release: a 5.1 DTS-HD Master Audio track (the default option; likely carried over from Universal’s previous Blu-ray release), a 2.1 DTS-HD Master Audio track (which closely replicates the original Sensurround track), and a 2.0 DTS-HD Master Audio track. All three tracks showcase strong dialogue and sound effects to go with great fidelity and ambiance to John Williams’ score; of the three, the 5.1 track has the best overall quality while the 2.1 is the most faithful to the original sound mix and the most effective with the Sensurround sound effects. Either way, all three represent the best the movie has ever sounded on home video.

Vintage Audio Interviews with Charlton Heston (3:48), Lorne Greene (5:08), and Richard Roundtree (4:02) – Three of the film’s stars share their thoughts on the movie as well as a few interesting anecdotes in these interviews taken from around the film’s release.

The TV Cut (152 minutes) – Presented in its original 1:33:1 aspect ratio and in a mono DTS-HD Master Audio track, the original TV broadcast of the movie from 1976 with additional scenes filmed exclusively for this version and the original cliffhanger ending for Part 1 of the two night broadcast; the transfer comes from a 2K reconstruction of the original elements, but not all of the TV scenes are present here because of print damage (scroll down for more details) – the additional scenes can also be viewed separately.

Sounds of Disaster: Ben Burtt Talks About Sensurround (11:19) – The famed sound engineer looks at the creation of the Sensurround trend and its lasting impact in this new featurette.

Scoring Disaster: The Music of Earthquake (16:42) – Film historian Jon Burlingame examines the John Williams score as well as some of the themes in this new interview.

Painting Disaster: The Matte Art of Albert Whitlock (10:36) – Cameraman Bill Taylor goes over the work of the famed matte painter did for the movie, as well as a few personal memories of him, in this brand new featurette.

Additional TV Scenes (2) (8:54) – Due to the condition of elements, two scenes from the TV version couldn’t be rejoined to the movie; they are presented here separately in standard definition.

Earthquake has lived on as not only a star-studded entertainment vehicle, but also an innovative film that broke new ground in sound design. Shout Factory has easily surpassed previous home video editions with a great brand new transfer, great audio tracks (including the original Sensurround track), and a solid offering of special features including the TV version of the movie. An easy upgrade for fans of the film and the disaster genre in general. 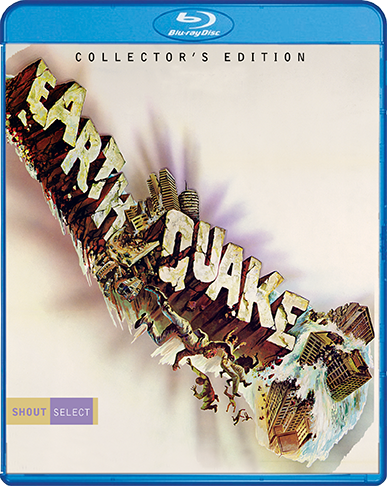