Two cult favorites from the 1980s make their way to Blu-ray, The Dungeonmaster (aka Ragewar) and Eliminators in a nostalgic drive-in double feature courtesy of Scream Factory.

Charles Band’s Empire Pictures was a short-lived mini-studio that produced and released genre pictures, focusing mainly on fantasy and horror in the mid 1980s. Two of the studio’s films that gained a cult following from their airings on cable are available as a double feature on Blu-ray from Scream Factory.

The Dungeonmaster, also known as Ragewar in international territories, stars Jeffrey Bryon as Paul, a computer technician who has created a quasi-sentient computer he has called X-CaliBR8 (or Cal for short) that he interacts with via an interface embedded in his eyeglasses. His girlfriend, Gwen (Leslie Wing), is jealous of all the attention Paul gives to Cal, wanting something more out their relationship. One night, they are transported in their sleep to the lair of Mestema (Richard Moll), who tells Paul he must defeat all seven challenges he will be sending him on in order to both live and get Gwen back. Each challenge was helmed by a different director, giving the film an uneven quality and pacing. The most memorable challenge has Paul battling the heavy metal band WASP, directed by studio head Charles Band. Paul also has to battle an ugly rat-like creature and his minions, a Ray Harryhausen-inspired statue of stone, and the world’s worst murderers (including Jack the Ripper and Genghis Khan) as they are defrosted. The version included on this disc is the international and unrated Ragewar.

The second film on the bill, Eliminators, fares much better. A former pilot known only as The Mandroid (Patrick Reynolds) is about to be dismantled by Abbott Reeves (Roy Dotrice), his creator, but the creator’s assistant helps him escape, telling him to seek out fellow scientist Col. Nora Hunter (Denise Crosby), who is the only one who can help defeat Reeves and his evil scheme. The Mandroid and Hunter head down to South America, along with her pet robot SPOT (which looks like a leftover prototype from The Black Hole). They meet up with riverboat captain Harry Fontana (Andrew Prine), who leads them downriver as they uncover clues, battle cavemen, meet a ninja, and try to stop Reeves, who has turned himself into a Mandroid, from time travelling to Ancient Rome and becoming Caesar. Eliminators is just as silly as it sounds, but it never takes itself too seriously. Prine has some great lines and provides much of the film’s humor.

Time has not been too kind to these films, and these transfers definitely show it. Both films have been framed at 1.78:1 and compressed using the AVC codec. The Dungeonmaster starts out overly soft, almost as if it were filmed in 16mm and taken from a second generation dupe. Once the title sequence is over, things fare much better with a fairly stable and sharper image with acceptable black levels and consistent and well-saturated colors. Eliminators is fairly consistent throughout, with well-saturated colors, decent black levels, but sporting a slightly soft image overall. Both films do suffer from some occasional dirt and minor scratches here and there, nothing that isn’t overly distracting.

The Dungeonmaster sports a DTS-HD Master Audio 2.0 mono soundtrack that does its job and nothing more. Dialogue is clear and never drowned out by Richard Band’s score or sound effects. Eliminators get a DTS-HD Master Audio 2.0 stereo track that adds a small amount of dimensionality with some occasional surround activity. Dialogue is directed mostly to the center channel, and remains clear throughout, never getting lost in the sound effects or score.

Interview with Director Peter Manoogian (1080p; 32:30): The director discusses his career and working at Empire and with Charles Band. The interview suffers from the use of the camera’s built-in microphone.

Fans of 1980s genre fantasy adventures will get a kick out of this double feature from Scream Factory. Image and sound quality are good but not great, and somewhat disappointing is the lack of at least a trailer for Eliminators. 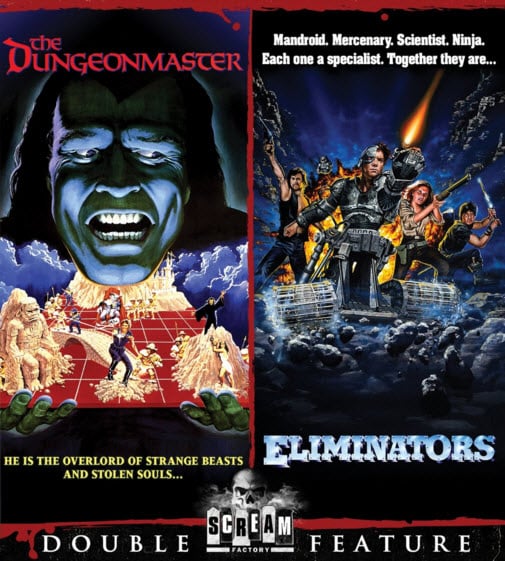