Tim Burton’s live-action re-imagining of the Disney animated classic Dumbo arrives on 4K UHD Blu-ray with a nice presentation, but was this remake really necessary?

After the surprising success of live-action remakes of Cinderella, Beauty and the Beast, and the Sleeping Beauty prequel Maleficent, Disney is busy fast-tracking similar big-budget treatments of many of its animated classics, possibly proving that Hollywood is running out of ideas. Tim Burton’s Dumbo is a politically-correct re-imagining of the tale of a flying elephant that reunites the director’s Batman Returns co-stars Danny DeVito and Michael Keaton. Taking place in post-WWI America, war veteran Holt Farrier (Colin Farrell), who lost an arm in the war, returns to Medici Bros. Circus to reunite with his family, only to find his two children (Nico Parker, Finley Hobbins) living as orphans under the care of Max Medici (DeVito) after losing their mother in a flu epidemic. Having sold Farrier’s horses to make ends meet, Medici places him in charge of caring for the elephants, particularly his latest acquisition, a very pregnant Mrs. Jumbo. She gives birth to a baby boy with enormous ears named Jumbo, Jr., whom Farrier’s children have taken a liking to. When the public and Medici’s abusive trainer mock Jumbo, Jr. during his debut performance, his mother goes on a rampage, destroying the tent and killing the trainer, forcing Medici to sell Mrs. Jumbo and placing Jumbo, Jr., now renamed Dumbo, as part of the clown act. Saddened by the loss of his mother, Ferrier’s children try to cheer up Dumbo, onlyto find he has an extraordinary talent – he can fly. This quickly gets the attention of theme park owner V.A. Vandevere (Keaton), who buys out Medici Bros. Circus and makes Max a silent partner while trying to create a new act with his star acrobat Colette (Eva Green) riding Dumbo under the Big Top, and eventually dispatching Medici and his cast of performers once the act is perfected.

This live-action re-imagining follows the 1941 animated classic rather loosely, telling the story more from the children’s point of view, but also trying to be more politically correct than its predecessor. The pink elephant sequence is re-enacted, but as a bubble presentation before Dumbo’s debut at Dreamland rather than a drunken dream sequence, and the movie jettisons the When I See an Elephant Fly music sequence entirely. It does incorporate the song Baby Mine, though, in several sequences. The Vandevere plot is new to this telling of the story, and is possibly the most Burton-esque part of the movie. The overall story of Dumbo is certainly right up Tim Burton’s alley, but the film lacks the magic of the 1941 classic, often dragging in spots while doling out the Vandevere plotline. The performances are first rate, as are the visual effects, but the movie is plodding and dull.

Dumbo was captured at 5.1K and 3.4K resolution on Arri Alexa 65, Mini, and XT cameras, and then completed as a 2K digital intermediate with Dolby Vision high dynamic range for its premium theatrical engagements. Disney’s 4K UHD Blu-ray release presents the movie in an upscaled 2160p HEVC-encoded transfer with HDR10 high dynamic range, retaining the film’s 1.85:1 theatrical aspect ratio. There is a slight improvement in detail, color gamut, and contrast, but nothing to get overly excited about when compared to the Blu-ray release (which is included in the package). The biggest improvement is in black levels, allowing for a darker picture overall that still retains a great amount of detail.

Many will likely find the Dolby Atmos mix included on the 4K UHD Blu-ray release a disappointment. Like earlier Disney UHD releases, this was mixed at much lower reference volume than most, and it is said to see Disney returning to underwhelming Atmos mixes on their UHD releases. Even with the volume adjusted, there still is not much going on in the heights other than some minor music extension and subtle rustling sounds of the circus tent. LFE is almost non-existent, so much so that I actually had to get up and make sure the subwoofer had turned itself on (it was powered up). Surround activity is quite good, while dialogue is clear and understandable throughout. As a side note the DTS-HD MA 7.1 track found on the included Blu-ray is also rather anemic in the LFE department.

All of the special features can be found on the included Blu-ray edition of the film and on select digital retailers.

Circus Spectaculars (1080p; 8:20): The cast and crew discuss the characters, story, and their love for the original film.

Easter Eggs on Parade (1080p; 3:52): An all-too-brief rundown of the many references to the original movie.

Tim Burton’s politically-correct live action re-imagining of Dumbo pales in comparison to the 1941 animated classic. Although the video presentation earns a slight edge over the Blu-ray, the audio presentation on both discs is rather underwhelming. 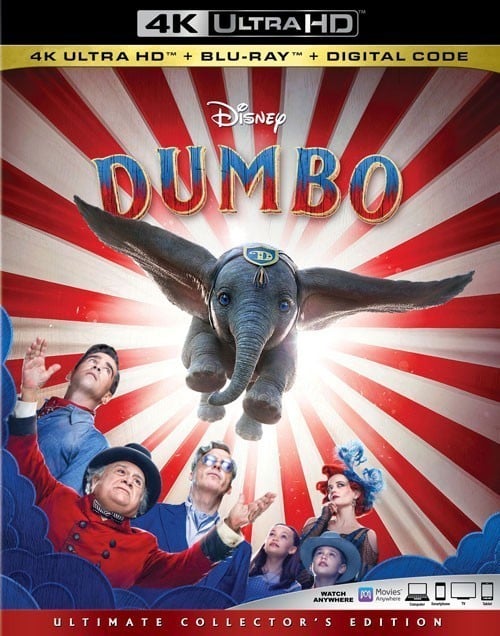