DreamWorks Animation has been bringing many of their big screen characters to the small screen in Christmas-themed television specials since the release of Shrek 2, and with one exception, all of those specials brought back much of the movie’s original cast and maintained the animation quality of the feature film is was spun off from.

Trolls Holiday picks up where the movie Trolls left off, as Poppy (Anna Kendrick), the Queen of the Trolls, discovers that the Bergens do not have any holidays they can claim as their own, enlisting her friends Branch (Justin Timberlake), Biggie (James Corden), Guy Diamond (Kunal Nayyar), Cooper (Ron Fuches), Satin (Aino Jawo), and Chenille (Caroline Hjelt) visit Queen Bridget (Zooey Deschanel) to try and help bring holidays to the Bergens. The short follows the style and formula of the feature film, blending in pop songs with the storytelling along with its many one-liners. It is beautifully and colorfully animated, as was Trolls, and is fun to watch, but ultimately forgettable.

Shrek the Halls is a continuation from Shrek 2, and was the animation studio’s first Christmas special. It brings back the principal voice actors Mike Meyers (Shrek), Eddie Murphy (Donkey), Cameron Diaz (Fiona), and Antonio Banderas (Puss in Boots), as Shrek learns how to celebrate the first Christmas with his family. I’ve always enjoyed this special, combining the frantic and sometimes questionable (for a family special) humor with pop holiday songs.

Donkey’s Caroling Christmas-tacular is an 8 minute short that first appeared as a special feature on the Blu-ray release of Shrek Forever After. It’s nothing more than a medley of Christmas songs sung by various characters, hosted by Donkey. It’s a fun short, although it can be annoying for some.

Merry Madagascar has the crew from Madagascar accidentally shooting down Santa Claus, who gets amnesia, and the crew now has to get Santa back in the air to deliver his presents and, hopefully, return Alex (Ben Stiller) and his friends back to the Central Park Zoo in New York. It’s a zany adventure, much like the Madagascar movies.

The Madagascar Penguins in A Christmas Caper is an 11 minute short that was first shown in theaters with Wallace & Gromit in The Curse of the Were-Rabbit. Taking place prior to the first Madagascar movie, Private Penguin leaves the zoo in search of a Christmas present for Ted the polar bear, only to be captured and thought to be a dog’s chew toy by Nana, a mean old lady featured in the original film. It’s Skipper, Kowalski, and Rico to the rescue in this Looney Tunes-inspired short.

Dragons: Gift of the Night Fury is one of my two all-time favorite modern-day TV specials in this set. Written by Adam F. Goldberg (creator of ABC’s The Goldberg’s), the village of Berk finds all of its dragons have gone missing as they prepare for their winter holiday of Snoggletog. Well, all of the dragons except Toothless, who can’t fly without Hiccup (Jay Baruchel) to help him steer. Hiccup and his crew soon learn the dragons’ secret. This holiday special stays true to the movie trilogy’s canon.

Kung Fu Panda Holiday is another heartwarming holiday story following the events from the first movie. Po (Jack Black), being the Dragon Warrior, must now host the annual winter holiday feast for the other Kung Fu Masters, and becomes frustrated with choosing a chef to cater the party, especially since the dinner falls on the same night as his father Ping’s (James Hong) annual dinner party. It’s a tale of loyalty and family, and brings back the Furious Five (voiced by Angeina Jolie, Jackie Chan, Seth Rogen, Lucy Liu, and David Cross) and their master, Shifu (Dustin Hoffman). This is the second of my all-time favorite modern-day Christmas TV specials included in this set.

Home: For the Holidays is the lone holiday special in this set that, technically, is a spin-off from the Netflix series Home: Adventures with Tip & Oh rather than the feature film Home, using the same voice actors and more traditional hand-drawn animation style of the series. It is also the longest of the TV specials at 45 minutes. Tip (Rachel Crow) and alien Oh (Mark Whitten) celebrate their first Christmas. I found the special to be a chore to get through, with the interactions between Tip and Oh especially annoying (in the movie, they were much less annoying, mostly from the casting of Jim Parsons as Oh and Rhianna as Tip).

Rise of the Guardians is also included on a second disc, the full feature film from 2012, and is the same disc from 2013 (it includes start-up trailers for The Croods and Dragons: Riders of Berk plus a “sneak peak” trailer for Turbo). When Pitch (Jude Law) threatens to take over the world, it is up to the Immortal Guardians – Jack Frost (Chris Pine), North (Alec Baldwin), Tooth (Isla Fisher), Bunny (Hugh Jackman) and the silent Sandy – to join forces to protect the dreams and imaginations of children around the globe. Rise of the Guardians was the last film from DreamWorks Animation to be released theatrically by Paramount, and possibly for that reason it really didn’t get the promotional push that many of the studio’s other films did under that partnership. While not exactly a classic, it is a rather delightful holiday-themed movie with good animation and a talented voice cast.

Many of the TV specials have been released previously on DVD and/or Blu-ray, either individually or as part of a collection, with Home: For the Holidays making its physical media debut in this set. Picture quality is pretty much the same across all of the shorts and features, with well-defined detail, bold and vivid colors, and deep blacks.

Disc One, which contains all of the shorts and specials, includes a lone DTS-HD Master Audio 5.1 track that presents a much wider dynamic range than found on Netflix (where most of this content has been easily available year-round). Although most were made for television (or streaming in the case of Home), these are still relatively active surround mixes with a nice wide front soundstage.

Disc Two, which contains the feature Rise of the Guardians, has been fitted with a Dolby TrueHD 7.1 track that delivers the goods in spades. LFE presence is strong but never overly boomy, with a wide front soundstage and active surrounds that do a very good job at immersing the viewer into the movie’s environment.

Learn How to Draw (1080p; 9:47): Animators show you how to draw A Baby Gronkle and Wo Hop Scared Shrekless.

Rise of the Guardians:
The extras on this disc are broken down into three categories.

Blu-ray Exclusives
Jack Frost Snowball Showdown!: An interactive game where the player is Jack Frost and has 30 seconds to throw snowballs and hit as many targets as possible.

The Man Behind the Guardians (1080p; 6:25): Author William Joyce discusses how he came up with the source material for the movie.

Filmmaker’s Commentary: Director Peter Ramsey is joined by Producers Christina Steinberg and Nancy Bernstein on this informative track on the making of the movie.

There is a lot more good than bad in DreamWorks Ultimate Holiday Collection, a 2-disc set of holiday specials plus the feature film Rise of the Guardians. 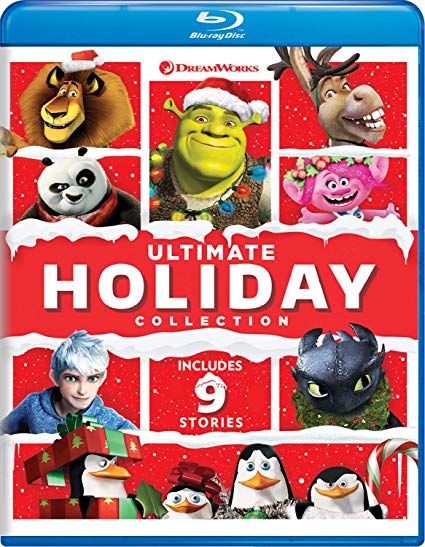