Forum List What's new Dark Style Change width
Log in Register
What's new Search
Menu
Log in
Register
Navigation
Install the app
More options
Dark Style
Close Menu
Posted on October 29, 2017 by Neil Middlemiss
You are using an out of date browser. It may not display this or other websites correctly.
You should upgrade or use an alternative browser.
Highly entertianing period musical still delivers 4 Stars

10 years after it was the talk of the town, Dreamgirls remains a delightfully well-crafted film filled with rousing musical numbers and a fascinating journey through the lives of newcomer artists and established acts at a challenging time in America. Jennifer Hudson is a revelation in her role as Effie, and deservedly won the Academy Award for Best Supporting Actress, and she’s surrounded by an outstanding cast who light up the screen.

Based on the 1981 Broadway production of the same name, Dreamgirls follows three exceptionally talented singers as they rise to fame under the tight reigns of their single minded and ambitious talent manager. This film explores the loves, losses and lessons that each of them experience on their journey as they climb from being a group of unknowns, to back-up singers for the singing sensation James ‘Thunder” early, and eventually to gaining the spotlight for themselves as the Dreams.

Bringing this adaptation of the Tony Award winning show to the big screen is Bill Condon (based on his screenplay of the stage musical book written by Tom Eyen). Condon is no stranger to film musicals, having provided the Oscar nominated screenplay for 2003’s Chicago. But now, in the Director’s chair, he provides a strong sense of time and place, and an excellent focus on character. Fluidly directing his characters and seamlessly covering events, spanning hours and years, to build a vivid sense of the 60’s & 70’s. All while without relying upon the more familiar images that help evoke those decades.

Condon assembles an impressive cast. From the leading actors and actresses, to the supporting cast and even the peripheral characters and cameo’s, everyone involved contributes a significant and earnest demonstration of their craft helping rightfully earn the many award nominations and wins (including Jennifer Hudson’s Best Performance by an Actress in a Supporting Role as Effie).

Portraying the music phenomenon, The Dreams (said to be loosely based on Diana Ross and the Supremes) are Beyoncé Knowles as Deena, Anika Noni Rose as Lorell and newcomer at the time, Jennifer Hudson. Bringing these girls to life required, in addition to acting talents, the vocal capabilities that ably deliver quieter songs with the fragile sensibility needed, as well as the raw and emotional power of some of the stronger numbers. Fortunately, each performer delivers.

In her best film performance to date, Pop/R&B superstar Beyoncé is very good as the Dreams’ lead singer. From her first appearance onscreen, it is obvious she knows just how powerful the film she is in will be, and even though the strength of her earlier scenes fades a little as the film progresses, there is no denying this chart sensation can be capable holding her own onscreen when the material is good. Anika Noni Rose, a veteran of the theatre, infuses her character (Lorell) with just the right balance of giddy ignorance and heartfelt devotion throughout the film and is a delight to watch. But the breakthrough performance comes from Jennifer Hudson in her debut film role. The fire, passion and searing emotion she pours into her character, especially when performing the film’s most potent song, ‘And I Am Telling You I’m Not Going’ is simply outstanding. (Note, the song “And I Am Telling You…” was made popular by the singer Jennifer Holiday from the Broadway production of Dreamgirls, for which she won the Tony award for Best Actress (Musical).

Jamie Foxx delivers a simmering performance as the likeable and by turns unlikable Curtis Taylor Jr., the trio’s demanding and controlling talent manager. Another superb performance is provided by Eddie Murphy as James ‘Thunder’ Early, a gruff, suave and wily singer with whom the girls get their break singing back up. Performing the songs himself, Murphy shines with glee and provides most of the films best, funny and tragic moments in the outrageous delivery of ‘Jimmy’s Rap.’  Rounding out the cast is Keith Robinson as Effie’s brother, Sharon Leal as Michelle (Effie’s replacement in The Dreams) and Danny Glover as Thunder’s once manager, Marty Madison.

Including songs from the original Broadway production and new songs written for the film, Dreamgirls is well crafted, with award worthy performances and inventive and sincere direction. While the story is straightforward, with no real surprises, it is littered with standout musical performances, including the rousing ‘Listen’ by Beyoncé. It also provides a historical perspective to the struggles and uphill battles that African American performers faced during those decades that went beyond the typical cutthroat nature of the entertainment industry.

Dreamgirls looks spectacular on this Blu-ray. While the only previous edition I have of this is the HD-DVD release (which this release surpasses), I can say that the color saturation is beautiful throughout. Bursts of color, with washes of blue, aquamarine, and orange in just the first ten minutes alone, help create the world we inhabit for over two hours courtesy of cinematographer Tobias A. Schliessler.

Paramount loads this edition of Dreamgirls with a DTS: X audio track (and when selecting, gives tips on how to best experience it), but will down mix properly for 7.1 or 5.1 enabled set ups. A dynamic, active mix that takes full advantage of its update. The many musical number are fully involving, with crisp clarity and warmth and crispness in the instrumentation.

The opening sequence in particular is a terrific example of how excellent the audio is – with terrific use of the surrounds, well-placed sounds that pull the viewer all the way in. A real treat.

This is where this release really disappoints. The collection of special features from the ‘Showstopper’ edition are gone. What we have, besides both the theatrical and extended editions on the Blu-ray (via branching) are a small collection of Jennifer Hudson’s auditions (which she nails), and a screen test of her “And I Am Telling You…” number. That means all the great features, including the insightful documentary “Building the Dream” are nowhere to be found. Which seems to indicate this release would be a supplement, rather than a replacement, for fans who purchased earlier versions.

Ultraviolet/Digital copy of the film

I saw Dreamgirls in the theater on opening weekend (a 10 p.m. Friday night showing if I’m not mistaken) and enjoyed it thoroughly. This Director’s Extended Edition doesn’t add any major, revelatory moments or scenes, but rather gives scenes little more breathing room here and there, more music (“Effie, Sing My Song”) and some bits and pieces previously trimmed (that are hard for someone not intimately familiar with the previous version to recognize). The extra minutes don’t hurt pacing, but were clearly moments director Condon is appreciative to have included for audiences to discover now.

The film is just as entertaining as it was that opening weekend, and I think fans of the film will enjoy having those few extra minutes.

You get an extras disc if you purchase it at Target. I stood in line with my wife who was purchasing two laundry detergents. This gave her a $5 Target card as a bonus which I applied to Dream Girls. Final cost $9.99.

TJPC said:
You get an extras disc if you purchase it at Target. I stood in line with my wife who was purchasing two laundry detergents. This gave her a $5 Target card as a bonus which I applied to Dream Girls. Final cost $9.99.
Click to expand...

What is on the extra disc?
D

Location
The "Where Are They Now?" File

The extra disc is the same Disc 2 that was included in the earlier 2-Disc Showstopper Edition.

It contains the following:

Unfortunately, Target only saw fit to include the extra disc in a paper sleeve, rather than designing their own packaging to accommodate its inclusion. I've swapped things out so that I keep the extras disc in the case and the DVD (which I'll never use) in the sleeve, but it's still an annoyance.

I did exactly the same thing. For any standard disc I replace with a DVD, I usually take the DVD copy I already own, put that in a paper sleeve and store it in the Blu ray case. I recycle the DVD case to use with the DVDs I make from TV. I have to shred the paper insert immediately before I get sentimental and change my mind!
You must log in or register to reply here. 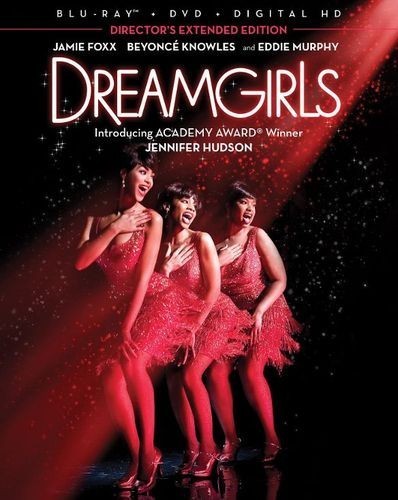