As a comedy, Dreamboat is just OK with the plot and its subplot following pretty much the expected outcomes, but it really had the chance to be something more had the director gone for something a bit less pat and a little more adventurous.

After Clifton Webb became a major film star, 20th Century Fox had seemingly few problems finding leading roles for their senior curmudgeon. Just put the acerbic, above-it-all persona into a situation where he can put everyone else in his or her place, and audiences were going to get exactly what they came for with one of his pictures. Claude Binyon’s Dreamboat certainly follows that formula to the letter though, to be fair, the film does try to shoehorn in some satirically caustic jabs at the then-new novelty television while also pointing out some of the exaggerated nonsense rampant in the movie business during the silent days. As a comedy, Dreamboat is just OK with the plot and its subplot following pretty much the expected outcomes, but it really had the chance to be something more had the director gone for something a bit less pat and a little more adventurous.

Respected but somewhat stuffy college instructor Thornton Sayre (Clifton Webb) is horrified when silent movies he made as a young man under the screen name Bruce Blair begin appearing on television hosted by his former leading lady (Ginger Rogers). The college board of trustees, fearful of a stain on their school’s reputation, is ready to fire him then and there, but Sayre convinces them he’ll take out a restraining order to have the broadcasts stopped. While he and his daughter Carol (Anne Francis) are working on the legalities in New York City, Sayre finds that his notoriety has rekindled interest in the industry in his acting career, and though he isn’t interested in leaving the world of academia, his co-star Gloria and her agent Sam Levitt (Fred Clark) would do anything to keep the gravy train going and initiate a series of schemes to delay his legal activities. Meanwhile, daughter Carol is being shown the sights of the Big Apple for the first time by handsome agent Bill Ainslee (Jeffrey Hunter) and finds that she likes spending time away from staid libraries and musty classrooms.

Director Claude Binyon based his screenplay on a story by John D. Weaver, but it doesn’t throw a very favorable light on the institutions of higher learning or on the closed mindedness of its snooty trustees (you’d think Sayre had been revealed as a child molester or a Nazi storm trooper rather than as a former actor the way they recoil in horror at the thought of his once having been in movies). What’s more, Sayre’s insistence on his contentment and fulfillment as a teacher seems like a lot of hot air in light of how things inevitably proceed. So, he loses his job at this small town college; there should be plenty of other institutions of high education if he truly wanted to return to teaching English literature and Latin, but none of that seems relevant in the story that is being offered here. Where the movie excels, of course, is in its slick, wicked show biz acumen: the hilariously awful television commercials we have presented to us (watch quickly to see a glimpse of the young Gwen Verdon as a dancer in the first commercial) and four excerpts from Bruce Blair’s ham-fisted silent epics: a Zorro-like turn as El Toro, a World War I flying ace, a Foreign Legionnaire, and a Scaramouche-styled swashbuckler, all of which feature Ginger Rogers as the femme fatale who fans his passions. No amount of heavy make-up and wily camera angles can take away twenty-five years from the looks of the stars playing themselves as silent screen icons, but one senses that’s supposed to be part of the fun. Because he can use doubles for the action stuff, Webb comes off better than Rogers in these old clunkers, but none of the four movie clips are as much fun as they could have been (Binyon does use one of the clips wittily, however, to enable Webb’s Sayre to defend his honor against a bully in a bar fight by copying his moves from his film in real time).

Clifton Webb does his caustic act here about as well as in many of his other films (though one longs for a climactic scene where he would put those supercilious trustees in their place instead of groveling to them), and he plays along valiantly with the silent movie homages. Ginger Rogers is given an extravagant nightclub production number “You’ll Never Know” draped in a lavish Travilla gown and fur wrap, but her affected line readings as a notable public figure go beyond satire and emerge as just poor acting. The Fox make-up department has to go some to deglamorize the gorgeous Anne Francis, but they go beyond the call of duty in making her frumpy and unappealing for much of the movie. Jeffrey Hunter has the patented charm boy moves down pat, and Fred Clark does his usual excellent job as the smarmy schemer out to make a buck. Elsa Lanchester is hilarious as the love-starved college dean smitten with Sayre’s screen alter ego Bruce Blair and willing to do anything to capture his heart.

The film’s theatrical aspect ratio of 1.37:1 is reproduced faithfully in this made-on-demand disc. However, there is a more than average amount of line twitter and some flashing going on, and the image’s grain structure increases and decreases during the course of the unspooling. Black levels are quite good, and the grayscale overall is unobjectionable with decent sharpness. There aren’t many age-related artifacts to contend with, but the reel change markers are certainly present throughout. The movie has been divided into chapters every ten minutes so this disc contains 9 chapters.

The volume level of the encode needs reduction to prevent distortion and equipment damage. Otherwise, the Dolby Digital 2.0 mono sound mix, decoded by Dolby Prologic into the center channel, features decent fidelity and clear enough dialogue combined with Cyril Mockridge’s background score and the atmospheric effects (the “silent” films have been tinkered with deliberately with piano scores and sound effects). There is persistent hiss present throughout the presentation and a few occasions where light crackle is also on hand.

Dreamboat may not wring out all of the comic potential that was present in its original idea, but there are sufficient laughs here and nice moments for all of the top stars involved in its making. A newer transfer with some attention to detail would go a long way toward bringing out the best that the film has to offer. 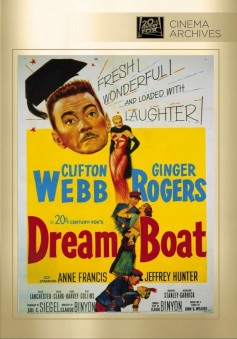