Better than expected, but that’s not saying much… 3.5 Stars

DragonHeart Vengenace (barely) rises above the already low expectations of Universal’s many direct to video sequels.

When a young farmer boy, Lukas (Jack Kane), witnesses his family murdered and his farm destroyed by raiders, he hires Darius (Joseph Millson) as a sword for hire to help hunt down those responsible.  Of course, the deal goes sideways, forcing Lukas to fell the city alone. While wondering the woods, he encounters a cave inhabited by Siveth (voiced by Helena Bonham Carter), an ice-spitting and shape-shifting dragon who was banished from the village as a traitor many years ago. The two become friends as Siveth agrees to help Lukas track down the marauders. They meet up with Darius, who rejoins the hunt. But Darius has met Siveth before, a long time ago….

DragonHeart Vengeance is the fifth film in the series (the fourth to be released direct to video), and apparently according to the prologue, there were a total of eight dragons that had pledged to defend the lands, so I guess we can expect at least three more sequels. To be honest, I actually dread anytime Universal drops a direct to video release on my doorstep for review. The vast majority of these releases are sequels to movies that were released decades ago, and in most cases, audiences haven’t exactly been clamoring for a sequel, either. I’m talking about direct to video movies like Backdraft 2, The Car: Road to Revenge, Inside Man 2, Jarhead: Law of Return, Undercover Brother 2, etc. Most of these sequels actually have little to nothing in common with their original, not even a cast member, and have no real star power, either. To some extent, that is the case here with DragonHeart Vengeance. The first DragonHeart was released theatrically in 1996, which starred Dennis Quaid as the warrior and Sean Connery voiced the dragon. All subsequent sequels were direct to video releases. This new release has Joseph Millson as its top-billed lead, who has appeared in films and TV shows like Casino Royale, Angel Has Fallen, and 24: Live Another Day. Jack Kane has had a very brief career so far, mostly in British television series such as The A List and The Dumping Ground, and had a blink and you’ll miss him role in Hobbs & Shaw. Like I said, no real star power here, with the exception of Helena Bonham Carter lending her voice to the dragon Siveth. Millson and Kane actually have enough charisma to carry this movie, and that is one of the film’s few strong points. The plot is rather silly (for some reason Lukas, Darius, and Siveth must defeat each marauder individually), but the action is at least fun to watch, thanks to director Ivan Silvestrini (this is his first English-language film). DragonHeart Vengeance isn’t a good movie per se, but it’s definitely not unwatchable and a decent 97 minute distraction.

DragonHeart Vengeance looks absolutely stunning on Blu-ray, especially if you compare it to the abomination that is currently playing on Netflix (as with most Universal direct to video releases, they arrive day and date on the streaming service). My wife sat down to watch this on Netflix over the weekend, and it was riddled with banding and other compression artifacts (and this was streamed over a 400Mbps internet connection). The Blu-ray has none of those issues, a complete 180 of that streaming experience. Colors are bold and vivid (there is a lot of turquoise in the costume designs that really pops on the Blu-ray). Detail is exceptional, from the fine particles of dirt on the ground, to the wear and tear in Daruis’ coat and the intricate weaving of Lukas’ vest. Contrast is very good, with decent black levels that almost go past a deep dark grey, yet whites are nicely bright without evidence of clipping.

The DTS-HD MA 5.1 track is a very active one, with lots of surround activity like singing birds that help to immerse the viewer. LFE is present, adding a nice low end to dragon footsteps and landings. Dialogue is clear and understandable throughout, directed mostly to the center channel.

Creating Siveth (1080p; 2:05): Another brief EPK piece, this time centering more around the voice work by Helen Bonham Carter than the CG animation.

DVD Copy: The movie in 480p with Dolby Digital 5.1 audio, plus both special features listed above.

I went in to DragonHeart Vengenace with very low expectations, and yet it was not quite as bad as I had anticipated, actually being one of the better direct to video releases from Universal. 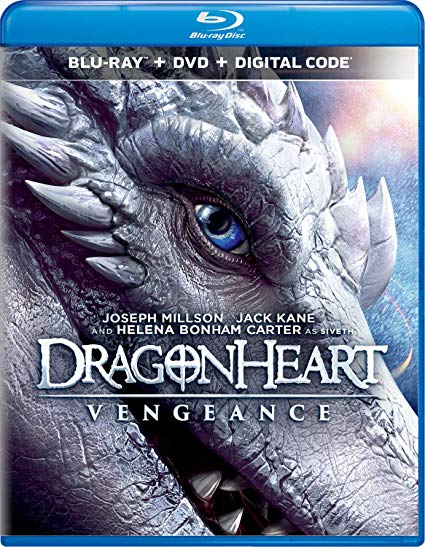