Forum List What's new Dark Style Change width
Log in Register
What's new Search
Menu
Log in
Register
Navigation
Install the app
More options
Dark Style
Close Menu
Posted on June 9, 2017 by Matt Hough
You are using an out of date browser. It may not display this or other websites correctly.
You should upgrade or use an alternative browser.
A decent if unmemorable fourth entry in the franchise 2.5 Stars

The fourth in the series of Dragonheart films, this third sequel to the 1996 original feature film, subtitled Battle for the Heartfire, is another made-for-home video effort, well enough done as these things go though no one will look to the writing here and confuse it for anything literary.

The fourth in the series of Dragonheart films, this third sequel to the 1996 original feature film, subtitled Battle for the Heartfire, is another made-for-home video effort, well enough done as these things go though no one will look to the writing here and confuse it for anything literary. It’s another medieval adventure fantasy mixing Britons and Norsemen in a story of sibling rivalry, divided houses, and the unquenchable draw of family love and loyalty.

When King Gareth dies, his bonded dragon Drago (voiced by Patrick Stewart) is amazed to find he hasn’t died along with the king but rather is now bonded to his heir, a grandchild named Edric (Tom Rhys Harries), now crowned King of Britannia, who has the strength of three men as part of his bond with Drago. But Drago realizes that his bond with Edric is incomplete and is then surprised to learn that Edric had a twin sister Meghan (Jessamine-Bliss Bell) who is a fire manipulator. She returns to Britannia with a Viking army in tow to claim the throne for herself, being the older of the twins by a few minutes. When the cocky, stubborn, and chauvinistic Edric refuses to give the throne up to his sister, war is declared but is quickly over when Meghan manages to draw the heartfire out of Drago for herself now becoming an army of one. Edric is banished, and Meghan rules with the might of the Norse army to quash any rebellions.

Matthew Feitshans’ screenplay tries to service a number of different themes including sibling relationships based on a common bond, the value of working together for a common goal, and even a very modern statement of equality of the sexes with the warrior Viking women teaching their Brit counterparts the way to take respect forcibly if it isn’t offered willingly. Some of the themes get lost in the petty squabbling between the two siblings, and the business of bonding between the two of them and the dragon Drago seems to come and go in the narrative, used only when germane in the moment. For a made-for-home video film, it’s more violent than one might expect, but its production values are also much higher than in the usual home video effort, the CG dragon and numerous locations (the film’s main castle set was filmed in Romania but surrounding settings are computer generated) seeming much more photorealistic than one might expect on a limited budget. Director Patrik Syversen keeps things moving and doesn’t protract fighting sequences or the climactic showdown between Edric and Viking commander Thorgrim (André Eriksen) though the main purpose of the fight, the rescue of the heartfire, seems to have become an afterthought in much of the film’s final third.

Both Tom Rhys Harries as Edric and Jessamine-Bliss Bell as Meghan have the arrogance and cocksure attitudes down pat though their changes of heart do seem to arrive pretty suddenly. Patrick Stewart voices Drago acceptably (Sean Connery was the first voice of Drago in the original film) and makes sure all the lessons the film is attempting to teach get full verbal coverage by the end. André Eriksen makes a formidable physical Viking opponent for Edric, and his queen Sable played by Marte Germaine Christensen is his warrior equal. Martin Hutson gives real depth of feeling as the priest Osmund, Turlough Convery has some effective moments as the twins’ tragic father Walter, Richard Cordery is a snake-like treacherous Earl, and Lewis Mackinnon has enormous fun as a strolling player whose company gives a performance for the Vikings as a cover for Edric’s plans to regain the heartfire.

The film is framed at 1.78:1 and is presented in 1080p resolution using the AVC codec. While sharpness is occasionally first-rate with plenty of detail to be seen in those dragon scales the two siblings sport as well as other facial features, clothes, and hair, not all of the images are consistently sharp as oddly softer shots sometimes arrive without reason. Color is robust and well controlled with no blooming in even the brightest fire hues. Black levels are very good without ever reaching maximum depth. The movie has been divided into 20 chapters.

The DTS-HD Master Audio 5.1 sound mix offers very good fidelity and a decent surround environment on an obviously limited budget. Dialogue is relegated to the center channel. The music by Mark McKenzie gets full spread through the fronts and rears though atmospheric effects sometimes are pitched more toward the front soundstage than toward the rear.

The Making of Dragonheart: Battle for the Heartfire (4:53, HD): a few soundbites on the story of the film and its basic production are offered by director Patrik Syversen, screenwriter Matthew Feitshans, producer Raffaella De Laurentiis, and actors Patrick Stewart, Tom Rhys Harries, and Jessamine-Bliss Bell.

The Magic Behind Drago (4:37, HD): the importance of the talking dragon character to the Dragonheart franchise is discussed by actor Patrick Stewart, director Patrik Syversen, screenwriter Matthew Feitshans, and production designer Dan Toader.

Adventure fantasy fans will likely want to at least rent Dragonheart: Battle for the Heartfire even if the concept’s magic and mystical power seems dissipated by this fourth effort. Picture and sound are very good for a made-for-home video release.

I am in shock that there is a Dragonheart 4 as I did not even realize there had been a Dragonheart 2 or 3.
You must log in or register to reply here. 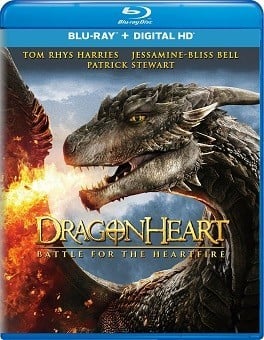