Forum List What's new Dark Style Change width
Log in Register
What's new Search
Menu
Log in
Register
Navigation
Install the app
More options
Dark Style
Close Menu
Posted on July 21, 2018 by Sam Posten
You are using an out of date browser. It may not display this or other websites correctly.
You should upgrade or use an alternative browser. 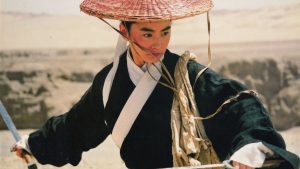 Dragon Inn is a classic of Taiwanese Wuxia cinema, which roughly translates to martial hero, aka swordsman hero, fighting with weapons rather than bare-hands. It’s been remade twice and is the overarching influence on Crouching Tiger, Hidden Dragon. It’s influenced tons of other films you’ve inevitably seen, and has echoes in time back and forward, such as 7 Samurai and both versions of The Magnificent Seven. The restaurant in Kill Bill could have been mapped from the interior of Dragon Inn.

It’s a simple setup (with a lot of moving parts) that allows both heroes and villains to show off their style, ego, and skill. In the mid 1400s a new emperor has come to power. He has set his eunuch espionage groups the Imperial Guards and the East Espionage Chamber to task removing the powerful from the previous administration, and killing their families too. The evil eunuchs attempt to the children of a previous minister, but only kill half of them.
They know the children’s path out of country so they plan to ambush them at the Dragon Gate Inn.

At the inn, wandering swordsman Xiao (Shi Jun) confronts the first half of the eunuch army, and meets up with innkeeper Wu Ning (Cao Jian) and siblings Hui Zhu (Shangguan Linfeng) and her brother Ji Zhu (Xue Han). Together they band together, aiming to protect the children or die trying. 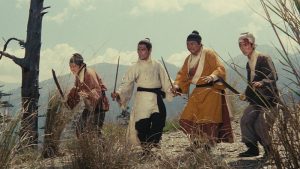 Criterion’s release of Dragon Inn is a 4k restoration down-converted to Bluray 1080p with Mono Mandarin and English Subtitles.

This was the first time I’ve seen Dragon Inn, tho I could feel the pull of its influences on dozens of films I have seen over time and could see both the films that it was itself influenced by.  Watching the extras I learned how director King Hu integrated motion and editing techniques to elevate the artistry of the genre, and was rewarded with tremendous acclaim both in China and around the globe. 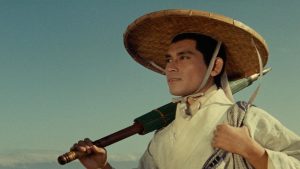 At the heart of Dragon Inn is the collection of off-beat heroes and the villains they must defeat.  Xiao’s bemused swordsman escapes poisoning through trickery and flipping the odds in his favor.  Hui Zhu also avoids poisoning by sending the poison back on her attackers while acting as a gracious dinner guest.  Ultimately the fight with eunuch Pi (Ying Bai) shows the extent of acrobatic fighting possible with minimal wire work that was possible in the late 1960s.

Combining these colorful performances with epic widescreen photography showing off the Taiwanese countryside, the colorful garb of the attacking army versus the simple garb of the heroes, and the dramatic fight scenes puts Dragon Inn into the realm of classics whose influence can be felt decades later.

Dragon Inn is spectacularly captured in Janus Film’s 4k reconstruction.  It’s clean, colorful and free from artifacts.  If I had any complaints at all it is that some of the fast pans seemed a little rubbery.  And that this wasn’t a 4K UHD.  It’s time to get on that train, please Criterion!  Grain is evidenced throughout, in line with the original capture technique, but never a distraction.  The wide vistas include rocky terrain that is rendered in great detail and the closeups allow solid depiction of the cast’s emotion and  costuming.

The monaural track is bigger than it sounds.  I wish elements had been around to move stuff from the fronts into the back half of the room, but since most viewers will be racing to keep up with the subtitles, I’m not sure it’s all that big a deal.  The focus is on the dialogue, I can’t even remember if there was much from the musical side of the soundtrack! 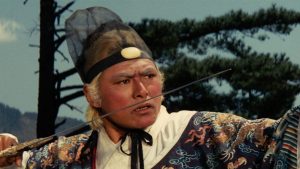 Criterion’s capability to put together epic extras is legendary, and they do a solid job here.  Leading my recommendations is that EVERYONE interested in the history of film should set aside a half hour to watch New York Film Festival organizer Grady Hendrix break down the choreography of the fight scene between Hui Zhu and the invaders.  He illustrates how King Hu masterfully mixes editing cuts, action, camera speeds, acrobatics, trampoline moves and more to create a sense of super human skill.  It’s worth watching and rewatching!

There’s also an interviews with Shih Chun and Shangkuan Ling-Fung, which will appeal to those who want to know more about how Dragon Inn influenced their careers.  There’s also a newsreel showing how Dragon Inn was received, and the original trailer for the film.

Also great is the 10 page fold in poster, with further analysis and history on the back.  Very cool!

Overall I’m not sure how I have missed seeing Dragon Inn until now but I am really glad to have finally caught up with it.  On it’s own it is an entertaining film that has many references to films I enjoyed and I can see the influence it has had on directors like Fuqua and Tarantino.  But Criterion has allowed me to see a witness into how King Hu became a sensation in his own right, and the success this film had because of what he put into it.  You can’t beat insights like that!

I'm picking this up from Barnes and Noble on Monday. Thanks for the review.

I really dug it, hope you will too!
You must log in or register to reply here.