There is no fighting in the War Room! 4.5 Stars

There are some who may feel that Stanley Kubrick’s Dr. Strangelove seems a bit outdated, but I disagree. Without going too deep into politics, the threat of an all-out nuclear war may not be quite as prevalent as it was in 1964 (when the movie was released), and the nations instigating that terror have obviously changed. However, Kubrick’s film is rather timeless, as the fear of one man deciding the fate of the world has not changed. Inspired by the obscure novel Red Alert by Peter George, Dr. Strangelove opens with orders sent to the 843rd Bomb Wing squadron of 34 nuclear-armed B-52 bomber by US Air Force Brigadier General Jack D. Ripper (Sterling Hayden) – one of several plays on names – to initiate attack Plan R once they pass their fail-safe point over Soviet air space. President Merkin Muffley (Peter Sellers, in one of three roles) calls his team to the War Room, including Air Force General Buck Turgidson (George C. Scott), to devise a plan to recall the attack. Unfortunately, Plan R has no recall option when the planes cut off all communication, as designated by the orders. This leads to a rather humorous telephone call with the Soviet Premier by President Muffley (One of our base commanders went a little funny in the head and he went and did a silly thing…). Dr. Strangelove is an absurdly funny and also horrifying movie, continuing what would become a rather steady stream of classic films starting with Paths of Glory and Lolita prior to this and followed by 2001: A Space Odyssey and A Clockwork Orange, and ending with Eyes Wide Shut.

Over the years, time and popularity have not been kind to this film, with the original negative inadvertently destroyed at one point. Grover Crisp and his team completed a 4K restoration and digital intermediate of Dr. Strangelove in 2004 from a Fine Grain master positive, a duplicate negative, and a 35mm print, using digital tools to match the three different sources and perform additional cleanup. For this 4K UHD/HDR release, the 2004 4K restoration was the beginning point, using HDR to bring out more detail and deepen the contrast. Compared to Sony’s 2009 Blu-ray release (also included in this set), this new release show a slight increase in detail, but also an increase in visible film grain (but nothing to the level of Mr. Smith Goes to Washington). The film grain here is pleasing and only distracting if you are actually looking for it. Contrast is better resolved as well, allowing the film to have a much broader greyscale than previous home video versions.

While the 2009 Blu-ray release included a Dolby TrueHD 5.1 track, this 4K UHD release includes the same mix but using DTS-HD MA, plus the original mono track in DTS-HD MA. The 5.1 mix is still very front heavy, with minimal surrounds but a wider front stage. This is by no means a reference quality mix, but suits the film fine, allowing for clear dialogue reproduction and overall nice fidelity.

UHD Disc:
Stanley Kubrick Considers the Bomb (1080p; 5:38): Newly created for this release, featuring an audio interview with the director, plus Jan Harlan, daughter Katarina, among many others.

Mitch Broderick Interview (aka Flying Solo: Stanley Kubrick as Producer) (1080p; 19:14): This originally appeared on the 2016 Criterion Blu-ray edition. The author of Reconstructing “Strangelove” talks about Kubrick’s career including taking the reins as sole producer for the first time on Dr. Strangelove, and the production of the film.

Joe Dunton and Kelvin Pike Interview (1080p; 12:13): Also from the 2016 Criterion release, the two men discuss the use of black and white cinematography in the film as well as Kubrick’s unique vision.

Richard Daniels Interview (1080p; 14:15): Another port from the Criterion Blu-ray, the senior archivist for the Stanley Kubrick Archive talks about Kubrick’s creative process and the development of Dr. Strangelove.

David George Interview (1080p; 10:56): The son of the author of Red Alert, the source material for Dr. Strangelove, discusses his father’s collaboration with Kubrick.

Rodney Hill Interview (1080p; 17:25): Hill, who is a contributor at The Stanley Kubrick Archives, looks at the themes of the film. Ported from the Criterion Blu-ray.

Archival Stanley Kubrick Audio Interview (1080p; 2:50): Kubrick discusses his concerns with the nuclear fears of the early 1960s that led to the development of the film.

The Today Show Clips (upscaled 1080p; 16:38): Gene Shalit interviews Peter Sellers (circa the release of Being There) and Bryant Gumbel interviews George C. Scott just prior to the Broadway opening of Noel Coward’s Present Laughter.

Split-Screen Interviews with Peter Sellers and George C. Scott (480i; 7:17)

Stanley Kubrick’s Dr. Strangelove or: How I Learned to Stop Worrying and Love the Bomb has never looked better than it does in this new 4K UHD release, loaded with many of the special features from Criterion’s and Sony’s previous Blu-ray releases.

I agree with Todd about the film not being outdated and with all the crazy things happening today some military "mistake" could happen. One of the great war films of all time.

Thanks for the review, Todd. I would love to see some comparisons with the recent Criterion BD release, to know if this is a significant upgrade over that transfer -- which I thought was excellent. I will not upgrade this one to 4K unless there is a significant difference -- that is, assuming that Sony eventually releases these films separately in 4K.
Reactions: Yeoman007 and John Dirk
You must log in or register to reply here.
Share:
Facebook Twitter Reddit Pinterest Tumblr WhatsApp Email Link 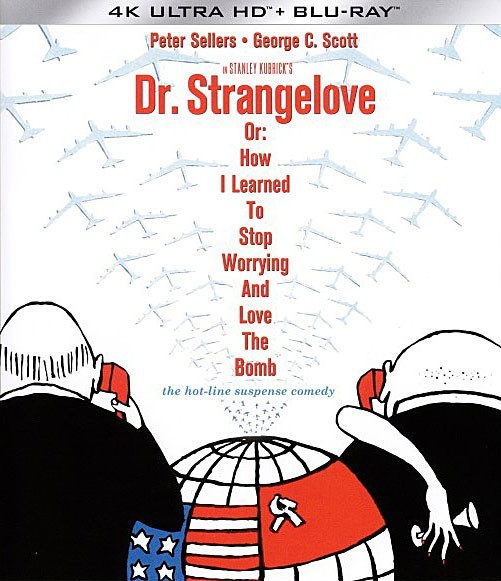