Forum List What's new Dark Style Change width
Log in Register
What's new Search
Menu
Log in
Register
Navigation
Install the app
More options
Dark Style
Close Menu
Posted on February 4, 2019 by Timothy E
You are using an out of date browser. It may not display this or other websites correctly.
You should upgrade or use an alternative browser.

The  Grinch is reinvented again for the 21st Century in the new feature film produced by Illumination Studios, the company that brought us the Minions of Despicable Me and the animals of The Secret Life of Pets.

The Grinch(Benedict Cumberbatch) is a green-furred creature who lives on the mountain overlooking Who-ville, a town populated by anthropomorphic “Whos”.  The Whos celebrate Christmas with great joy, to the chagrin of the Grinch who resembles no one so much as Ebenezer Scrooge.  The Grinch enlists his dog, Max, in his plan to steal Christmas away from Who-ville.  The Grinch is destined to meet Cindy-Lou Who(Cameron Seely) in executing his plans.  Cindy-Lou has her own plans to capture Santa this Christmas, which she plans behind the back of her overworked and underappreciated mom, Donna Lou Who(Rashida Jones).  The Grinch’s bad attitude is demonstrated with his frustration with his joyful neighbor Brickelbaum(Kenan Thompson).

The Grinch is ultimately a parable about accepting joy in your heart and the kind spirit of Christmas.  Dr. Seuss’ How The Grinch Stole Christmas was first published in 1957, and gave rise to the cherished TV special of the same name that was produced by Chuck Jones in 1966, which featured Boris Karloff as the Grinch(turned to green from white in the original story), and introduced the song “You’re A Mean One, Mr. Grinch” performed by Thurl Ravenscroft, the original voice of Tony the Tiger.  The Grinch appeared in 3 animated TV specials, but the first one from 1966 is the one remembered by everyone.  Jim Carrey mugged as the Grinch in a live-action feature film of How The Grinch Stole Christmas(2000) directed by Ron Howard.
Dr. Seuss’ The Grinch is produced by the same studio that created the Despicable Me and The Secret Life of Pets films.  The voice cast also includes Pharrell Williams as the narrator and Angela Lansbury as Mayor McGerkle of Who-ville.  Tyler the Creator contributes a couple of songs to the soundtrack, including a new version of “You’re A Mean One, Mr. Grinch”.  The soundtrack includes a laundry list of Christmas staples, from Nat King Cole and The Supremes to the Brian Setzer Orchestra and Run D.M.C.  The original score by Danny Elfman deserves special mention for its creation of manic mood in the film, and does it so seamlessly that its contribution may be imperceptible until one considers what the film would be without its music.  If one mutes the volume and watches for a minute, and then turns the volume back up, it is obvious that the music contributes nearly as much to the film as the visuals.
Dr. Seuss’ The Grinch is entertaining enough with its brilliant animation and talented voice cast, but suffers from the same issue as the other remakes, since it inevitably pales in comparison with the 1966 version, which arguably surpasses the original source material of the book.  Time marches on, though, and many filmgoers have never seen the original TV special, so they do not bring any expectations to The Grinch(2018).  For them, this iteration of the story belongs to them, and The Grinch(2018) is a fun and entertaining film in its own right.

Dr. Seuss’ The Grinch appears on 4K UHD in a 2.39:1 screen aspect ratio.  The color range is kaleidoscopic on the UHD disc and on the Blu-ray with solid blacks and fine detail as expected in a transfer of a CGI film.  I cannot say that the film has noticeably brighter, deeper, and more lifelike color in UHD than on 1080p blu-ray, since both discs are excellent in this regard, but definitely the UHD version seems crisper for contrast, and perhaps color, than the blu-ray.  Fine detail is most evident on the figures with the light patina of fur on all of the characters.

Dr. Seuss’ The Grinch appears on UHD and blu-ray with a Dolby Atmos soundtrack by default.  The Dolby Atmos video is all-encompassing but seems limited in its use of directional cues.  The music selections of Christmas tunes and the score created by Danny Elfman are served well in this sound mix, and the subwoofer provides some deep bass rumbles when appropriate.  There are no perceptible flaws in the sound mix, but at the same time, it does not necessarily rise to demo level.  The inclusion of Dolby Atmos on a 3D release is nothing to be sneezed at, said the Sneezle, but this will probably not be the film you select to show off the range of audio in your home theater.

Special features on both the UHD and Blu-ray discs include all of the following:

From Green to Screen: Making The Grinch(6:19):  Creators of the film talk about adapting it from the source material by Dr. Seuss.
Illuminating The Grinch(4:55):  Director Yarrow Cheney and the computer artists talk about the challenges of transferring the Grinch from one-dimensional artwork in the book to being in three-dimensions for film.
Who’s Who in Who-ville:  The Grinch, Cindy-Lou, Max & Fred, Head Whos, and Cindy-Lou’s Crew each have a character profile, walk cycle, animation tests, and a photo gallery in this interactive feature navigated with the remote control.
My Earliest Grinch Memories(3:10):  The voice actors and artists talk about their memories of the book.
Grinchy Gadgets(3:21):  Creators show off the Minion-esque gadgets highlighted in the film.
“You’re A Mean One, Mr. Grinch” Lyric Video(1:55):  Sing-along video of the new version by Tyler the Creator.
“I Am The Grinch” Lyric Video(2:48):  Sing along video of the song.
Songs From His Little Heart(3:25):  Director Scott Mosier and others talk about the score by Danny Elfman.  Elfman appears and discusses the aborted project to do a musical with Theodore Geisel many years ago.
Any Who Can Draw:  The Grinch(7:09), Max(2:04), and Fred(2:11) are highlighted in featurettes hosted by artist and head of story Mark O’Hare.  These are playable individually or with a “play all” selection.
X-Mas Around The World(2:20):  Featurette highlights various Christmas customs around the world with commentary by the Grinch.
Cindy-Lou’s Yule Log(8:02):  This video yule log can be played on a loop during Christmas(or not) with the Grinch speaking in the background with music provided by Danny Elfman.
Production Babies(1:16):  Head of story and artist Mark O’Hare introduces the names of all of the children born to the production team during the making of the film.
Mini Movies: ” Yellow is the New Black”(3:58) features Minions on a prison break, “The Dog Days of Winter”(4:05) has Max on a mission to get a hot coffee for the Grinch, and Minions help Santa’s elves get ready for Christmas in “Santa’s Little Helpers”(3:51).
The Making of the Mini-Movies(5:53):  Illumination Studios founder and CEO Chris Meledandri and his directors talk about creating the shorts included in this collection.
Also included is a paper insert with validation code for playback of the film via mobile devices on the Movies Anywhere app.

Dr. Seuss’ The Grinch on 4K UHD and Blu-ray is a lively reinvention of the original story.  This version may not have all of the heart of the TV special of 50 some years ago, but Dr. Seuss’ The Grinch will probably be the version of the 21st Century that is looked back on fondly 50 years from now.  The visuals are as crisp as expected from CGI animation, and the audio is also fine, if not exceptional.  The special features are worthwhile, particularly the mini-movie shorts, and the yule log feature is a nice touch.  Universal is releasing this on 3D Blu-ray with the same features but with the 4K UHD disc swapped out for the 3D blu-ray disc.  The film really pops visually in 3D so both versions are recommended to anyone with a 4K and 3D setup.  Dr. Seuss’ The Grinch is a light, fluffy concoction to be enjoyed by children from ages 2 to 200.
https://www.amazon.com/dp/B07JZVP6G6?aaxitk=08pgj8WNQsdtuxL3bw1xoQ&pd_rd_i=B07JZVP6G6&pf_rd_p=3ff6092e-8451-438b-8278-7e94064b4d42&hsa_cr_id=2316000840701&sb-ci-n=productDescription&sb-ci-v=Illumination%20Presents%3A%20Dr.%20Seuss'%20The%20Grinch
Post Views: 2,548 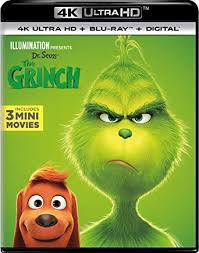