Forum List What's new Dark Style Change width
Log in Register
What's new Search
Menu
Log in
Register
Navigation
Install the app
More options
Dark Style
Close Menu
Posted on March 21, 2018 by Todd Erwin
You are using an out of date browser. It may not display this or other websites correctly.
You should upgrade or use an alternative browser.
Unfocused and mismarketed 3 Stars

Downsizing arrives on 4K UHD Blu-ray in an uninspiring video presentation that does not take advantage of any of the features the format provides, appearing almost identical to the included Blu-ray version of the film.

As I sat down to write my review of Downsizing on UHD, my colleague, Neil Middlemiss, had just published his review of the Blu-ray edition minutes earlier. Since I share many of his same feelings about the film, I suggest reading his review, then returning to read some additional thoughts I have and my reason for a slightly lower score.

I completely agree with Neil’s assessment that telling this story as a mini-series on a platform such as HBO, Netflix, Showtime, or even TNT or F/X would have served it better, as there is way too much going on that, unfortunately due to its 2 ¼ hour running time, never gets fleshed out adequately, with ideas being introduced, then not followed through to completion (or worse, rushed to completion). The movie also suffers from not really knowing what it wants to be, a comedy, social satire, thought-provoking drama, etc. And Paramount’s decision to market the film as a whimsical science fiction comedy makes it even more schizophrenic (no wonder the film scored an audience rating of 23% on Rotten Tomatoes). The cast is well-executed, with Damon, Waltz, and Wiig shining in their roles, and unknown Hong Chau (who has had recurring roles in television series such as Big Little Lies, A to Z, and Treme) was a real find for director Alexander Payne. As a whole, the movie felt dull and lifeless, and perhaps I’m not as forgiving as Neil, hence my 2.5 star rating compared to his 3 stars.

Downsizing’s presentation on 4K UHD Blu-ray is almost as disappointing as the film is. Captured at 3.4k resolution primarily on Arri Alexa Mini and XT Plus cameras, then completed as a 2K digital intermediate, Paramount’s 2160p upscale with HDR10 high dynamic range ultimately appears no different from its Blu-ray counterpart. There is no noticeable increase in clarity or detail, colors are just as subdued but natural. Even contrast is identical, although some of the darker sequences were often dark grey rather than deep black (with the black letterbox bars also going dark grey in those same scenes). There is no indication on the packaging or disc label that this disc includes Dolby Vision, and I have no way of confirming if this disc has Dolby Vision, as my equipment is not DV-capable.

Downsizing on 4K UHD Blu-ray contains the same DTS-HD MA 7.1 track found on the Blu-ray version. As Neil Middlemiss noted in his review:

The 7.1 DTS-HD Master Audio isn’t taxed–it just isn’t that kind of film, but what is asked of the audio is handled well. The noise of crowds, the bumpy bus-ride Damon and Chau take, the busy, commercial spectacle of crowds contemplating what the small community of Leisureland has to offer, are good examples of where the audio steps up nicely, and even Rolfe Kent’s likeable, content score is delightfully used. The party sequence where Damon’s character gets more than he bargained for is a highlight, but you won’t get neighbors complaining if you play this one too loud.

All of the self-congraulatory Special Features can be found on the included Blu-ray Edition.

Digital Copy: An insert contains a code to redeem digital copies on UltraViolet and iTunes. I redeemed on Vudu and received UHD versions on both Vudu and FandangoNow.

Downsizing arrives on 4K UHD Blu-ray in an uninspiring video presentation that does not take advantage of any of the features the format provides, appearing almost identical to the included Blu-ray version of the film. Fans of the film would be better off saving their money and purchasing the film on Blu-ray. 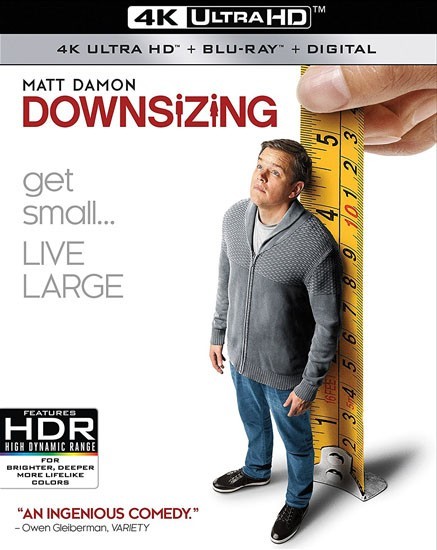