Forum List What's new Dark Style Change width
Log in Register
What's new Search
Menu
Log in
Register
Navigation
Install the app
More options
Dark Style
Close Menu
Posted on April 16, 2018 by Matt Hough
You are using an out of date browser. It may not display this or other websites correctly.
You should upgrade or use an alternative browser.
An effective and quite watchable noir docudrama 4 Stars

Arnold Laven’s FBI-based docudrama Down Three Dark Streets combines investigations of several taut and frustrating cases with a behind-the-scenes look at FBI techniques and analytical expertise that keep interest high and suspense nicely sustained. The film noir tone of the story combined with excellent performances from a handful of reliable stars and character actors make Down Three Dark Streets rather unique among its 1950s’ peers.

When busy FBI agent Zack Stewart (Kenneth Tobey) is murdered during the course of his job, his three open cases fall into the hands of his experienced FBI partner John Ripley (Broderick Crawford). Obviously Stewart’s murderer is connected to one of the three cases, but discovering the guilty party and bringing each of the three cases to its conclusion becomes the full-time duty of Agent Ripley. One investigation involves a ring of crooks who are hijacking cars with the driver Vince Angelino (Gene Reynolds) unwilling to give up his partners-in-crime. Another deals with killer Joe Walpo (Joe Bassett) on the lam with an itchy trigger finger. The third case revolves around the extortion and potential kidnapping of widowed businesswoman Kate Martell (Ruth Roman) and her four-year-old daughter. Ripley and his FBI cohorts find their hands full bouncing between these three cases all of which offer an eccentric and eclectic array of somewhat untrustworthy characters.

Based on the novel Case File: FBI, the film’s screenplay was adapted by the book’s original authors Gordon and Mildred Gordon along with Bernard C. Schoenfeld, and they’ve been careful to include not only intricate looks behind-the-scenes at the FBI including early work with forensics, voice recognition, and surveillance but to people the story with a rich cross section of character types which keeps things interesting: fame hogs and inveterate gamblers, a duplicitous blonde, a pug-ugly brute, a delicate blind woman who’s a lot tougher and more helpful than her attacker would believe, a common masher, and many others. It’s also somewhat unusual in that during the movie, the FBI does make mistakes and gets thwarted on occasion. Director Arnold Laven stages the stalkings and shootouts interestingly, and there’s a nicely creepy cemetery sequence that makes the most of its deep shadows and shuddery noises in the depth of night. And for its era, the movie is pretty brutal: there’s the body of a lovely woman stuffed into a trash can, and an ex-prizefighter cuffing around a slightly-built blind woman doesn’t leave much to the imagination. The central mysteries concerning the identities of the shooter of FBI agent Stewart and the extortionist aren’t the biggest surprises ever pulled off in a movie mystery, but they’re decent revelations if one isn’t paying very close attention to details.

The role of FBI agent John Ripley is a natural for Broderick Crawford, and some may be surprised by the amount of gentleness he brings to certain portions of his character as he deals with small children and frazzled females. A year later, he’d be much more authoritative and dour as Dan Mathews on TV’s long-running Highway Patrol. The movie pulls a fast one on the audience when it kills stalwart FBI man Kenneth Tobey in its first ten minutes thus redirecting the focus on Broderick Crawford’s character taking over Tobey’s cases, but it’s a nice surprise early-on. Ruth Roman wrings all of the frayed nerves and querulous voice out of her extorted Kate Martell, and actors Casey Adams, Jay Adler, and Myra Marsh are very good as the people in her orbit. Marisa Pavan is lovely as the adept blind wife trying to do right by her luckless husband played by Gene Reynolds many years before his great success as a TV producer of such hits as MASH, Room 222, Lou Grant, and Blossom. Martha Hyer walks away with all of her sequences as the sneaky but proud blonde bombshell Connie Anderson, and Claude Akins has a couple of highly effective scenes as a brutal pug slapping around the helpless Julie of Marisa Pavan. Look quickly and you’ll notice familiar faces like Stafford Repp and William Schallert in unbilled roles, and William Woodson provides the stentorian narration and cameos as a voice recognition expert late in the movie.

The film is framed here at its original theatrical aspect ratio of 1.75:1 and is presented in 1080p resolution using the AVC codec. Apart from some speckling late in the film, the grayscale image quality is superb with rich black levels and crisp, clean whites. Sharpness is generally excellent though occasionally a little soft in a few shots. Contrast has been nicely applied throughout. The movie has been divided into 6 chapters.

The DTS-HD Master Audio 2.0 mono sound mix is very typical for its era. Dialogue has been combined quite professionally with the various sound effects and Paul Sawtell’s effective music score to make a fine mono soundtrack with surprisingly good fidelity. There is some age-related soft hiss and some slight crackling in a few quieter moments, but it’s never distracting.

There are no bonus features on the disc. There is a nice black and white still on the reverse side of the Blu-ray cover.

An excellent docudrama of the era showing the work of the FBI in three different but in surprising ways interconnected cases, Down Three Dark Streets adds another very watchable and recommended noir to the Classic Flix catalog.

Yeah, I'm looking forward to this BD release as I always liked this film. Damn, that screen grab sure looks wonky. Thank you for the review. I can finally get rid of my TCM DVD-R recording.

Thanks Matt, I've always been a big Broderick Crawford fan (not to mention a Robert Crawford fan too ). I know Twilight Time Movies is running a ClassicFlix sale and just added this and Five Steps to Danger today. From their April Newsletter: For the month of April, get 10% off when you purchase two ClassicFlix titles, 20% off four and 30% off when you purchase six. Discount is added automatically and only applies to the ClassicFlix titles on the same order.

Thank you, Adam, for providing this information. Fans of crime cinema of the 1950s should definitely find a way to add these two movies to their collections.

Adam Gregorich said:
Thanks Matt, I've always been a big Broderick Crawford fan (not to mention a Robert Crawford fan too ). I know Twilight Time Movies is running a ClassicFlix sale and just added this and Five Steps to Danger today. From their April Newsletter: For the month of April, get 10% off when you purchase two ClassicFlix titles, 20% off four and 30% off when you purchase six. Discount is added automatically and only applies to the ClassicFlix titles on the same order.
Click to expand...

Also, ClassicFlix is selling these latest two BD titles for $19.99 each plus $3.99 shipping for a grand total of $43.97. Thank you for the fan comment. I revisited my DVD-R copy again and I can't wait to finally have "Down the 3 Dark Streets" in it's OAR.

Thanks for the review, looking forward to receiving mine. Would have put Martha Hyer on the cover as well!

Keith Cobby said:
Thanks for the review, looking forward to receiving mine. Would have put Martha Hyer on the cover as well!
Click to expand...

Martha Hyer playing a gangster's moll is some interesting casting while playing Elizabeth Tyson in Sabrina that same year.
You must log in or register to reply here. 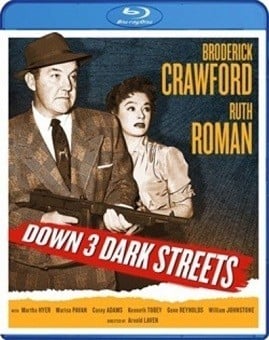