Forum List What's new Dark Style Change width
Log in Register
What's new Search
Menu
Log in
Register
Navigation
Install the app
More options
Dark Style
Close Menu
Posted on November 29, 2016 by Matt Hough
You are using an out of date browser. It may not display this or other websites correctly.
You should upgrade or use an alternative browser.
Interesting if somewhat superficial look at show business wannabes. 3 Stars

“Dying is easy; comedy is hard” so the saying goes, but for many of the members of the improv troupe at the nucleus of Mike Birbiglia’s Don’t Think Twice, it’s living that’s hard, at least making a living doing comedy.

“Dying is easy; comedy is hard” so the saying goes, but for many of the members of the improv troupe at the nucleus of Mike Birbiglia’s Don’t Think Twice, it’s living that’s hard, at least making a living doing comedy. The film which mixes hilarious on-stage improvised skits with dramatic scenes among the six members of the group doesn’t quite mesh together fluidly, and characterizations are often spotty and insubstantial, but there is a lot to like here, and the cast with its mix of familiar faces with unknowns scores occasionally both on stage and in real/reel life.

The improvisational comedy troupe The Commune has been performing together for almost a decade in a niche theater in New York, but things for them are about to change in a big way when Jack (Keegan-Michael Key) gets selected for a regular slot on the network sketch show Weekend Live. The group’s founder Miles (Mike Birbiglia) had auditioned for the show in 2003 but wasn’t selected for the cast and now hopes with his friend in the company, it might open another door for him. Members Allison (Kate Micucci) and Bill (Chris Gethard) form a writing team to submit a comedy packet to the show, and Jack’s girl friend Samantha (Gillian Jacobs), who was also offered an audition opportunity but turned it down, now believes her future lies with teaching improv skills to budding actors. Lindsay (Tami Sagher), the oldest member of the group and coming from a wealthy family who have supported her since college, secretly submits a comedy packet to the show’s producers without telling her fellow performers. With their venue about to be sold and thus finding themselves evicted and the group splintering, The Commune appears to be on its last legs.

Producer-director-star Mike Birbiglia has written the screenplay for the film though he freely admits that many of the improv sketches contained in the movie were arrived at while shooting and were better than his original suggestions in the script. Many of them are hilarious or at the very least contain inspired bits of lunacy that could have been further milked for additional laughs if that had been the purpose of the movie, but Birbiglia is more interested in observing what effect ambition and success or failure have on human relationships when the group is a family practically joined at their hips to one another. It’s not pretty, of course, as petty jealousies and guilt trips abound as various members of the group find different measures of success. Even Jack, the most obviously successful, can’t take much joy in the fact that making it to the top doesn’t mean that he will stay there given the vagaries of show business and the changing tastes of audiences. But Birbiglia hasn’t fully fleshed out all of his characters; he was going for an ensemble feel to the movie a la The Big Chill, but his characters don’t have the depth of backstory or fleshing out in a ninety-minute movie necessary for us to really get to know them the way we’d like. His direction is functional though members of the troupe who aren’t the focus of some of the skits are lost in the background though one suspects they might have been doing interesting bits on the periphery that the camera never quite catches.

The most famous cast member is likely Keegan-Michael Key who has the most pivotal role of Jack, an instant success on television after all the years of struggle (a struggle which, he makes clear, continues as he must cope with uneven comedy material and a producer whose good graces ebb and flow like the tides). Gillian Jacobs has some nice moments as Jack’s lover Samantha who eventually realizes his dream of stardom is really not for her since she prefers ensemble work rather than solo spotlights. Mike Birbiglia’s Miles goes through the most ego-shattering journey as it begins to sink in he’s probably not as talented as he assumes he is and is likely not going to become the comedy icon he dreams of being. Kate Micucci and Tami Sagher have less inspired on-stage moments than their colleagues, but Chris Gethard as the soft-spoken Bill has an interesting subplot dealing with his dying father (an almost unrecognizable Richard Masur). Ben Stiller and Lena Dunham make quick cameos as guest hosts of the sketch show almost everyone is longing to be on.

The film’s 2.40:1 theatrical aspect ratio is faithfully reproduced in this 1080p transfer using the AVC codec. Sharpness is pleasing without any degree of razor-sharpness, and color and skin tones are likewise acceptable without being exemplary. Contrast has been nicely applied for a consistent image though the film’s low budget definitely shows. The movie has been divided into 20 chapters.

The DTS-HD Master Audio 5.1 sound mix is mostly relegated to the front channels. Dialogue has been well recorded and has been placed in the center channel. Roger Neill’s background music occasionally sneaks into the rears without much impact, and atmospheric effects likewise make only occasional use of the rear soundstage.

Improv: Deleted Scenes (2:56, HD): a montage of improv scenes that didn’t make it into the finished film is offered.

Don’t Think Twice: The Art of Improv (3:09, HD): the six improv stars of the movie discuss it as a peculiar art form in this brief featurette.

The Commune (6:43, HD): each of the six actors who make up the troupe, Mike Birbiglia, Keegan-Michael Key, Gillian Jacobs, Kate Micucci, Tami Sagher, and Chris Gethard, describe the character he or she plays.

Don’t Think Twice is a pleasing if not exceptionally deep examination of the ambitions, hopes and dreams, sometimes successful and sometimes thwarted, of six talented improvisational comedians. This low budget film might be better as a rental than a purchase, but fans of the stars or the director (who also has his film Sleepwalk with Me about making it in standup comedy) might opt for the latter.

This was one of my favorite films so far this year and a definite day-one purchase for me. It's a shame that the extras seem so lightweight, but I still want the movie for sure.
You must log in or register to reply here. 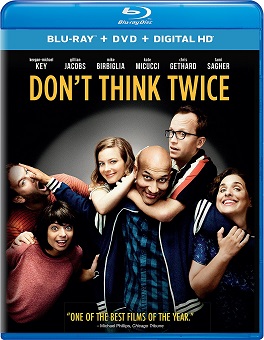