Posted on April 4, 2016 by Richard Gallagher
An intriguing "brain in a jar" film 4 Stars

Donovan’s Brain is an above-average thriller about a physician who has developed a method for keeping a brain alive after it has been removed from a body. The film comes to Blu-ray by Kino Lorber with a nearly flawless transfer and clean audio.

It’s against the law to operate on a corpse. It could mean jail!

Curt Siodmak, a novelist and screenwriter (The Wolf Man, Frankenstein Meets the Wolf Man, I Walked with a Zombie, etc.), published a best-selling novel in 1942 entitled “Donovan’s Brain.” The book was a best-seller and has had three film adaptations, the best and most famous of which was released in 1953. Siodmak wanted to direct Donovan’s Brain, but he complained that “He [producer Tom Gries] wouldn’t let me direct it because of a personal dislike. He was the meanest son of a bitch I had ever seen.” Others say that Siodmak was fired because he didn’t know how to direct, even though his older brother Robert was a quite accomplished director.

Dr. Patrick Cory (Lew Ayres) has been conducting experiments on the brains of monkeys in the laboratory of his home in the remote mountains of California. His sometimes medical assistant is the hard-drinking Dr. Frank Schratt (Gene Evans), a skilled surgeon when he is sober. Cory shares the home with his wife, Janice (Nancy Reagan, billed as Nancy Davis), who also is his laboratory assistant. Cory has been removing brains from live monkeys and attempting to keep the brains alive with electrical impulses. Four attempts have been unsuccessful, but on the fifth try he is able to keep the brain alive.

While monitoring the brain Cory receives an urgent phone call from the authorities. A small plane has crashed nearby, and they have been unable to reach Dr. Schratt, who is paid to respond to airplane emergencies. Schratt has had too much to drink and is sleeping it off, so Cory agrees to go to the crash site. There he discovers that the only survivor, a wealthy industrialist named W.H. Donovan, has sustained multiple life-threatening injuries. There is insufficient time to take Donovan to a hospital, so Cory agrees to treat him at his laboratory. Schratt has sobered up sufficiently to help, but their efforts to save Donovan are unavailing. The patient stops breathing and has no pulse, and he continues to be unresponsive when adrenaline is injected into his heart. He is clinically deceased, but Janice notices that brainwaves are still being detected by the brain monitor. “Not too unusual,” remarks Cory. “In violent death like the plane crash, organs of the body die at different times. His brain’s still alive.”

Over the objections of Schratt and Janice, Cory decides to remove Donovan’s brain and attempt to keep it alive. The procedure is a success, and Cory becomes obsessed with learning what the brain knows. Is it still capable of thinking and feeling? He eventually figures out a way to convert the brainwaves into soundwaves, and before long he begins to receive telepathic messages which cause him to think and act like Donovan. Significantly, Donovan was a ruthless capitalist who refused to pay taxes and was involved in drawn-out litigation with the Federal government. Donovan’s brain begins to exert control over Cory, forcing the doctor to do his bidding. Complications arise when a news photographer named Yocum (Steve Brodie) accidentally photographs the brain and figures out what Dr. Cory is up to.

Lew Ayres, who had a long and mostly distinguished career in films and television, is excellent as Dr. Cory. In effect he is playing two roles, as his personality takes a dramatic turn during the times when he is being controlled by Donovan’s brain. Janice is one of the better film roles for Nancy (Davis) Reagan, prompting Joe Dante to call this “one of her more sympathetic performances.” Gene Evans, one of Sam Fuller’s favorite character actors, is believable as Dr. Schratt, and Steve Brodie is fine as the conniving photographer.

The screenplay by Felix Feist is mostly faithful to the novel, although the character of Dr. Cory has been made more likeable and the location has been moved from Arizona to California. Feist also directs the film in an efficient manner, keeping the action moving along to its conclusion in a compact 83 minutes.

The 1080p black and white image is framed at 1.37:1 and is encoded with the AVC codec. The transfer is sharp throughout, with the exception of a few seconds of softness in the final reel. Contrast is strong, black levels are excellent, and shadow detail is very good. The source material is in excellent shape, with no damage of speckling to interfere with the viewer’s enjoyment. This is one of the better Blu-ray transfers which MGM has provided to Kino Lorber.

The excellent cinematography is by Joseph Biroc, whose long resume includes such diverse films as It’s a Wonderful Life and Blazing Saddles. He makes excellent use of exterior locations in Los Angeles.

The DTS HD-MA 2.0 soundtrack is clean and demonstrates good fidelity. My Blu-ray player is telling me that the audio is in stereo, but if there is any separation I cannot hear it. IMDB states that the original soundtrack for Donovan’s Brain was mono. The music by Eddie Dunstedter is not particularly memorable. Every word of dialogue is clear and understandable, which is important because there are no subtitles.

The primary extra on this Blu-ray disc is an informative commentary track by film historian Richard Harland Smith. He provides a lot of background information about the cast members and he points out the differences between the film and the novel.

Joe Dante is on hand with his “Transfers from Hell” segment about Donovan’s Brain. Also included is the film’s stand-alone theatrical trailer, as well as trailers for The Black Sleep and The Magnetic Monster.

Donovan’s Brain is an intriguing entry in the “brain in a jar” genre of science fiction films and fans of the film are sure to enjoy this excellent Blu-ray release. An interesting trivia note: during the filming of Johnny Belinda in 1948, Lew Ayres was romantically involved with co-star Jane Wyman, who at the time was married to Ronald Reagan. In Donovan’s Brain he plays the husband of Janice Cory, who of course is played by Reagan’s second wife. During his commentary Richard Harland Smith wonders if that might have been an awkward situation for Ayres and Davis. 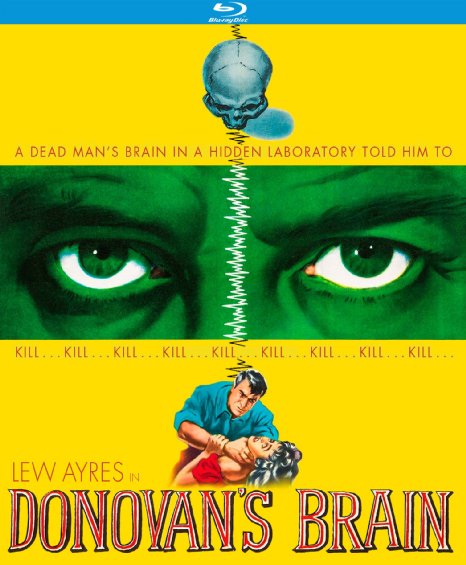