Forum List What's new Dark Style Change width
Log in Register
What's new Search
Menu
Log in
Register
Navigation
Install the app
More options
Dark Style
Close Menu
Posted on February 13, 2019 by Sam Posten
You are using an out of date browser. It may not display this or other websites correctly.
You should upgrade or use an alternative browser.

If you're a rat, then I'm the biggest mutt in the history of the Mafia. 4 Stars 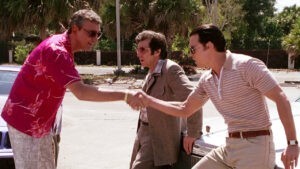 Aging street gangster / hit man Lefty (Al Pacino) takes a young hood jeweler Donnie Brasco (Johnny Depp) under his wing just as he’s passed over for promotion within the Mafia. What he doesn’t know is that Brasco is secretly a long term undercover agent for the FBI sent to take the organization down. Based on Agent Joe Pistone’s autobiographical 1988 memoir “Donnie Brasco: My Undercover Life in the Mafia.” and set as a character study, Donnie Brasco illustrates the long term effects of deep undercover on Brasco’s family, Lefty’s sad existance, and the paranoia that overtakes the boss, Sonny (Michael Madsen). Bruno Kirby is memorable as Nicky, a Mafia lieutenant who isn’t exactly a rocket scientist. Depp’s Brasco is the vehicle for making Lefty a sympathetic character, you can feel the love the two characters have for each other and even when Lefty becomes suspicious of Brasco he knows that if Brasco turns out to be a rat it’s himself that the mob will blame their downfall on and whack him for it. 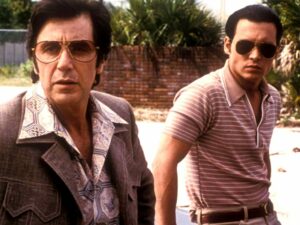 Unlike The Godfather or Goodfellas, Donnie Brasco gives the closest look at what being inside the modern (for ’97 at least) Mafia was like. Based on Pistone’s own experiences and wire recordings, the film captures the bravado and fading Italian influence New York street thugs. The most vile characters are somehow rendered sympathetic against the demands from mob bosses to produce on one hand and the FBI closing in on the other.

20 years later, the film holds up against others in the genre. Donnie Brasco probably has as many or more quotable lines as any other mob film as the colorful characters boast, steal and kill their way through the film. The iconic performances paired with the dual insights from fed and crook have made it a classic that deserves to be revisited and held in reverence with Scorsese’s best. 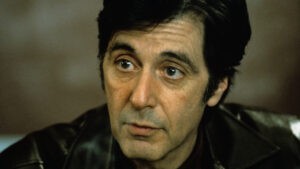 This blu nicely captures the original look and feel of the original theatrical cut, without a lot of flash. There’s notable grain in night scenes and dark basements but it was undoubtedly there in the original capture. Zero ring halos or other artifacts, it’s definitely a good looking film. It’s solid without having any scenes that draw attention to themselves, with the exception of Lefty lounging in Adidas track pants =) 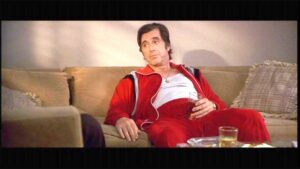 I was surprised to find a few interesting sound pans in this 5.1 mix, with the music pushing from the center screen to fill the room at appropriate times like in clubs and bars. For a mob film there’s limited gunplay and no big booms, so nothing to judge there.

There’s nothing but nothing here. The only choice on the menu is to play the movie. WEIRD! 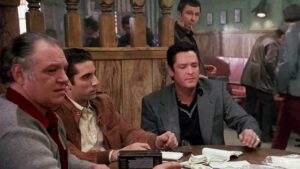 I don’t think I’ve rewatched Donnie Brasco since seeing it theatrically and this experience was likely better than the stereo and film based presentation I caught in a big box mall movieplex. At home it looks great on a 120″ screen and the 5.1 tracks got to breathe throughout my basement. It’s a bummer that there’s not a single extra, trailer, subtitle or ANYTHING to be found here, but the good news is you can get this right now on Amazon for $7.88. That’s a steal for this great of a movie. 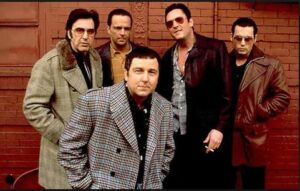 Great review. Sad to see the lack of extras though. This was one of my favorite films to quote for a long time after I saw it at the theater and the subsequent vhs purchase. “A Lincoln better than a Cadillac? Forgettaboutit!” I owned the DVD late on. I’m not a big fan of mafia/gangster films in general but this was an excellent take on the theme. Definitely a bargain price!

skylark68 said:
Great review. Sad to see the lack of extras though. Definitely a bargain price!
Click to expand...

Thanks! Agreed on all points.

We actually have a copy to give away. Post your favorite Depp or Pacino film below and I'll randomly pick a response to send it to Sunday evening. Must have been a HTF member before 2/13/19 and have at least 10 posts.

"Scent of a Woman"

Wow. I didn’t realize this was just coming out on BD now. I have the DVD, and had seen the HD stream on sale for $5 and was tempted to pull the trigger on that. If the BD is only a couple of bucks more, I may have to think about upgrading to th BD instead. I just assumed a BD had been available for awhile now. Thanks for the review, Sam.

Scott Merryfield said:
Wow. I didn’t realize this was just coming out on BD now. I have the DVD, and had seen the HD stream on sale for $5 and was tempted to pull the trigger on that. If the BD is only a couple of bucks more, I may have to think about upgrading to th BD instead. I just assumed a BD had been available for awhile now. Thanks for the review, Sam.
Click to expand...

Just to remind those that the 2007 Blu-ray had the extended film version which is 147 minutes. I bought that shorter version of the film from iTunes for that $4.99 price which has many extras. Anyhow, now I have both film versions.
Last edited: Feb 15, 2019

Congrats @skylark68 PM me your address and I will ship it to you. Thanks to Mill Creek for somehow sending a second copy =)
P

"Scent of a Woman"

Sam Posten said:
Congrats @skylark68 PM me your address and I will ship it to you.
Click to expand...

skylark68, I think you're disc could arrive a whole lot quicker if you simply give Mr. Posten my own personal address.
P.S. Congratulations.
Last edited: Feb 19, 2019
You must log in or register to reply here.