Could be much worse 4 Stars

Robert Downey Jr.’s first role after retiring the role of Iron Man/Tony Stark, Dolittle was shunned by critics and audiences alike during its brief (pre-pandemic) theatrical run earlier this year. Is it really that bad?

Queen Victoria (Jessie Buckley) has been poisoned and dispatches Lady Rose (Carmel Laniado) to retrieve Dr. John Dolittle (Robert Downey Jr.), who has become a recluse at his nature preserve and veterinary clinic since the death of his wife Lily (Kasia Smutniak). He spends his days playing chess with gorilla Chee-Chee (Rami Malek) using mice dressed up as the playing pieces, and other low-key diversions while hiding out like a hermit in his mansion with his animal friends. When Tommy Stubbins (Harry Collett) accidentally shoots a squirrel named Kevin (Craig Robinson) during a hunting expedition with his family, Dolittle’s parrot Poly (Emma Thompson) leads him to the estate so Dolittle can operate on him. After the surgery, Rose convinces Dolittle to return to London to help the Queen, because if the Queen dies Dolittle will lose his nature preserve and clinic. Tommy joins the doctor, along with Kevin, Chee-Chee, Poly, polar bear Yoshi (John Cena), ostrich Plimpton (Kumail Nanjiani), duck Dab-Dab (Octavia Spencer), and faithful dog Jip (Tom Holland). Upon arrival, Dolittle determines the poison used on the Queen, and sets out to retrieve the cure – the juice from the fruit of the Eden Tree, only found on a remote and uncharted island. Hot on his trail is former med school classmate Dr. Blair Müdfly (Michael Sheen), who detests Dolittle and has always felt slighted by him, hoping to discover the island himself to stop Dolittle from saving the Queen so that Lord Thomas Badgely (Jim Broadbent) can assume the throne.

It is fairly well-known, thanks to the internet, that Dolittle was a very troubled (and very expensive) production. Director Stephen Gaghan’s script was re-written by Dan Gregor & Doug Mand (How I Met Your Mother, My Crazy Ex-Girlfriend), underwent re-shoots with additional material written by an uncredited Chris McKay (The LEGO Movie) and directed by an uncredited Jonathan Liebesman (Wrath of the Titans), with its release date rescheduled numerous times. One of the problems may have been the fact that Gaghan was better known for writing and directing adult dramas like Syriana, and not known for lighter family comedies. Then there is Downey’s performance, who plays manic so well, but his Welsh (?) accent is all over the map. Michael Sheen as Müdfly and Antonio Banderas as crazy Pirate King Rassouli are around just enough, chewing the scenery and obviously having an all-out blast, to help more stubborn adults make it through this family adventure aimed at a very young audience. The computer animated animals created mostly by effects house MPC are very good, and the voice performances match the characters rather well. My wife and I enjoyed the movie for what it was, a light family entertainment, not really looking for anything more than that. To be fair, even the beloved classic Doctor Dolittle with Rex Harrison from 1967 was received much the same way upon its original release, receiving its fame years later thanks to airings on television.

Dolittle was captured at 8K resolution on Red Monstro 8K cameras and completed as a 2K digital intermediate in the 1.85:1 aspect ratio, presumably with Dolby Vision high dynamic range for its premium theatrical engagements (DV is listed in the end credits, but not under Technical Specs on IMDB). Universal’s upscaled 2160p HEVC-encoded transfer, with HDR10, HDR10+, and Dolby Vision high dynamic range, is a splendor to behold (this disc was reviewed on a display capable of HDR10 only). The transfer is bursting with detail, from the individual strands of fur in the animals, intricate fabric textures, even blades of grass during the opening scenes. Colors are lush and natural, with deeply shaded hues that help provide a sense of depth. The green grass on the Dolittle Estate appears, well, green, while the Blu-ray presents them as a smidge more yellow. Contrast is also excellent, with deep blacks that never appear crushed, retaining even the smallest of shadow details, as evidenced in the sequence within the dragon’s lair. This is truly one of the best 4K upscale transfers I’ve seen in a long time.

The default Dolby Atmos track nicely matches the level of detail that the video on this disc provides. The mix ranges from subtle (boards creaking, wind blowing, water churning) to bombastic (explosions, bear roars, whale calls, etc.). Sounds are placed with precision within the listening environment and move seamlessly around the room as necessary. LFE is strong without ever being boomy, providing some nice rumble during explosions and large animal footsteps. Dialogue is well-prioritized, clear and understandable (except when Downey’s accent gets indistinguishable).

Robert Downey Jr. and his wife Susan, both of whom produced this movie (along with many others) appear in all six of the family-friendly featurettes, available on both the UHD and Blu-ray discs.

Digital Copy: An insert contains a code to redeem a digital copy (in UHD where available) on Movies Anywhere. Sadly, as with most Universal releases, code redemption only gets you the movie (unless you have an Apple TV device).

If you are willing to put your mind on hold and are looking for a movie to watch with the kids while home following social distancing and Stay at Home measures, Dolittle makes for a mild distraction for a little over 90 minutes (not including credits). 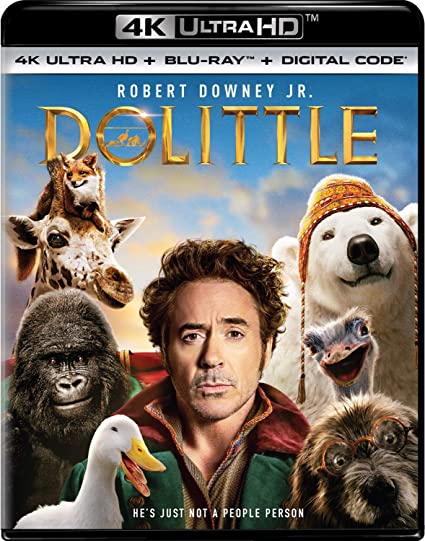