Posted on April 16, 2018 by Sam Posten
Nothing can destroy the Doctor! 4 Stars

Clueless professor Clifford Skridlow (Dan Aykroyd) is caught in two jams. His parents are relying on him to impress potential donor just as he becomes the patsy for Chicago pimp Smooth Walker (Howard Hesseman). Smooth is being shaken down by mob boss Mom (Kate Murtagh) and leaves Clifford holding the bag. Clifford falls under the spell of Smooth’s harem, 4 high class call girls (Donna Dixon, Fran Dresher, Lydia Lei, Lynn Whitfield) and must somehow protect them and their handler, Diavolo (TK Carter). With help from the school’s drama department and Clifford’s love of chivalry, the badass persona of Dr. Detroit is born! Dr. Detroit must shut Mom down while Clifford figures out how to keep the school going. 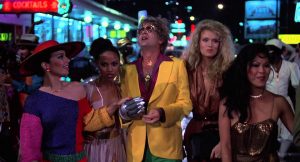 If you had asked me in circa 1985 what the best movie ever made was, well I’d have rattled off the Star Wars series.  But close after that I would have suggested Dr. Detroit, which became an instant hit on early cable movie channels and on VHS.  There was something that just sparked this silly movie into being bigger than it had any right to be.  Devo’s catchy main theme and James Brown performing “Get up offa that thing” at the climax of the film certainly helped, as did the sexy but never naked troupe of damsels in distress.  Hessemen was on fire from WKRP and Aykroyd still reeling from the loss of his friend and comedy partner John Belushi.

And then there is the good Dr. Himself.  Mixing a sporty and ostentatious disco outfit with knightly gauntlets, a marijuana leaf necklace, fuzzed out hair and an accent not matched until Heath Ledger reprised it as The Joker, Aykroyd’s creation was way more than the sum of it’s collective parts.

Sadly, it doesn’t -entirely- hold up, but the action sequence in a junkyard and the James Brown finale do, at least.  Ah, to be 14 again and sneaking peeks at R rated flicks through manipulating cable boxes! 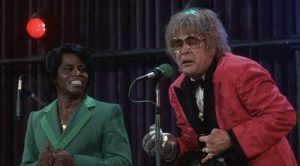 Dr. Detroit was shot on a modest budget (for a comedy) circa 1983, and as such it looks pretty decent on this transfer.  There’s nothing to rave about but no major flaws either.   There’s some grain during the night scenes but not too much, and no ugly halos or other distracting elements.  It looks good for the era at least!

There’s a feature length audio commentary with director Michael Pressman and historian Russell Dyball.  I skipped that but did really dig the new interview with Pressmen sitting in his office.  That is very fun and well worth your time, as he recounts antics from the set and how the original draft morphed into something wildly different.

The REALLY interesting extra here is a neat capture of a set of LPs that were sent out to radio and TV stations to promote the film.  The clips here were cut up by each individual station to fake interviews and add spark.  There’s even a few clips from Belushi talking about Aykroyd, which I found spooky.

There’s a photo gallery which looked absolutely terrible, I noped out after the first 5.

Finally there is the theatrical trailer and a few TV and radio ads.

Overall it was just enough to satisfy my nostalgia and I moved on.  Sadly, there are no plans to make the promised sequel…

Tom Wolfe famously said “You can’t go home again”, but for about 3 hours this weekend I was transported back to 1985 or so.  Just long enough to visit with a film I hadn’t thought much about in 30 years.  It’s a fun trip and I endorse you taking a ride if you remember this film as warmly as I do or if you are a fan of Aykroyd.  Don’t go in with heavy expectations more than that and you will not be disappointed! 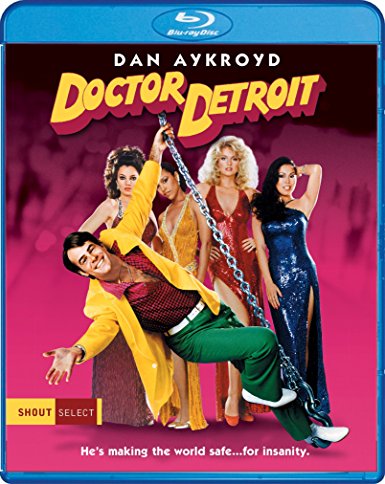