Forum List What's new Dark Style Change width
Log in Register
What's new Search
Menu
Log in
Register
Navigation
Install the app
More options
Dark Style
Close Menu
Posted on July 14, 2016 by Todd Erwin
You are using an out of date browser. It may not display this or other websites correctly.
You should upgrade or use an alternative browser.
Overly long introduction to the series 3.5 Stars

Young Adult novels, regardless of the quality of their prose or originality, became a hot item in Hollywood after the success of the Twilight series. So it came as no real surprise that Summit, who hit gold with Twilight, quickly acquired The Divergent Series from author Veronica Roth. The first entry (and its successors) comes off as a Hunger Games lite, lacking the epic scope of that series.

Like many movies based on YA (Young Adult) novels, Divergent is set in a post-apocalyptic world (in this case, Chicago), where the citizens are divided by factions: the selfless Abnegation, peaceful Amity, honest Candor, brave (and militaristic) Dauntless, and intellectual (and fascist) Erudite. When children approach a certain age, they are tested and given the results to suggest which faction to join. As the film opens, Tris Prior (Shailene Woodley) and her older brother Caleb (Ansel Elgort) are given their tests, but Tori (Maggie Q), the woman who administers the test to Tris, doesn’t like what she sees, stops the test, and sends her home, telling her to choose the faction she was born into, Abnegation. At the Choosing Ceremony the next day, Tris and Caleb leave Abnegation, instead choosing to join Abnegation and Erudite respectively. However, there are growing tensions between Abnegation and Erudite, with the Erudite leader, Jeanine (Kate Winslet), looking to overthrow and wipe Abnegation from existence. But there is an even bigger threat to Jeanine, and that is the rise of people that share all of the qualities of each faction known as Divergents. During her Dauntless training under commander Four (Theo James), Tris and Four discover that she is Divergent (as is Four), which becomes an even larger threat when Jeanine employs Dauntless to carry out her task of destroying Abnegation, including Tris’ parents (Ashley Judd and Tony Goldwyn).

It’s the performances that really carry Divergent. Shailene Woodley brings a naivete and innocence to Tris that allows us to believe her transformation to freedom fighter by the end of the film. Theo James has a screen presence that is used to good effect here as the future love interest for Tris. Kate Winslet makes a good villain as Jeanine, both here and in the sequel, Insurgent, believing that what she is doing is for the better of humankind. Where the movie falters is in its lack of originality (its parallels with The Hunger Games are often blatantly obvious) as well as its storytelling, which often feels like its going through the motions, taking us from point A to point B, without ever really involving us in the story. Director Nick Burger does what he can with the material, but Divergent could have easily shed 20-30 minutes to make it a tighter film (but that would have likely upset fans of the book).

Divergent was completed as a digital intermediate in 2K resolution, so once again we have a transfer that has been upscaled to 4K with high dynamic range applied. The result is a minimal increase in detail, but with slightly improved colors and contrast over the previous 1080p Blu-ray release (which is included in this set). Where the improved contrast is most beneficial is in the deep caverns of Dauntless headquarters, as well as the various gradations of black in the Dauntless uniforms (their black t-shirts don’t blend in to the black jackets as much as they appear to do on the Blu-ray).

Lionsgate has improved upon the DTS-HD Master Audio track created for the 1080p Blu-ray by upgrading it to DTS-X for this 4K UHD release. Where this new track shines is in its surround activity, giving the viewer a slightly more immersive experience, particularly during the action sequences. Dialogue remains clear and directed mostly to the center channel, never getting lost in the mix. LFE is also used quite effectively, giving Junkie XL’s score a deeper low end.

As with most of Lionsgate’s 4K UHD releases, there are no bonus features on the 4K disc. Instead, the Blu-ray release has been included here, which contains a decent set of features.

Audio Commentary with Director Nick Burger: Burger discusses facts about making the movie, but their are long pauses in many spots.

Audio Commentary with Producers Douglas Wick and Lucy Fisher: This is a much more lively track, with lots of information on various aspects of the making of the film.

Bringing “Divergent” to Life (1080p: 47:17): A set of four featurettes (A Bold Beginning, Becomming Divergent, The Epic Experiance, and A Fearless Finish), which can be played as one long feature or individually, covering such topics as casting, bringing the novel to the screen, and production.

Poster Gallery (1080p): A collection of seven character posters are featured, two per screen, plus a one-sheet and banner/billboard posters.

Divergent in 4K is not quite worth the upgrade, especially for those who already own the Blu-ray edition, although the disc does provide minimal increases in picture and audio quality. 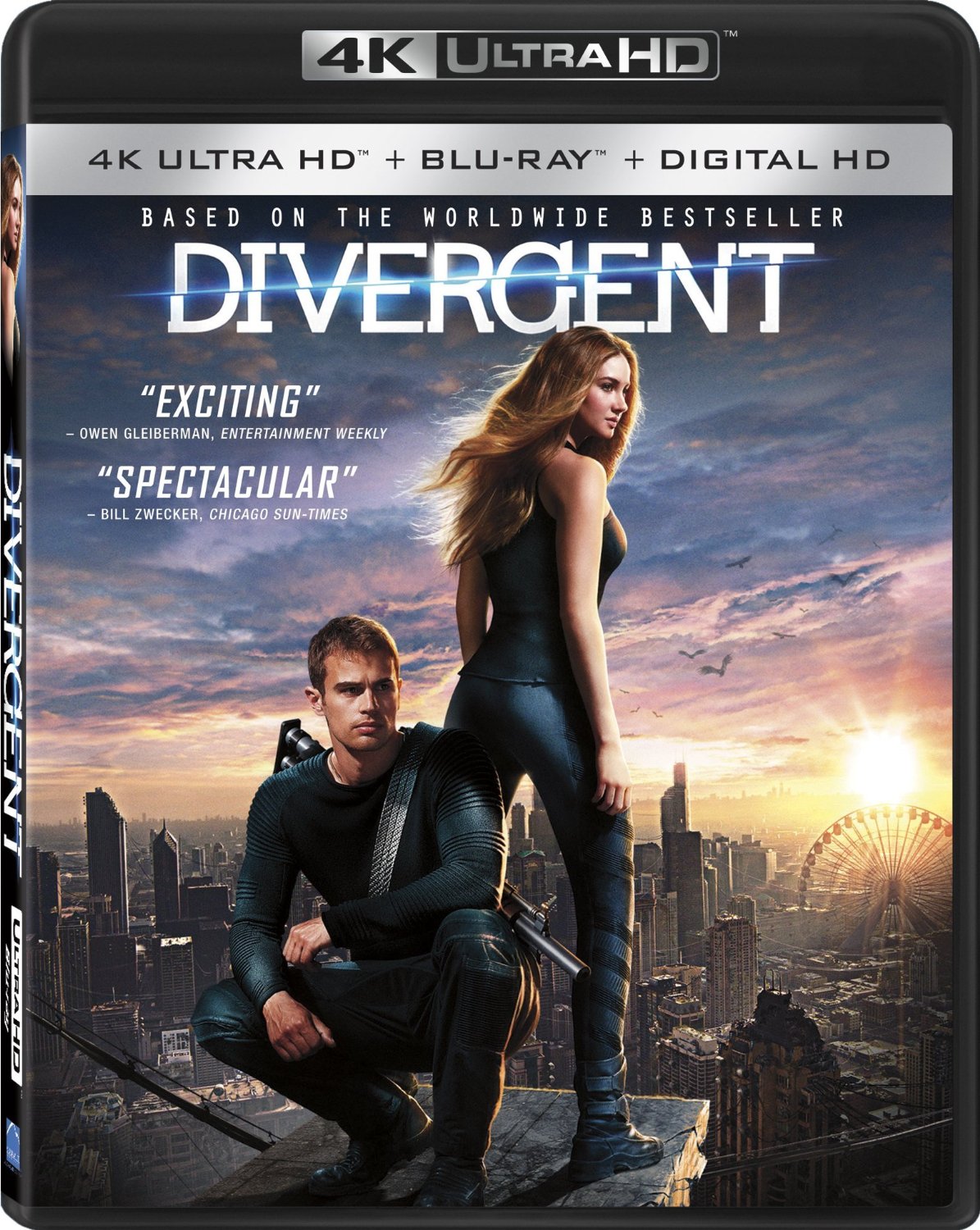