An alien spaceship has docked over Johannesburg, South Africa, seemingly suffering a breakdown of some sort. The military in South Africa have relocated the nearly one million aliens on board to a ghetto area named District 9. Nearly thirty years later, the district having degraded into a slum, weapons manufacturer Multinational United (MNU) wants to reclaim the land and relocate the aliens from their shacks in District 9 to tents in the new District 10. Wikus Van De Merwe (Sharlto Copley), not exactly leadership material but happens to be the son in-law of MNU executive Piet Smit (Louis Minaar), has been placed in charge of evicting and relocating the aliens, nicknamed “prawns.” The eviction notices and relocation does not go according to plan, with the ever curious Wikus coming across a mysterious canister inside one of the prawn’s shacks that sprays him in the face with an unknown liquid. This begins a rapid genetic mutation of his body, slowly metamorphosing into a prawn as MNU begins to conduct biological experiments on Wikus, realizing that he may hold the key to unlocking the DNA code embedded into the prawns’ weaponry. Wikus manages to escape from MNU headquarters, finding his way back to District 9 and finding the owner of the canister that infected him, Christopher Johnson (Jason Cope, who also plays a human correspondent who is interviewed throughout the film). Christopher’s canister actually contains a rare fuel that he spent the last twenty years developing, hoping to escape with his son aboard a hidden shuttle and back to the mother ship to save his people. Christopher tells Wikus that he can heal him, but they need the canister in order to return to the mother ship. The two form an unlikely partnership, having to raid MNU headquarters to take back the fuel canister.

District 9 starts out as a pseudo-documentary, giving the viewer the necessary back story of the aliens and continues in that mode as Wikus begins to evict the prawns, but eventually settles on a more traditional story-telling approach as Wikus begins his transformation. District 9 is certainly not for everyone – there is plenty of blood splatter, gore, and violence that help it earn its R rating. First-time director Neill Blomkamp (Elysium, Chappie), who co-wrote the screenplay with his wife Terri Tatchell, tells an interesting story of segregation and the horrors of modern-day concentration camps, but also a touching story of an alien who just wants to take his boy back home. Sharlto Copley, who had very little acting experience prior to this film, turns in a strong performance as the doomed Wikus, who gains a promotion but in doing so loses everything he’s worked for, including his wife.

District 9 was filmed primarily in 4K resolution with RED One cameras, using XDCAM 1080p footage to replicate much of the news coverage and documentary footage, and completed as a 2K digital intermediate in the 1.85:1 aspect ratio. Since most of the documentary and news coverage takes place early on, at first it appears like the 2160p upscale isn’t going to really help out all that much, but as the film moves away from the pseudo-documentary style, there is a slight increase in detail and contrast improves greatly as the subtle application of HDR10 high dynamic range begins to become more apparent. There is still some noticeable noise in the picture during some of the lower lit scenes inside Christopher’s shack, for example, but that may be intentional.

Sony has given District 9 a nice Dolby Atmos upgrade that fully immerses the viewer into the environment of prawn encampment. PA announcements both from overhead helicopters and inside the MNU labs actually sound like they are above you. Sounds also move much more seamlessly within the viewing area than on the DTS-HD MA 5.1 track that has also been included. LFE is strong, giving more weight to explosions and gunfire. Dialogue is clear and understandable throughout.

UHD Disc
Comic-Con Extravaganza (1080i; 17:18): Coverage of the first screening of the film at the famous San Diego convention, plus the panel discussion, along with interviews.

Joburg From Above: Satellite and Schematics of the World of “District 9” – Interactive Map

Digital Copy: An insert contains a code to redeem a digital copy in UHD on Movies Anywhere. The code can also be used to redeem points on Sony Rewards to earn a free digital movie. 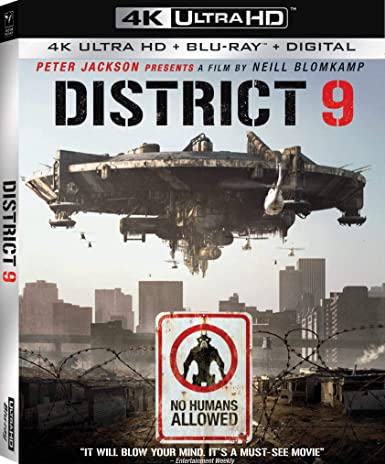