Forum List What's new Dark Style Change width
Log in Register
What's new Search
Menu
Log in
Register
Navigation
Install the app
More options
Dark Style
Close Menu
Posted on August 9, 2017 by Todd Erwin
You are using an out of date browser. It may not display this or other websites correctly.
You should upgrade or use an alternative browser.

On Thursday, August 3, 2017, Walt Disney Home Entertainment and Marvel Studios invited the press to get a sneak peek at some of the Bonus Features to be included with the Digital HD, Blu-ray, and 4K UHD Blu-ray editions of Guardians of the Galaxy, Vol. 2, due out on digital platforms on August 8 and on disc formats on August 22. The bonus features we got to look at were three of the four parts that comprise The Making of “Guardians of the Galaxy, Vol. 2,” which were In the Director’s Chair with James Gunn (a brief glimpse into how Gunn brought the band back together for another mega-hit), Reunion Tour: The Music of “Guardians of the Galaxy, Vol. 2” (a look at how the music plays a central part in the storytelling process), and Showtime: The Cast of Vol. 2 (a rather self-explanatory look at the cast and characters, both new and old).

We were then treated to a visit by Director James Gunn and actor/singer David Hasselhoff, who introduced the new music video for Inferno, a disco-ized version of the Guardians of the Galaxy theme, which Gunn created as an homage to the disco-ized themes from Star Wars and Close Encounters of the Third Kind that assaulted our senses back in 1977. (I apologize up front for the quality of the videos shot at Disney Studios, as they were shot from my smart phone under low light situations).

Gunn and Hasselhoff then discussed making the video (which features all of the stars of from the film), and then took questions from the audience. The discussion veered rather quickly to asking Gunn about the 4k UHD release, but unfortunately the moderator tried to steer the focus back on Inferno, saying we would have the opportunity to ask Gunn more specific questions during the one-on-one interviews (which most in the audience were not invited to attend). Thankfully, Gunn was able to get a few words out as to why he pushed so hard for his film to be Disney’s first 4K UHD release for the home market.

We were then invited upstairs to view a sampling of Guardians of the Galaxy, Vol. 2 in a side-by-side comparison on two identical LG OLED UHD displays from the soon to be released disc playing on an OPPO UHD player, viewing the film in 4K UHD with HDR turned off on the left and with HDR10 turned on on the right. The difference was noticeable in how the HDR10 version handled contrast and color. HDR is done rather tastefully here, maintaining the original intent while providing more detail in cloud formations which appeared almost completely blown out in white on the non-HDR display. Matt Hough will have a more detailed review of the disc later this month. As for why HDR10 and not Dolby Vision, Disney reps said that, to provide the best home experience and meet the street date, they decided to go with HDR10 for the disc version (to date, there have only been a handful of DV-capable titles released and only OPPO has released a firmware update to enable DV on their players), yet VUDU will have DV on their UHD version. Disney reps also mentioned that they are on-board for UHD, likely on most major new releases, but no other titles to announce other than Pirates of the Caribbean: Dead Men Tell No Tales which was announced days after Guardians.

I can think of one bonus feature to add to the above: 3D.

Yeah- did they have the 3D and 2D versions playing side by side as well? I ordered the Best Buy set with both so I'll eventually watch the 4K disc in lousy 2D, but I doubt I'll be impressed.
You must log in or register to reply here.

A Question/Possible Issue Regarding HOBBS AND SHAW UHD Blu-ray... 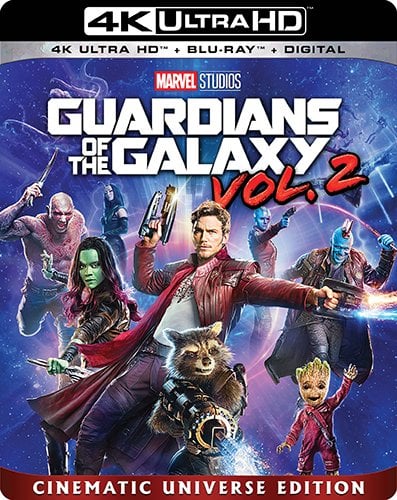