Forum List What's new Dark Style Change width
Log in Register
What's new Search
Menu
Log in
Register
Navigation
Install the app
More options
Dark Style
Close Menu
Posted on December 19, 2016 by Matt Hough
You are using an out of date browser. It may not display this or other websites correctly.
You should upgrade or use an alternative browser.
Uneven psychological horror movie scares only momentarily. 2.5 Stars

The Disappointments Room may be named aptly: it’s a reasonably well set-up thriller that devolves into a disappointing ghost story with an unsatisfying and unsubstantiated denouement.

Doesn’t this sound familiar: a married couple with tragedy in its past moves with their young child into a spooky country home where horrific visions and unexplained events begin to happen? That’s the premise for D.J. Caruso’s The Disappointments Room, a moody but ultimately disappointing psychological horror thriller that’s predictable and unexplainable all at the same time. While we get some scares and there are some welcome veterans in the cast, the end result is more irritating than titillating leaving the viewer with the feeling that’s there’s a missing act somewhere in the narrative.

After the accidental death of their young daughter, Dana (Kate Beckinsale) and David (Mel Raido) Barrow together with young son Lucas (Duncan Joiner) try to make a fresh start out of the city in a lovely old home that’s been empty for quite some time. The old Blacker House has its own history of unhappiness with the house’s original owner Judge Blacker (Gerald McRaney) and his wife (Jennifer Leigh Mann) nursing a secret behind the closed door of their disappointments room, an isolated chamber used for hiding family members with severe birth defects from the outside world. Dana, who’s on medication for her depression but has stopped taking it, begins to have visions about the house’s former residents, visions that seem as real to her as her own family, and when weird things begin happening, she’s convinced Blacker’s ghost and the spirits of his tragedy continue to haunt the manse where Dana and her family are attempting to create a new existence for their family.

While screenwriter Wentworth Miller has borrowed liberally from previous ghost stories in setting up the core family of the story (Burnt Offerings seems a very close relative to this movie, and there is more than a touch of The Shining here as well), his utilization of the disappointments room (a historically true occurrence) is a rather fresh one teeming with possibilities. Too bad that it turns into a very predictable and ultimately nonsensical ghost story featuring events that aren’t made clear whether they happened or not (cases in point, the murder of the pet cat and the hanging death of handyman Ben played by Lucas Till and the existences of the Blacker family ghosts in present day) and filled with the usual director tricks of inconsequential “boo” moments punctuated by a screeching soundtrack while peppering the mise-en-scène with bloody imagery (most often nightmares or hallucinations), plenty of unexplained moans and groans on the soundtrack, and events made to seem important that turn out to be nothing. Caruso also utilizes quick flashbacks to inevitably give us the background on the tragedy suffered by the Barrows, information that might have been more wisely served earlier in the movie rather than revealing Dana’s instability in small stages.

Kate Beckinsale gives Dana her all in trying to establish her disturbed architect trying to regain a hold on reality but failing miserably, but she seems a bit letdown by screenwriter and director. Mel Raido as husband David is sketchily drawn (does he have an occupation? There is some mention of his making phone calls to the Far East, but we’re never clued in to his story, another lapse of the narrative), and Lucas Till shows up to add a hunky dash of sexual threat to the proceedings without actually accomplishing much of anything. Duncan Joiner as five-year old Lucas makes a convenient target for the vengeful ghosts (he seems to see them, too, just like his mother, but that also isn’t explained), and Marcia de Rousse as local historian Ms. Judith who serves as this film’s Zelda Rubenstein (even she admits she watches Poltergeist too much, another movie that’s a kissing cousin to this one) has an amusing scene or two. So does Celia Weston as an overly friendly general store manager. In the flashbacks, Gerald McRaney makes a severe, sinister paterfamilias while Ella Jones as his deformed daughter and Jennifer Leigh Mann as the mother serve amply in their respective roles.

The film’s 2.40:1 theatrical aspect ratio is faithfully rendered in this impressive transfer that’s been anamorphically enhanced for widescreen televisions. Sharpness for standard definition is really outstanding, and color values are first-rate with believable skin tones (the ghostly flashbacks have been naturally desaturated) and all the blood the proper shade of red. Contrast has been consistently and masterfully applied while black levels are very good. There are no noticeable problems with moiré or aliasing. The movie has been divided into 20 chapters.

The Dolby Digital 5.1 sound mix offers a very stimulating and immersive aural experience. The creaks, moans, and flutters throughout the house get a nice spread through the soundstage, and the dripping water (naturally it’s raining when the family arrives for their first night in the house) gets pinpointed placement in each of the available channels. A flurry of bats gets panned through the soundfield to great effect at one moment, and the score by Brian Tyler and the various shrieking punctuations to the “boo” moments likewise make a firm impact. Dialogue has been placed in the center channel.

The Disappointments Room may be named aptly: it’s a reasonably well set-up thriller that devolves into a disappointing ghost story with an unsatisfying and unsubstantiated denouement. With only a DVD release on home video (high definition is being offered only on digital download), it doesn’t seem as if the studio had much faith in this uneven enterprise.

So I guess it is safe to say that this movie was a ...... disappointment?

It's very risky for filmmakers to give a movie a title like that. It encourages sniping puns from critics who didn't like it.
You must log in or register to reply here. 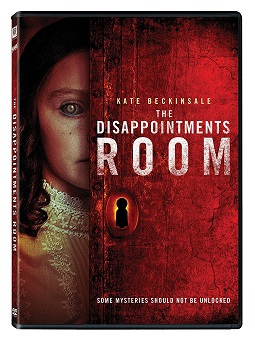