Forum List What's new Dark Style Change width
Log in Register
What's new Search
Menu
Log in
Register
Navigation
Install the app
More options
Dark Style
Close Menu
Posted on May 27, 2018 by Neil Middlemiss
You are using an out of date browser. It may not display this or other websites correctly.
You should upgrade or use an alternative browser.
A sensational 4K release of a classic action film 5 Stars

Die Hard isn’t just a perfect action film, it’s a brilliant Christmas movie just right for enjoying on a Christmas Eve when a Home Alone, White Christmas or Scrooged just won’t do. I’ve watched Die Hard so many times I can’t even count and spun it on Christmas Eve regularly. It never gets old. The film unfolds with a confident precision, and with heart, wit, and an abundance of great ideas expressed expertly behind and in front of the camera. This is action cinema at its very best with an abundance of memorable, quotable dialogue.

“Welcome to the party, Pal!”

New York Detective Lieutenant, John McClane, arrives in Los Angeles to see his estranged wife during a Christmas Eve party at the Nakatomi Plaza, the high-rise headquarters where she works. However, the evening is interrupted when international ‘terrorists’ seize the building, taking everyone hostage, except one man-John McClane-who will do everything in his power to upset their plans, save his wife and the other hostages, and somehow make it out alive.

Die Hard is a perfect, superbly constructed, filmed, performed, architected and produced action film. Before the era of computer generated imagery exploded, if you’ll pardon the pun, and made nothing impossible in action sequences shown, Die Hard creates a number of sizzling, impressive action sequences just as exciting today as they were in 1988. The talent in front of the camera helps turn Die Hard into something special. Bruce Willis surprised the world with his heroic blue-collar hero, Reginald VelJohnson is wonderful as the beat cop who becomes McClane’s lifeline to the outside world, Bonnie Bedelia strong and resourceful as John’s estranged wife, Holly, and of course, Alan Rickman turns in a legendary performance as the villain, Hans Gruber. Matching that onscreen talent is a perfect storm of expert talent behind the scenes. John McTiernan (The Hunt for Red October) has never been better, staging ratcheting tensions and exciting sequences of action. Serving as his Director of Photography, Jan de Bont’s unmistakable lensing brings a terrifically lit sense of space and location. Michael Kamen’s brassy, tense, Christmas and Classical-tinged score is in the DNA of the film and inextricably linked to the experience, and I have to give a shout-out to Costume Designer Marilyn Vance who brings out the “European” in the terrorists, and through the simplicity of a white undershirt, gives cinema one of its most memorable action-hero outfits.

Die Hard is brimming with characters you remember even if you’re not entirely sure of their names. From menacing terrorists with various scowls and little moments that firmly implant them in your recall (like the late Alexander Godunov who played the menacing Karl), to the pathetic Deputy Police Chief (Paul Gleason) and the overconfident F.B.I agents (Robert Davi and Grand L. Bush), everything and everyone works. In addition, as much as Alan Rickman has been lauded as a show stealer – and that praise is deserved – the film just wouldn’t work without the hero Bruce Willis delivers. At the tail end of an era of super-muscular action heroes, Bruce Willis’ wise-cracking, everyday cop, while no physical slouch, trades on the ordinary in extraordinary circumstance. It isn’t easy to spend a lot of your screen time talking to yourself and offering up memorable quips (“Nine million terrorists in the world and I gotta kill one with feet smaller than my sister.” However, Willis pulls it off, creating a character in John McClane that believably rises to the desperate occasion on equal parts smarts and luck, and gives Die Hard its entertaining, enduring core.

Die Hard delights in its own simplicity. Breaking it down, it’s a heist film where the bad guy’s perfect plan is spoiled by a good guy in the right place at the right time. However, it isn’t really just about the robbery gone wrong. It’s a battle of wits between the erudite, precise criminal mastermind, and a plucky, imprecise New York Cop. McLane, already a fish out of water out in L.A., always seems to be one step behind as he battles it out with bad guys in and around the abandoned floors of a still-under-construction building. It’s an action film that thrives on the conversations around the action. The banter between Gruber and McClane, the talks McLane has with himself, or over the radio with Sgt. Powell, and the uneasy conversations between a stubborn cop and his estranged wife, all help build characters and moments that matter far more at the end of the day than the impressive action and stunt work.

I was 13 or 14 when Die Hard hit UK cinemas. My older brother went with friends to see the film and he raved about it. I was frustrated that I wouldn’t be allowed in to the cinema to see the film (even when I was 20 years old, I looked 15, so there was no way I’d fool a ticket clerk). In many ways, that strong urge to see a movie I felt old enough to see, but wasn’t allowed to, made a mark on me. When Die Hard came out for the home market and I finally saw it (panned and scanned and VHS) it landed high on my favorite films list right away and hasn’t budged in all the years since.

Simply put, Die Hard has never looked this good at home. I’ve become accustomed to the less than stellar way this film has looked in previous home incarnations. Since the very soft days of pan & scan VHS, then later in the widescreen VHS box-set release I picked up, to the first appearance on Blu-ray, there have always been challenges. Now, in 4K UHD, with what seems to me to be a perfect application of HDR, Die Hard is a revelation.

As the esteemed Robert A. Harris mentions in his “A Few Words About…” thread, Die Hard is presented with “Full film resolution, with requisite grain, perfect color, deep rich blacks, and stable as a rock.” That’s high praise and right on the money.

What impresses me most about watching Die Hard on my new 65” 4K display is those delicious black-levels, the clarity and wonderful contrasts, and the even, natural, consistent colors. Remember when you went from watching Die Hard in pan & scan to widescreen? Yeah, this 4K UHD release is much like that in the level of detail and perfection over previous HD releases. I have always loved the look of Die Hard, especially the way director John McTiernan and Cinematographer Jan de Bont shot it, and this is the best I have ever seen it.

Fox provides an active DTS-HD Master Audio 5.1 track. Aggressive, well-balanced, and alive in the surrounds when the explosion of glass and steel demand it. Gun fire is particularly punchy, and the crash, bang and wallop of hand-to-hand fights on rooftops and around unfinished office construction sites (with notoriously exaggerated sound effects for punches), get good play in the audio as well.

Low frequency effects underpin the action very nicely, and give a floor-shaking boom when the bang is big enough. Dialogue is mainly focused in the center channel, and is free from issues.

Matt Hough described the special features in his 25th Anniversary review of the Die Hard Collection as follows:

The disc offers two commentary tracks. The first is an edited track featuring director John McTiernan and production designer Jackson DeGovia. The second features special effects supervisor Richard Edlund commenting in ten selected chapters of the film (which are in the menu and can be selected separately). Fans of the film will want to hear the anecdotes of all these men whose work made the film so distinctive.

The viewer may select up to ten chapters of the film as favorite choices to watch without going through the entire movie.

The newscasts which appear in the film are offered in raw footage form (with outtakes) that runs 8 minutes.

An interactive stills gallery features sketches, blueprints, stills, and portraits from the film in a slide show format that runs 9 ½ minutes. During the montage, the viewer is allowed to branch off into other choices where additional drawings and even deleted scenes can be found.

Available on the 4K UHD Disc

Previously available special features from the prior Blu-ray release:

Die Hard isn’t just a perfect action film, it’s a brilliant Christmas movie just right for enjoying on a Christmas Eve when a Home Alone, White Christmas or Scrooged just won’t do. I’ve watched Die Hard so many times I can’t even count and spun it on Christmas Eve regularly. It never gets old. The film unfolds with a confident precision, and with heart, wit, and an abundance of great ideas expressed expertly behind and in front of the camera. This is action cinema at its very best with an abundance of memorable, quotable dialogue.

A Christmas movie???? I'm not so sure, but it's a great action movie. Thank you for the review.

Robert Crawford said:
A Christmas movie???? I'm not so sure, but it's a great action movie. Thank you for the review.
Click to expand...

If we can have Christmas comedies (A Christmas Story, Scrooged, etc.), Christmas dramas (It's a Wonderful Life), Christmas musicals (White Christmas), why can't we have a Christmas action movie?

Seriously, we usually watch Die Hard during the holiday season. It felt odd watching the UHD last week so far removed from Christmas.

Scott Merryfield said:
If we can have Christmas comedies (A Christmas Story, Scrooged, etc.), Christmas dramas (It's a Wonderful Life), Christmas musicals (White Christmas), why can't we have a Christmas action movie?

Seriously, we usually watch Die Hard during the holiday season. It felt odd watching the UHD last week so far removed from Christmas.
Click to expand...

Seriously, I have my Christmas western in 3 Godfathers. Damn, I wish I can have that John Wayne film in 1080p in gorgeous Technicolor. I love listening to people arguing about what is a Christmas movie and what's not with Die Hard, Gremlins and Trading Places among the titles being debated. Man, do those arguments get passionate and I just laugh at the emotions being displayed.
You must log in or register to reply here. 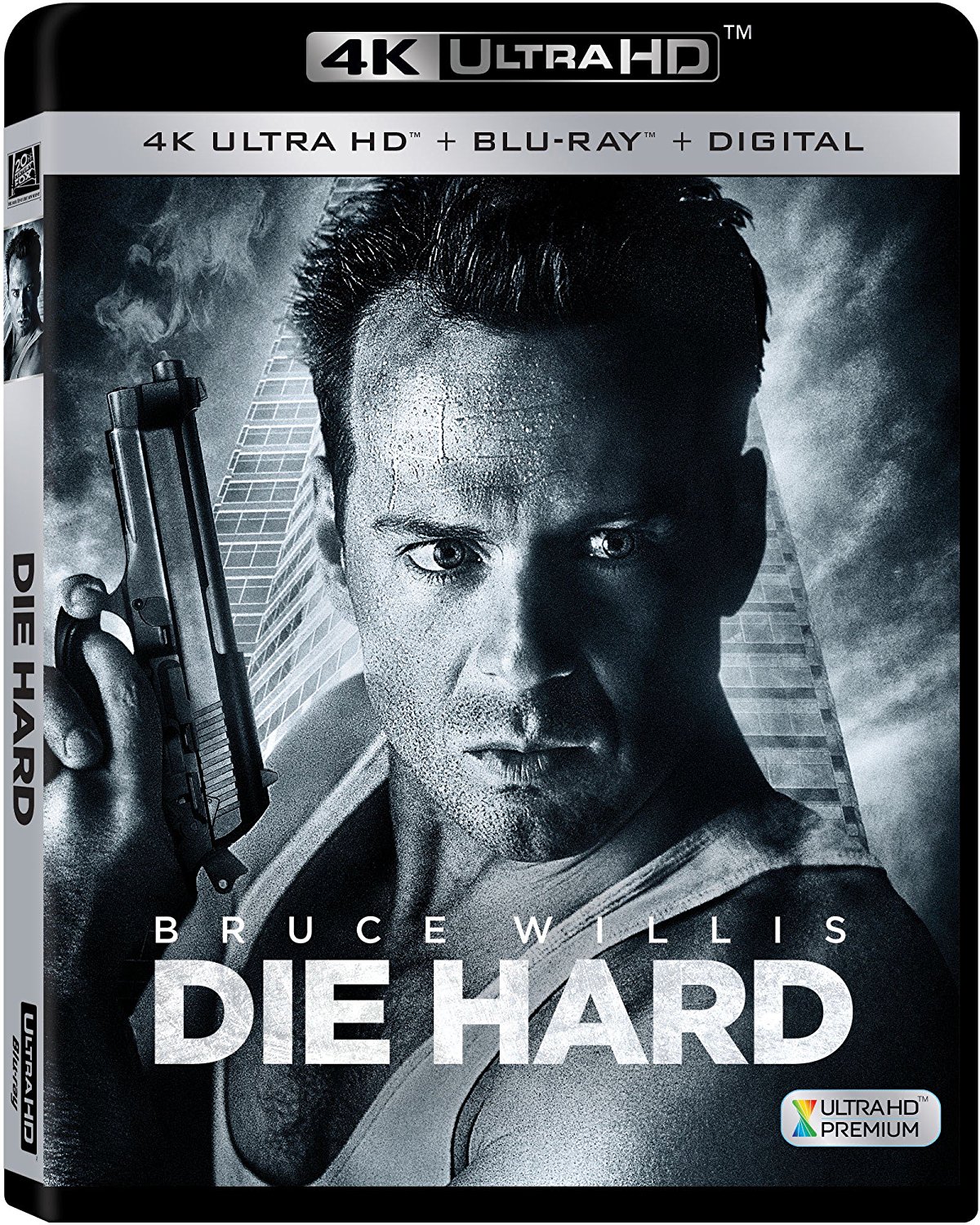